Ischemic stroke due to lack of cerebral blood supply is one of the most common causes leading to death or disability in adults worldwide [1]. However, both animal studies and clinical finding revealed that reperfusion following ischemia results in delayed neuronal injury or death [2,3]. Although the modes of neuronal death caused by cerebral ischemia and reperfusion still need to be elucidated, both in vivo and in vitro studies have shown that apoptosis is a common form of neuronal death following ischemia and reperfusion [4,5]. Other pathological conditions such as traumatic brain injury or neurodegenerative diseases would cause neuronal apoptosis as well [6,7]. By contrast, suppression of apoptosis has been demonstrated to be the main mechanism underlying the protective effects of some chemicals against neuronal death [8,9]. In addition, it is found that the protective effects of ischemic postconditioning and preconditioning on neuronal death induced by ischemia and reperfusion are associated with inhibition of apoptosis [10]. Thus, these previous studies not only show that apoptosis plays an important role in neuronal death caused by various pathological stresses, but also indicate that anti-apoptosis might be a strategy to prevent or alleviate neuronal damage induced by ischemia and reperfusion.
Ginseng, the root of Panax ginseng C.A. Meyer, has been a very important component of Chinese prescriptions for thousands of years [11]. Until now, part of the components of ginseng have been isolated and over 40 ginsenosides have been identified [11], among which ginsenoside Rb1 (GRb1) has been extensively studied and found to have multiple biological functions including anti-inflammation, anti-apoptosis and induction of neurogenesis properties [12,13,14]. In particular, GRb1 has been demonstrated to inhibit ischemia- and reperfusion-induced cellular death in the heart, liver and brain [15,16,17]. Thus, GRb1 might be a potential medicine used for the treatment of cerebral injury caused by ischemia and reperfusion.
Recently, it was reported that the protection of GRb1 against neuronal death is correlated with its anti-apoptosis effects [11], despite the fact its underlying mechanism is still elusive. Neuronal apoptosis following cerebral ischemia and reperfusion is found to be related to many factors, such as oxidative stress, endoplasmic reticulum stress, neuroinflammation, and activation of apoptosis associated signal pathways [18,19,20,21]. However, accumulating evidence has shown that the mitochondrion is an important organelle in modulating cellular apoptosis. Exogenous or endogenous stress could make mitochondria lose mitochondrial complex-I activity, depolarize mitochondrial membrane potentials, and release of apoptosis inducing factor (AIF) [22]. Protection of mitochondria has showed anti-apoptotic effects. Despite animal studies showing that GRb1 mitigated neuronal apoptosis caused by ischemia and reperfusion [11], its effects on mitochondrial function are still unclear.
SH-SY5Y cells are human neuroblastoma cells, which are similar to neurons in morphological, neurochemical and electrophysiological properties and have been extensively used as an in vitro model to study neuronal injury or death [23]. Oxygen-glucose deprivation (OGD) of SH-SY5Y cells is a well-established and widely used in vitro model for ischemic studies [24]. Thus, the present study aimed to determine whether ginsenoside Rb1 protects against SH-SY5Y apoptosis caused by OGD via maintaining mitochondrial function.

In order to investigate the protective effects of GRb1 on cell death caused by OGD, MTT assay was used to assess cellular viability in SH-SY5Y cells. As shown in Figure 1, cellular viability decreased in SH-SY5Y cells to 68.5% ± 5.2% at 24 h after OGD, but it was reverted to 82.1% ± 5.8% (p < 0.01 versus OGD group) and 87.3% ± 6.3% (p < 0.01 versus OGD group), respectively, by treatment with GRb1 at concentrations of 1.0 µmol/L and 10 µmol/L. However, 100 µmol/L GRb1 did not show any protection on cellular viability when compared with that in the OGD group; we thus think this might because a higher concentration of GRb1 might produce toxic effects on SH-SY5Y cells, which counteract its protective effect. This result indicated that treatment with 1.0 µmol/L and 10.0 µmol/L GRb1 protects the viability of SH-SY5Y cells, but 100 µmol/L GRb1 did not. Thus, the concentration of 1.0 µmol/L and 10.0 µmol/L was used in the subsequent experiments to investigate the protective effects of GRb1 on OGD induced cell death.

It was reported previously that OGD induced apoptosis in SH-SY5Y cells [25], so we evaluated the protective effects of GRb1 on OGD-induced apoptosis in SH-SY5Y cells. TUNEL staining is often used to assess apoptosis by detecting DNA fragmentation, a typical feature of apoptosis. As Figure 2A,B show, the percentage of positive cells to TUNEL staining (green color) was 28.8 ± 7.1% in the OGD group, which was significantly higher than 7.8% ± 1.9% in the control group. However, the elevated percentage reduced to 20.9% ± 3.8% (p < 0.05 versus OGD group) and 12.4% ± 4.1% (p < 0.01 versus OGD group) when the cells were pretreated with GRb1 at the concentrations of 1.0 µmol/L and 10.0 µmol/L, respectively. Further, we used flow cytometry with Annexin V-FITC and PI staining to measure the rate of apoptosis. As shown in Figure 2C, the percentage of SH-SY5Y cells at early stage of apoptosis (Annxin V+/PI−) increased from 5.42% to 17.17%, and the percentage at late stage (Annxin V+/PI+) increased from 3.91% to 12.73% in the OGD group when compared with those in control group. By contrast, pretreatment with 1.0 µmol/L or 10.0 µmol/L GRb1 suppressed the early stage apoptotic rates to 13.61% and 7.43%, respectively. Meanwhile, the percentage of apoptotic cells at late stage was inhibited to 8.46% and 8.01%. Thus, the results form TUNEL staining and flow cytometry indicated that GRb1 inhibited OGD-induced apoptosis in SH-SY5Y cells. 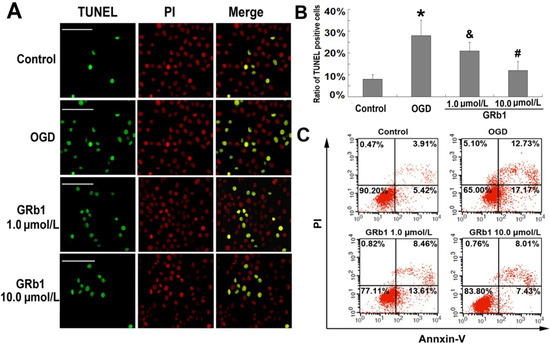 The mitochondrion is thought to be the main site where reactive oxygen species (ROS) are produced, and increased ROS levels within the cell reflect mitochondrial dysfunction [26]. Therefore, we examined the effect of GRb1 on ROS levels. As shown in Figure 3A, fluorescence microscopy revealed that the fluorescence density increased significantly in OGD-treated SH-SY5Y cells when compared with the control group. However, the elevated fluorescence was attenuated effectively by GRb1 either at the concentration of 1.0 µmol/L or 10.0 µmol/L. Consistent with the fluorescence microscopy findings, the results from measurement of the fluorescence density showed that the ROS level in the OGD group was 4.32 ± 0.76 times as high as that in the control group (Figure 3B). By contrast, it reduced markedly to 2.64 ± 0.31 and 1.5 ± 0.22 times when the cells were treated with 1.0 µmol/L or 10.0 µmol/L GRb1, respectively. These results indicated that GRb1 could effectively suppress ROS levels induced by OGD in SH-SY5Y cells. Moreover, the higher concentration of GRb1 showed better inhibitory effects on ROS than the lower concentration did. 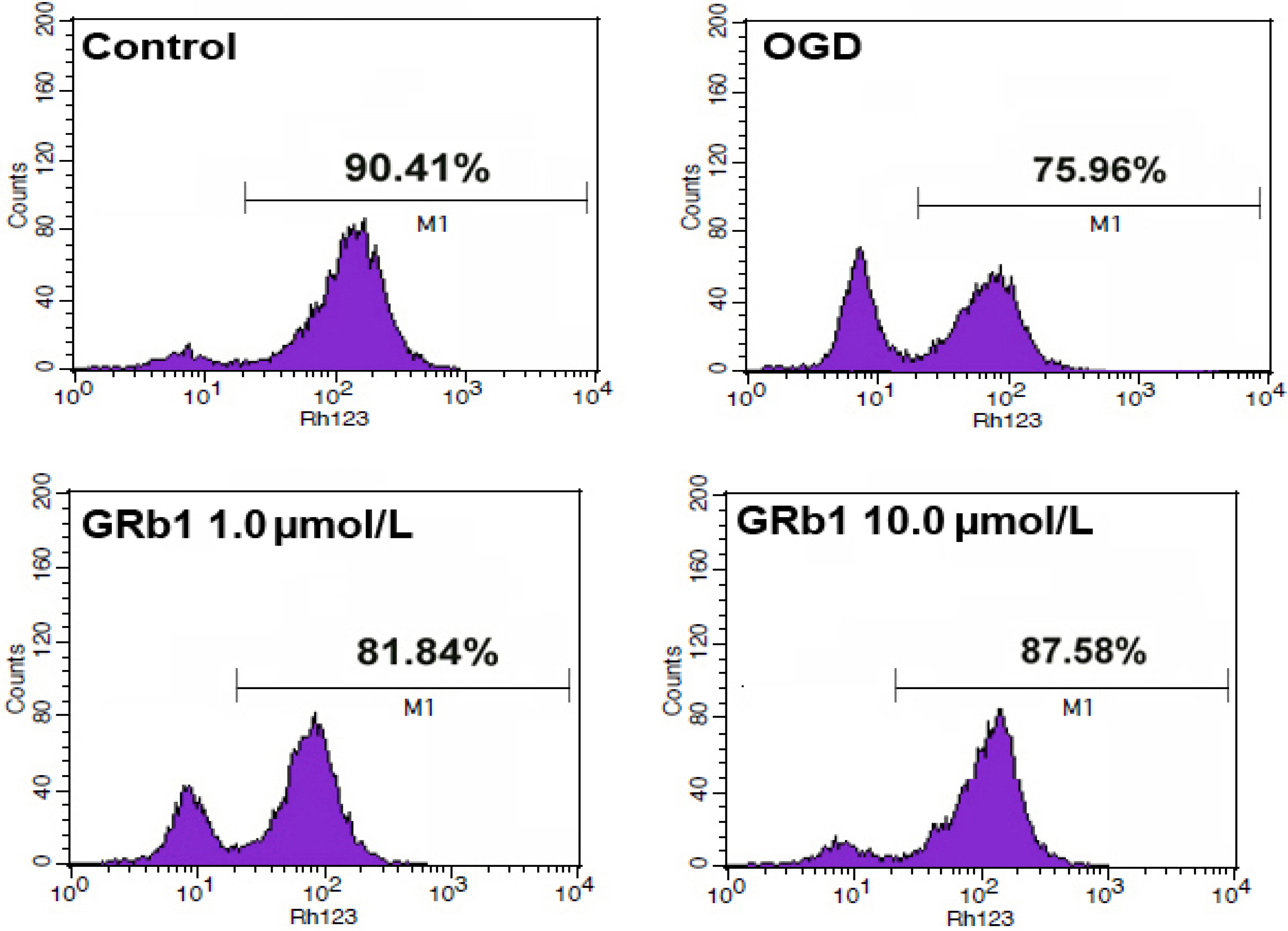 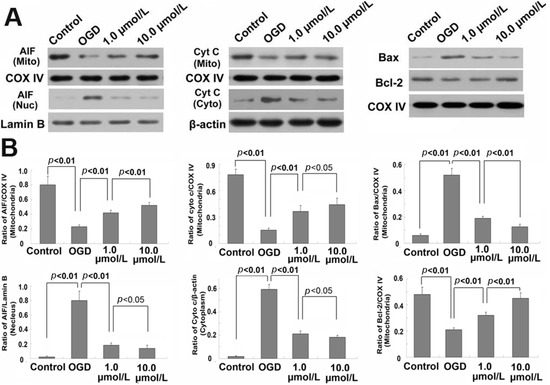 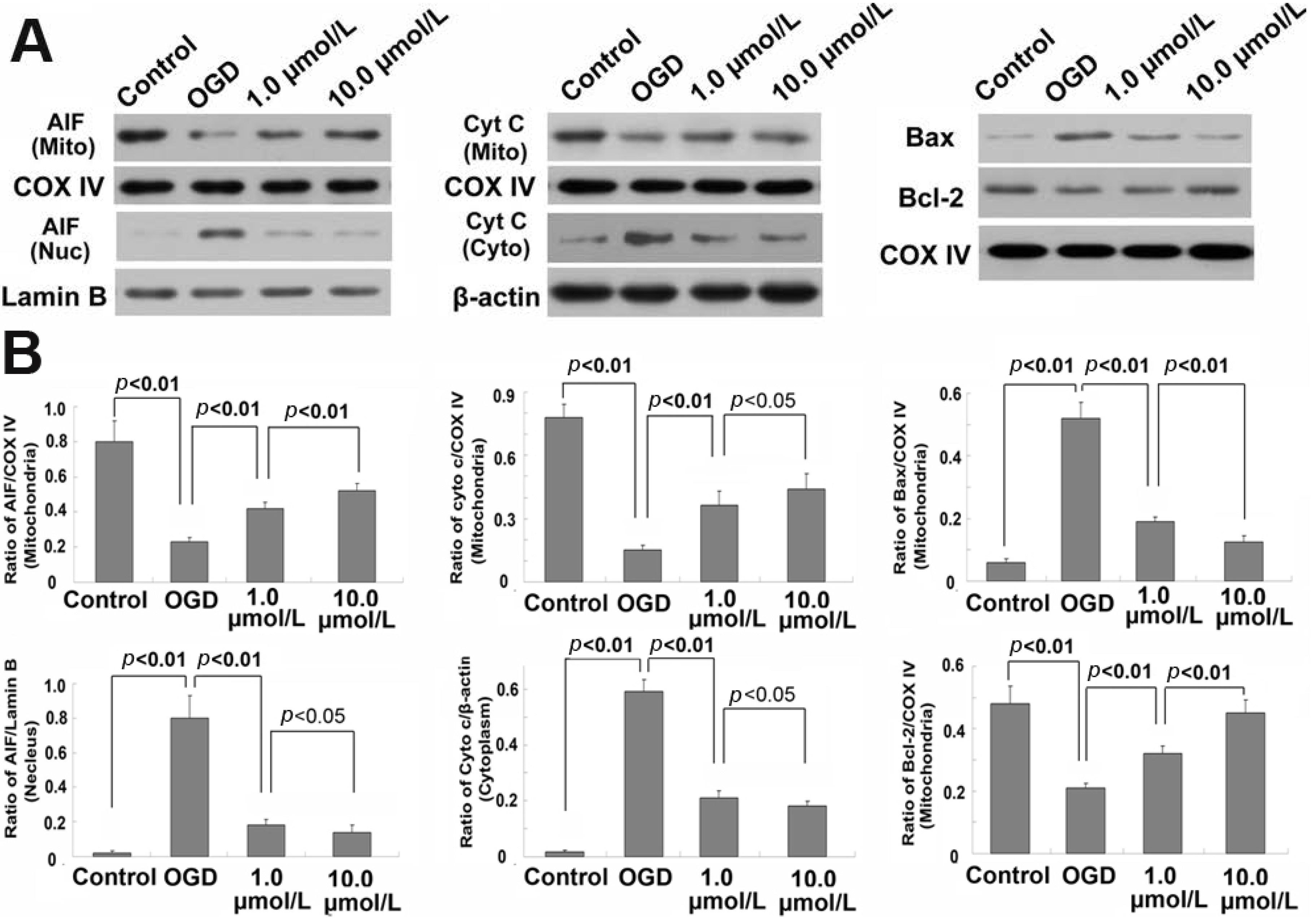 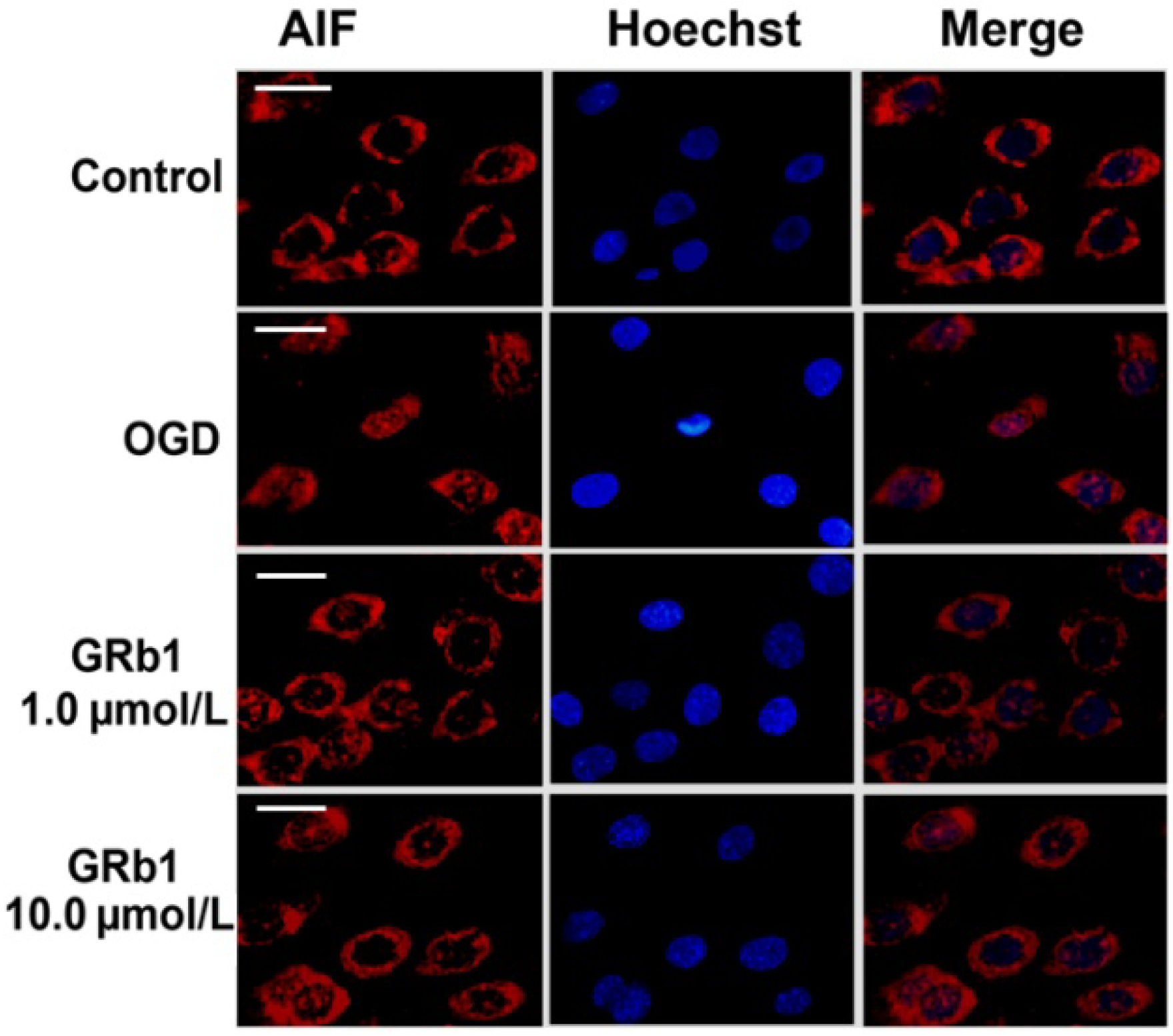 Ginsenoside Rb1 (purity > 98%) was obtained from the National Institute for the Control of Pharmaceutical and Biological Products (Beijing, China). It was dissolved in physiological saline (0.9% NaCl) at the concentration of 10 mmol/L as stock solutions and was diluted with cell culture media before use. Polycolonal primary antibodies against AIF and β-actin were from Abcam (Cambridge, MA, USA), against Bax, Bcl-2 and Lamin B1 were from Cell signaling (Danvers, MA, USA). Monocolonal primary antibodies against cytochrome c (cyt c) and cytochrome c oxidase IV (COX IV) were from Cell signaling (Danvers). Horseradish peroxidase-conjugated goat anti-rabbit IgG and horse anti-mouse IgG were from Cell signaling (Danvers). ECL Western blotting detection reagents from Amersham Company (Piscataway, NJ, USA). PVDF membranes from Millipore Company (Billerica, MA, USA). Other reagents were from Sigma Company (St. Louis, MO, USA).

SH-SY5Y cells were seeded at a density of 4 × 104 cells per well on collagen-coated 96-well plates for 24 h. The cells were then randomized to the following groups: normal control group (normal SH-SYSY cells were cultured under normoxia for 27 h), OGD group (the cells were treated with 3 h OGD followed by 24 h re-oxygenation), OGD + GRb1 group (the cells were treated with GRb1 at 1.0 µmol/L, 10 µmol/L and 100 µmol/L at 30min prior to OGD and continued to at 24 h after re-oxygenation). Cellular viability was assessed using an MTT assay, and the absorbance value (A) at 570 nm was read using an automatic multi-well spectrophotometer (Bio-Rad, Richmond, CA, USA).

Oxygen-glucose deprivation followed by re-oxygenation experiments were carried out at 24 h after seeding the cells. SH-SY5Y cells were placed in an anaerobic chamber (HERA cell 150, partial oxygen pressure was maintained below 2 mmHg) and the medium was replaced with a pre-warmed (37 °C) glucose-free balanced salt solution (116 mmol/L NaCl, 5.4 mmol/L KCl, 0.8 mmol/L MgSO4, 1.0 mmol/L NaH2PO4, 1.8 mmol/L CaCl2, 26.2 mmol/L NaHCO3, 0.025 mmol/L phenol red, and 20 mmol/L sucrose) that had been bubbled with an anaerobic gas mix (95% N2, 5% CO2) for 30 min to remove residual oxygen. SH-SY5Y cells were incubated in this solution at 37 °C for 3 h to produce lethal oxygen-glucose deprivation. OGD was terminated by removing cells from the chamber, replacing the exposure solution with normal DMEM culture, and returning to the incubator under normoxic conditions.

4.5. Assessment of Apoptosis by TUNEL Staining

Apoptosis was further demonstrated by TUNEL staining. In brief, SH-SY5Y cells were washed with PBS and fixed in 4.0% paraformaldehyde for 20 min at room temperature. After washed three times in PBS buffer, the fixed cells were subjected to a TUNEL assay by using an in situ cell death detection kit (Roche, Indianapolis, IN, USA) according to the manufacturer’s specifications. Finally, nucleus counterstaining was performed by incubating cells with propidium iodide at room temperature for 10 min. The cells were mounted on slides after being washed three times with PBS, and visualized under a fluorescent light microscope. Green fluorescence was correlated with DNA fragmentation. The cells with green fluorescence and the cells with red fluorescence were counted to quantify the apoptotic process. Data are expressed as the ratio of TUNEL-positive cells to total cells. Experiments were done in duplicate for three times, and the percentage of TUNEL-positive cells was determined.

4.6. Detection of Apoptosis by Flow Cytometry

The average level of intracellular ROS was evaluated in cells loaded with the redox-sensitive dye DCFH-DA (Molecular Probes, Eugene, OR, USA). All the experimental cells were washed twice with PBS, stained in the dark for 30 min with 20 μmol/L DCFH-DA and harvested. Cells were dissolved with 1% Triton X-100, and fluorescence was observed under fluorescent light microscope, and measured at an excitation wavelength of 485 nm and an emission wavelength 530 nm using a fluorescence spectrometer (HTS 7000, Perkin Elmer, Boston, MA, USA). The ROS levels were expressed as arbitrary unit/mg protein, then as the percentage of control.

The collected SH-SY5Y cells were washed with PBS and fixed in 4.0% paraformaldehyde for 30 min at 4 °C. After washing the cells with PBS three times for 5 min each time, cells were incubated with 1% Triton X-100 for 10 min. The cells were blocked at nonspecific antibody binding sites by incubating with 10% goat serum in PBS containing 0.3% Triton X-100 and 0.5% BSA (bovine serum albumin) for 10 min at room temperature. Cells were then incubated with a mouse monoclonal antibody against AIF (1:200 in PBS) followed by incubation in TRIC-conjugated goat anti-mouse IgG (1:150 in PBS) for 30 min at room temperature. After washing with PBS, cells were incubated with Heochst33342 for 0.5 h. After washing three times, the cells were mounted on slides cells and were visualized under fluorescence microscopy.

All data represent at least four independent experiments and are expressed as mean ± SD. Statistical comparisons were made using one-way ANOVA. p-values of less than 0.05 were considered to represent statistical significance.