Lipases as Tools in the Synthesis of Prodrugs from Racemic 9-(2,3-Dihydroxypropyl)adenine
Previous Article in Journal

Sensorial analysis of pineapple breads (conventionally baked, Cpb; fully baked frozen, Fpb and partially baked, Ppb) showed no significant differences in terms of aroma and taste. On the contrary, the scores for the overall quality between the partially baked and conventionally baked breads showed significant (p < 0.05) differences. At the same time, headspace analysis using a solid-phase microextraction (SPME) method identified 59 volatile compounds. The results of the aroma extracts dilution analysis (AEDA) revealed 19 most odour-active compounds with FD factors in the range of 32–128 as the key odourants of the pineapple breads. Further analysis of the similarities and differences between the pineapple breads in terms of the key odourants were carried out by the application of PLS-DA and PLS-regression coefficients. Results showed that Ppb exhibited strong positive correlations with most of the volatile- and non-volatile compounds, while the Cpb showed significant positive correlations with hexanal and 4-hydroxy-2,5-dimethyl-3(2H)-furanone, and the Fpb had strong positive correlations with lactic acid, benzoic acid, benzaldehyde and ethyl propanoate. View Full-Text
Keywords: pineapple bread; conventionally baked; fully frozen baked; partially baked; volatiles pineapple bread; conventionally baked; fully frozen baked; partially baked; volatiles
►▼ Show Figures 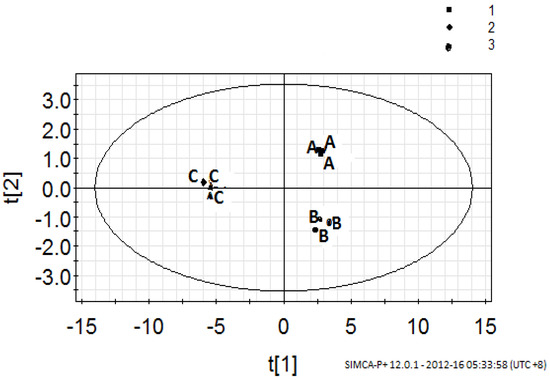