One-Pot and Efficient Synthesis of Triazolo[1,2-a]indazole-triones via Reaction of Arylaldehydes with Urazole and Dimedone Catalyzed by Silica Nanoparticles Prepared from Rice Husk

The objective of the present study was to investigate the in vitro and in vivo hepatoprotective properties of Cichorium endivia L. extract (CEE), and to identify its chemical constituents. CEE significantly blocked the oxidative stress and cytotoxicity induced by tert-butyl hydroperoxide (t-BHP) in HepG2 cells. Meanwhile, oral administration of CEE to mice before the treatment of t-BHP exhibited a markedly protective effect by lowering serum levels of ALT and AST, inhibiting the changes in liver biochemistry including MDA, SOD, GSH and GST, as well as ameliorating the liver injuries according to the histopathological observations. According to the acute oral toxicity test, the LD50 of CEE was greater than 5,000 mg/kg, which demonstrates that the CEE can be considered practically non-toxic. Phytochemical analysis of CEE showed the presence of five compounds identified as 2-furanmethanol-(5'→11)-1,3-cyclopentadiene-[5,4-c]-1H-cinnoline, which is a new cinnoline derivative derived from a natural source but not synthesis, 2-phenylethyl-β-D-glucopyranoside, kaempferol-3-O-β-D-glucoside, kaempferol, and adenosine. In the ORAC assay, CEE and its constituents kaempferol and kaempferol-3-O-β-D-glucoside had considerable antioxidant potency. Taken together, CEE protects hepatic tissue from oxidative damage in vitro and in vivo, potentially due to its phenolic substances, and does not cause acute oral toxicity, which suggests that CEE may be a valid and safe remedy to cure liver disease. View Full-Text
Keywords: Cichorium endivia L.; hepatoprotective activity; oxidaitive damage; 2-furanmethanol-(5'→11)-1,3-cyclopentadiene-[5,4-c]-1H-cinnoline; kaempferol Cichorium endivia L.; hepatoprotective activity; oxidaitive damage; 2-furanmethanol-(5'→11)-1,3-cyclopentadiene-[5,4-c]-1H-cinnoline; kaempferol
►▼ Show Figures 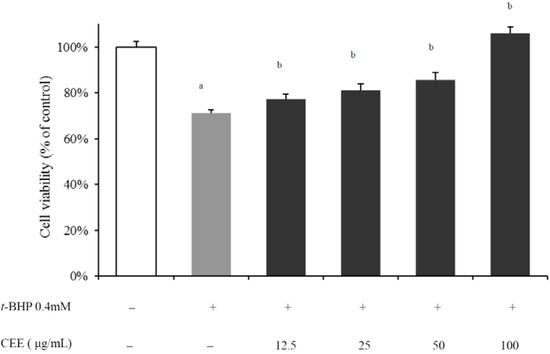