Capsaicinoids are the compounds responsible for the pungency of pepper fruits and their products. Peppers are the fruits of plants from the genus Capsicum and belong to the family Solanaceae. There are several domesticated species of chili peppers, among them Capsicum annuum, C. frutescens and C. chinense, which include many common varieties. These various peppers are widely used in many parts of the world for their valued and characteristic sensory properties: color, pungency and aroma. Pungency, a commercially important attribute of peppers, is due to the presence of chemicals from the characteristic capsaicinoids group [1]. The two most abundant capsaicinoids in peppers are capsaicin (8-methyl-N-vanillyl-trans-6-nonenamide) and dihydrocapsaicin, both constituting about 90%, with capsaicin accounting for ~71% of the total capsaicinoids in most of the pungent varieties [2]. Capsaicin content of peppers is one of the major parameters that determine its commercial quality [3,4,5,6].
Capsaicin is also considered as an active principle which accounts for the pharmaceutical properties of peppers. It has been used as an analgesic against arthritis pain and inflammation [7]. It has also been reported to show anticancer effect [8] and to be active against neurogenic inflammation (burning and stinging of hands, mouth and eyes) [9]. The latter property is the basis for the use of capsaicin in defensive pepper sprays. Capsaicin has also been reported to show protective effects against haigh cholesterol levels and obesity [10]. Capsaicin and other members of the capsaicinoids group produce a large number of physiological and pharmacological effects on the gastrointestinal tract, the cardiovascular and respiratory system as well as the sensory and thermoregulation systems. These effects result principally from the specific action of capsaicinoids on primary afferent neurons of the C-fiber type. This specific influence provides the rationale for their use to treat some peripheral painful states, such as rheumatoid arthritis [11,12,13,14,15,16,17,18]. However, high levels of capsaicin lead to negative health impacts. In a case-control study in Mexico-City which included 220 cases of gastric cancer and 752 controls randomly selected from the general population, chili pepper consumers were at a 5.5-fold greater risk for gastric cancer than non-consumers. Persons who rated themselves as heavy consumers of chili peppers were at an even higher 17-fold greater risk. However, when chili pepper consumption was measured as frequency per day, no significant dose to response relationship was observed [19].
The amount of capsaicin in a given variety can vary depending on the light intensity and temperature at which the plant is grown, the age of the fruit, and the position of the fruit on the plant. The first test developed to measure pungency was the Scoville test, first developed in 1912 by Wilbur Scoville [20]. There are five levels of pungency classified using Scoville heat units (SHU): non-pungent (0–700 SHU), mildly pungent (700–3,000 SHU), moderately pungent (3,000–25,000 SHU), highly pungent (25,000–70,000 SHU) and very highly pungent (>80,000 SHU) [21]. Nowadays, however, the Scoville organoleptic test has been largely replaced by chromatographic methods which are considered to be more reliable and accurate [22]. Capsaicinoids are mainly ingested as naturally occurring pungency-producing components of Capsicum spices (chili, cayenne pepper, red pepper). Their concentrations typically range from 0.1 mg/g in chili pepper to 2.5 mg/g in red pepper and 60 mg/g in oleoresin red pepper [23]. Pepper varieties from Capsicum annuum, C. frutescens and C. chinense were found to contain 0.22–20 mg total capsaicinoids/g of dry weight [24]. In another study, cayenne pepper samples had mean capsaicin and dihydrocapsaicin contents of 1.32 and 0.83 mg/g dry weight, respectively [25]. The mean consumption of Capsicum spices was reported to be 2.5 g/person/day in India, 5 g/person/day in Thailand [26] and 20 g/person (corresponding to one chili pepper) per day in Mexico [19]. Assuming a content of capsaicinoids in these spices of about 1%, the daily intake of capsaicinoids in these countries has been estimated to 25–200 mg/person/day, which corresponds in the case of a person with 50 kg body weight to 0.5–4 mg/kg bw/day [27]. The maximum daily intake of capsaicin in the U.S. and Europe from mild chilies and paprika was estimated to be roughly 0.025 mg/kg bw/day [28], which is equivalent to 1.5 mg/person/day. According to a recent estimation, the mean and maximum intakes of capsaicin from industrially prepared food products containing the recommended general limit of 5 µg/g, would be 0.77 and 2.64 mg/day, respectively [29].
Kingdom of Saudi Arabia (KSA) imports a lot of foodstuffs from several countries. These food products may be grown in different areas and exposed to different environmental conditions: soil composition, irrigation water and light density; so the objective of this work was to estimate the levels of capsaicin and dihydrocapsaicin that may be present in some pepper samples available in local markets in Riyadh city. These concentrations should allow us to calculate the Scoville heat units (SHU), determine the pungency level of each type of pepper analyzed, evaluate the Riyadh population daily intake of capsaicin, then compare the results with other studies carried out around the world to know whether these levels exceed the accepted international range.

Food samples, including hot chili, red chili, green chili, green pepper, red pepper and yellow pepper, were purchased from local markets in Riyadh city (Figure 5). All these pepper types are varieties of Capsicum annuum L. and were imported fron India; the samples are preserved for any further investigation. Capsaicin and dihydrocapsaicin standards were purchased from Fluka Chemical Co. (Buchs, Switzerland). All solvents used as mobile phase were of HPLC grade and supplied by Aldrich (Steinheim, Germany).

All samples were first dried, then extracted using the method of Collins et al. [30] with slight modifications. For capsaicinoid extraction, each dried pepper sample (5 g) was placed in ethanol (5 mL) in a 120 mL glass bottle equipped with a Teflon lined lid. Bottles were capped and placed in a water bath at 80 °C for 4 hours, then swirled manually every hour. Samples were removed from the water bath and cooled to room temperature. The supernatant layer of each sample (5 mL) was filtered through 0.45 µm filter paper into a HPLC sample vial using a 5 mL disposable syringe (Millipore, Bedford, MA, USA). The vial was capped and stored at 5 °C in a refrigerator until analysis.

The HPLC analyses were carried out on a Thermo HPLC system equipped with a Finnigan Surveyor Auto Sampler Plus, a Finnigan Surveyor LC Plus quaternary pump and a Surveyor photodiode array (PDA) detector. The chromatographic conditions were as follows:
The following standard solutions were prepared from a stock solution of capsaicin and dihydrocapsaicin using serial dilutions at 800, 600, 400, 200, 100, 50, 10, 1 and 0.5 µg/g. The standard solutions were run on the high performance liquid chromatograph and the obtained standard curve plots of peak area against concentration are shown on Figure 6 and Figure 7.
During HPLC sample analyses, a standard solution was injected every 10 samples in order to evaluate the retention time reproducibility and instrument calibration.

The major capsaicinoids in peppers, capsaicin and dihydrocapsaicin, were determined by comparison to external reference standards injected under the same conditions. Their identification was based on the retention times measured under identical HPLC conditions while their quantitative determination in the different peppers samples was carried out using the peak areas. The ratio between these capsaicinoids was calculated by dividing capsaicin and dihydrocapsaicin contents to the total capsaicinoids [22]. The capsaicinoid concentrations in samples are expressed as µg/g pepper.

The average capsaicin intake per person per day was estimated from a 24 hrs food questionnaire which was distributed among two hundred and fifty families living in Riyadh city. The answers on the quantities of food they consumed regularly were collected and the mean values were calculated by multiplying the amount of each consumed pepper type by its mean capsaicin concentration; then the average daily intake was calculated as explained in the following example.
Supposing a daily consumption of two types of pepper of 2 and 3 grams, with a corresponding capsaicin concentration estimated to 1,000 µg/g and 500 µg/g, respectively; then the daily intake from each type will be obtained by multiplying the weight of each consumed pepper by its mean capsaicin concentration as follows:
daily intake from type 1 = 1,000 × 2 = 2,000 µg/day = 2 mg/day
daily intake from type 2 = 500 × 3 = 1,500 µg/day = 1.5 mg/day
The average daily intake of capsaicin (expressed in mg/person/day) will thus be:
= (2 + 1.5) = 3.5 mg/person/day
Assuming an average body weight of 70 kg, the daily capsaicin intake expressed in mg/kg body wt/day will be:
= 3.5/70 = 0.05 mg/kg body wt/day

Six Capsicum samples were investigated in order to determine their capsaicinoids composition. After extraction, the HPLC analyses allowed identification and determination of capsaicin and dihydrocapsaicin which were the main capsaicinoids in the different chili and pepper samples. Hot chili obtained from the local markets in Riyadh was the most pungent (67,984.60 SHU) among the peppers studied. The pungency of analyzed samples decreased as follows: hot chili (highly pungent), red chili (moderately pungent), green chili (mildly pungent), green pepper (non pungent), red pepper and yellow pepper (non pungent). The average pepper consumption by the population of Riyadh city and the corresponding daily capsaicin intake were 15.5 g/person/day and 7.584 mg/person/day, respectively.

The Authors extend their appreciation to the Deanship of Scientific Research at King Saud University for funding the work through the research group project No RGP-VPP-043. 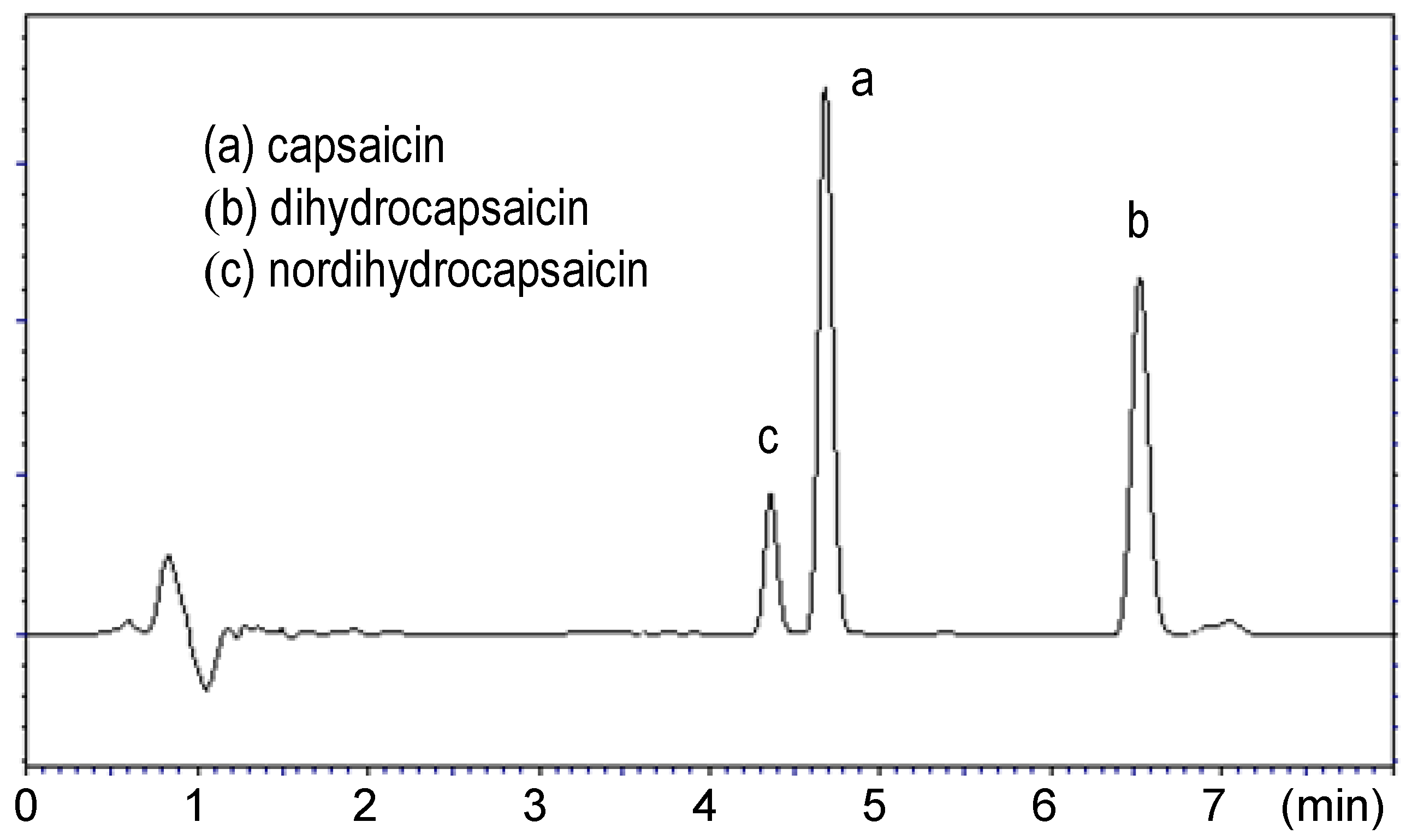 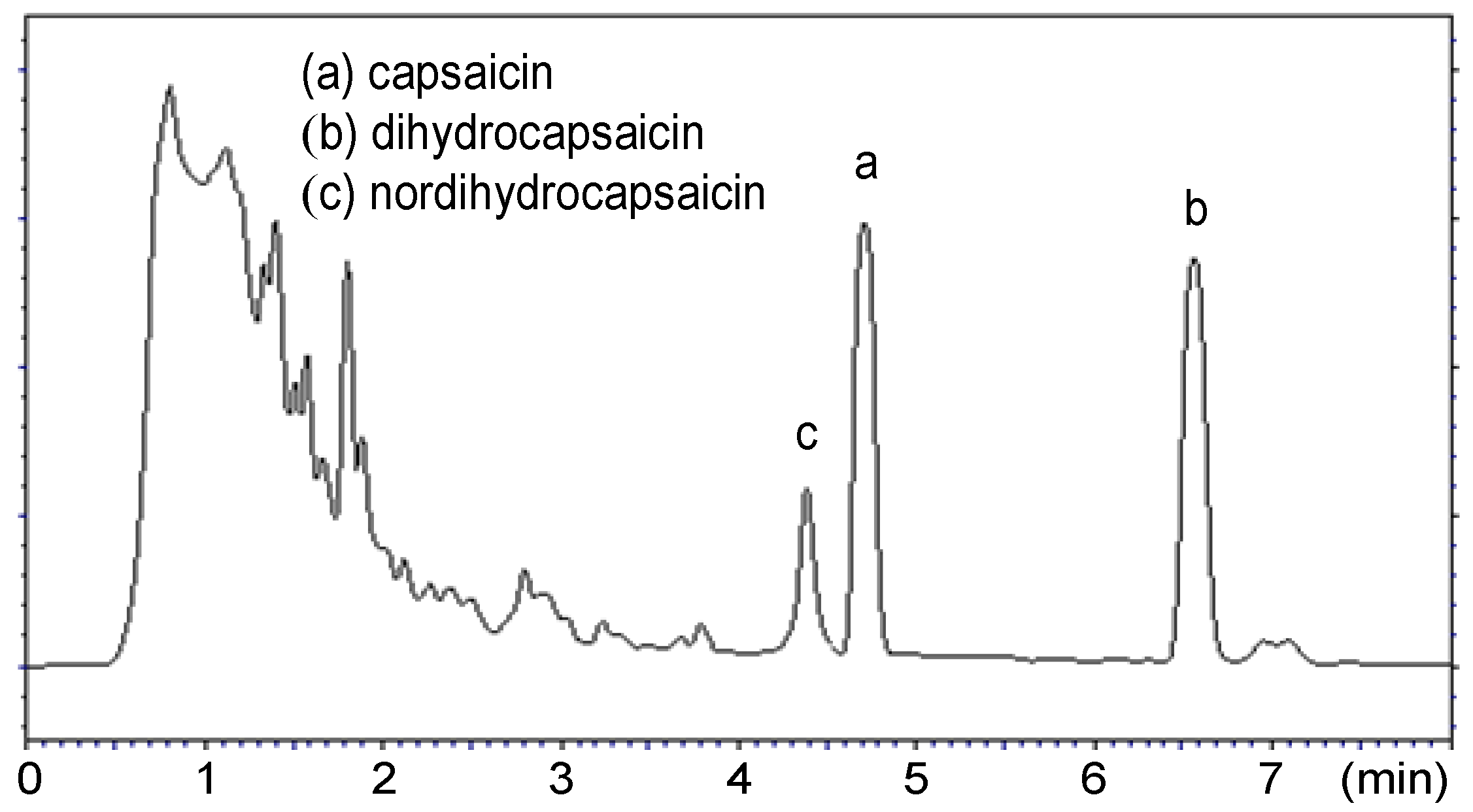