Assessment of Euphorbia hirta L. Leaf, Flower, Stem and Root Extracts for Their Antibacterial and Antifungal Activity and Brine Shrimp Lethality
Next Article in Special Issue

Free radical-induced oxidative damage is involved in the pathogenesis of many chronic and degenerative diseases, such as cardiovascular disease, cancer, diabetes, neurodegenerative disease and ageing [1,2,3,4,5]. Reactive oxygen species (ROS), including superoxide free radical, hydrogen peroxide, hydroxyl free radical and singlet oxygen, play a key role in the oxidative damage of these diseases, which may result in DNA mutations, protein inactivation, lipid peroxidation, cell apoptosis or abnormal proliferation, eliciting the occurence of diseases from the cellular and molecular levels [6,7]. Antioxidants are substances capable of scavenging ROS and protecting from oxidative damage. Natural antioxidants, such as vitamins and polyphenols, have high antioxidant capacities and are abundant in many fruits and vegetables, whose consumption has been demonstrated to be inversely associated with the cardiovascular disease and some cancers [8].
The search for raw materials containing potent antioxidants continues to attract the attention of researchers. Fruit, vegetables, legume seeds and spices are all known to be rich sources of natural antioxidants, and medicinal plants are another important source for a wide variety of natural antioxidants. Recently there has been an increasing interest in natural antioxidants in Chinese medicinal plants (CMPs), and the health benefits of CMPs are thought to arise partly from the potential effects of their antioxidants on the reactive oxygen species produced in the human body. Evaluation of antioxidant activity of CMPs is very important because some plants possessing high antioxidant capacities, which are potentially valuable sources of natural antioxidants, could be screened out. In the literature, the antioxidant activities of many CMPs have been evaluated [9], and special attention has been paid to several types of CMPs, such as those possessing nutritious and tonic functions [10,11], anticancer activities [12], antiviral activities [13], heat-clearing properties [14], and blood circulation regulating actions [15,16]. Furthermore, several studies indicated that some CMPs possessed more potent antioxidant activities than common fruits and vegetables [12,17].
Chinese medicinal plants have been used for pharmaceutical and dietary therapy for thousands of years. In particular, there is a category of CMPs used to treat rheumatic disease, which is a series of connective tissue disorders, especially of the muscles and/or joints, pathologically characterized by inflammation, such as osteoarthritis, rheumatoid arthritis, systemic lupus erythematosus and ankylosing spondylitis. These medicinal plants have high anti-inflammatory abilities and can fight against the inflammation caused by rheumatic diseases. In addition, inflammation can be partly attributed to oxidative stress caused by ROS [18]. Furthermore, the anti-inflammatory activities of the medicinal plants could be from, at least in part, their antioxidant properties [19]. This prompted us to speculate that these medicinal plants, whose antioxidant activities were not yet evaluated systematically, could contain rich natural antioxidants. Thus, it is imperative to carry out a large-scale systematic screening of these CMPs to discover the plants with high antioxidant activities.
The purpose of this study was to systematically evaluate the antioxidant capacities and total phenolic contents of 50 Chinese medicinal plants associated with the treatment of rheumatic diseases in order to find new potential sources of natural antioxidants, and to investigate the relationship between total phenolic contents and antioxidant capacities. The results from this study will be in useful to understand the antioxidant capacity profiles of these medicinal plants, and also helpful for investigation of antirheumatic drugs.

The dry plant samples were ground to a fine powder with a special grinder for herbal medicine. A precisely weighed amount (0.5 g) of the powder was extracted with 10 ml of 80% methanol at 35 °C for 24 h in a shaking bath according to the literature [12]. All samples were then cooled down to the room temperature and centrifuged at 4,000 rpm for 10 min. The supernatant was recovered for the evaluation of antioxidant capacity and total phenolic content.

The FRAP assay was carried out according to the literature [20]. Briefly, the FRAP reagent was prepared from sodium acetate buffer (300 mM, pH 3.6), 10 mM TPTZ solution (40 mM HCl as solvent) and 20 mM iron (III) chloride solution in a volume ratio of 10:1:1, respectively. The FRAP reagent was prepared fresh daily and warmed to 37 °C in a water bath before use. One hundred microliters of the diluted sample was added to 3 mL of the FRAP reagent. The absorbance of the reaction mixture was then detected at 593 nm after 4 min in room temperature. The standard curve was constructed using FeSO4 solution, and the results were expressed as µmol Fe(II)/g dry weight of plant material.

The TEAC assay was carried out to determine the free radical scavenging capacity using the ABTS•+ radical cation, according to the literature [29]. Briefly, the ABTS•+ stock solution was prepared from 7 mM ABTS•+ and 2.45 mM potassium persulfate in a volume ratio of 1:1, and then should be incubated in the dark for 16 h at room temperature and used within 2 days. The ABTS•+ working solution was prepared by dilution of the stock solution with ethanol to an absorbance of 0.70 ± 0.05 at 734 nm. All samples were diluted approximately to provide 20–80% inhibition of the blank absorbance. One hundred microliters of the diluted sample was mixed with 3.8 mL ABTS•+ working solution. The absorbance of the reaction mixture was then detected at 734 nm after 6 min of incubation at room temperature, and the percent of inhibition of absorbance at 734 nm was calculated. Trolox solution was used as a reference standard, and the results were expressed as µmol Trolox/g dry weight of plant material.

The total phenolic contents were determined using Folin–Ciocalteu method according to the literature [23]. Briefly, diluted sample (0.50 mL) was added to 1:10 diluted Folin–Ciocalteu reagent (2.5 mL). After 4 min, saturated sodium carbonate solution (about 75 g/L, 2 mL) was added. After 2 h of incubation at room temperature, the absorbance of the reaction mixture was measured at 760 nm. Gallic acid was used as a reference standard, and the results were expressed as milligram gallic acid equivalent (mg GAE)/g dry weight of plant material.

All the experiments were performed in triplicate, and the results were expressed as mean ± SD (standard deviation). The correlation between the antioxidant capacities and total phenolic contents was analyzed using the simple linear regression, and coefficient of determination (R2) was calculated. Statistical analysis was performed using SPSS 13.0 and MS Excel 2003. The significant difference was considered at p value ≤ 0.05.

This research was supported by the Hundred-Talents Scheme of Sun Yat-sen University. The useful suggestion and technical assistance from Qin Xiao, Meng-Jun Hou and Tie-Jiang Chen is highly appreciated. 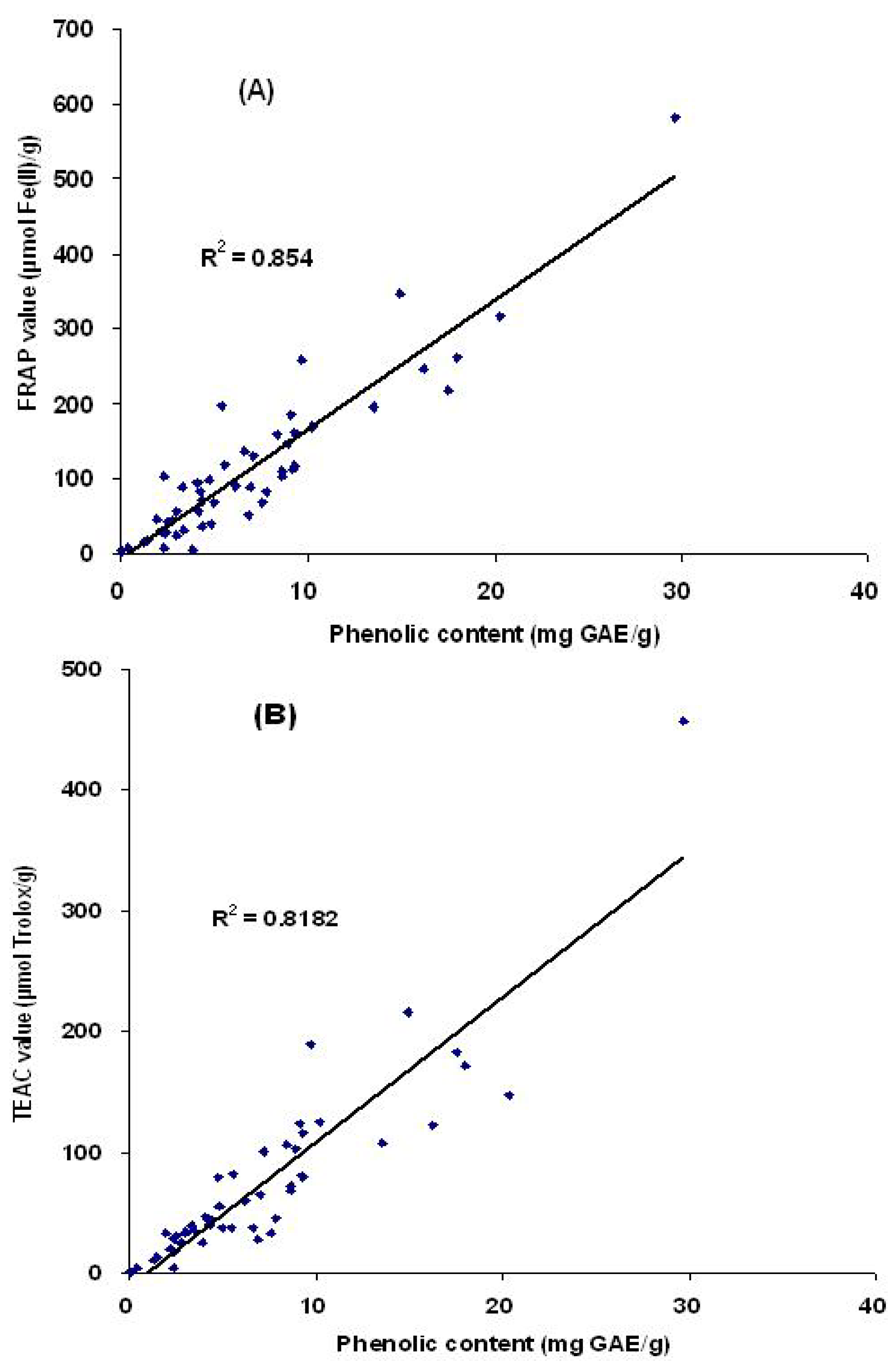