Molecular Modeling Studies on 11H-Dibenz[b,e]azepine and Dibenz[b,f][1,4]oxazepine Derivatives as Potent Agonists of the Human TRPA1 Receptor

A computational strategy based on comparative molecular fields analysis (CoMFA) and comparative molecular similarity indices analysis (CoMSIA) was performed on a series of the 11H-dibenz[b,e]azepine and dibenz[b,f][1,4]oxazepine derivatives as potent agonists of the human TRPA1 receptor. The CoMFA and CoMSIA models resulting from a 21 molecule training set gave r2cv values of 0.631 and 0.542 and r2 values of 0.986 and 0.981, respectively. The statistically significant models were validated by a test set of five compounds with predictive r2pred. values of 0.967 and 0.981 for CoMFA and CoMSIA, respectively. A systemic external validation was also performed on the established models. The information obtained from 3D counter maps could facilitate the design of more potent human TRPA1 receptor agonists. View Full-Text
Keywords: 11H-dibenz[b,e]azepines; dibenz[b,f][1,4]oxazepines; CoMFA; CoMSIA; TRPA1 11H-dibenz[b,e]azepines; dibenz[b,f][1,4]oxazepines; CoMFA; CoMSIA; TRPA1
►▼ Show Figures 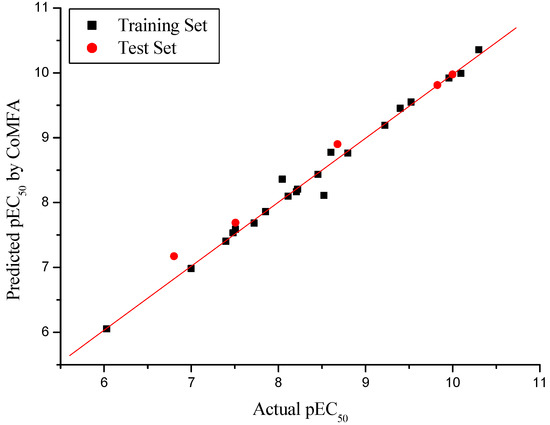