Ionic Liquids: Just Molten Salts After All?
Next Article in Special Issue

Diaroyl Tellurides: Synthesis, Structure and NBO Analysis of (2-MeOC6H4CO)2Te – Comparison with Its Sulfur and Selenium Isologues. The First Observation of [MgBr][R(C=Te)O] Salts

A series of aromatic diacyl tellurides were prepared in moderate to good yields by the reactions of sodium orpotassium arenecarbotelluroates with acyl chlorides in acetonitrile. X-ray structure analyses and theoretical calculations of 2-methoxybenzoic anhydride and bis(2-methoxybenzoyl) sulfide, selenide and telluride were carried out. The two 2-MeOC6H4CO moieties of bis(2-methoxybenzoyl) telluride are nearly planar and the two methoxy oxygen atoms intramolecularly coordinate to the central tellurium atom from both side of C(11)-Te(11)-C(22) plane. In contrast, the oxygen and sulfur isologues (2-MeOC6H4CO)2E (E = O, S), show that one of the two methoxy oxygen atoms contacts with the oxygen atom of the carbonyl group connected to the same benzene ring. The structure of di(2-methoxybenzoyl) selenide which was obtained by MO calculation resembles that of tellurium isologues rather than the corresponding oxygen and sulfur isologues. The reactions of di(aroyl) tellurides with Grignard reagents lead to the formation of tellurocarboxylato magnesium complexes [MgBr][R(C=Te)O]. View Full-Text
Keywords: diacyl telluride; diacyl selenide; diacyl sulfides; Grignard reagent; magnesium carbotelluroate diacyl telluride; diacyl selenide; diacyl sulfides; Grignard reagent; magnesium carbotelluroate
►▼ Show Figures 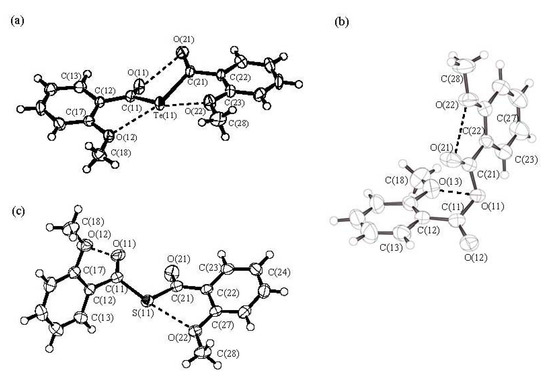