Centipeda minima is a medicinal plant reputed in China as a remedy for nasopharyngeal carcinoma (NPC). In this study, bioactivity-guided fractionation of the anti-NPC compound(s) from C. minima led to the isolation of 2β-(isobutyryloxy)florilenalin (IF), a sesquiterpene lactone. IF showed significant dose- and time- dependent inhibition on the growth of the human nasopharyngeal carcinoma epithelia cells (CNE). It induced apoptosis in CNE cells, as shown by the accumulation of sub-G1 cell population, DNA fragmentation and nuclear condensation, caspase-3 activation and PARP cleavage. Such induction was associated with the depletion of mitochondrial membrane potential (ΔΨm) and the release of cytochrome c to cytosol to regulate the expression of Bcl-2 family proteins. These activities led to the cleavage of caspases and the trigger of cell death process. Overall, IF in C. minima showed potent antiproliferative effect of C. minima on NPC cells, suggesting that the plant deserves more extensive investigation for its potential medicinal application. View Full-Text
Keywords: 2-β(isobutyryloxy)florilenalin; centipeda minima; sesquiterpene lactone; apoptosis; nasopharyngeal carcinoma 2-β(isobutyryloxy)florilenalin; centipeda minima; sesquiterpene lactone; apoptosis; nasopharyngeal carcinoma
►▼ Show Figures 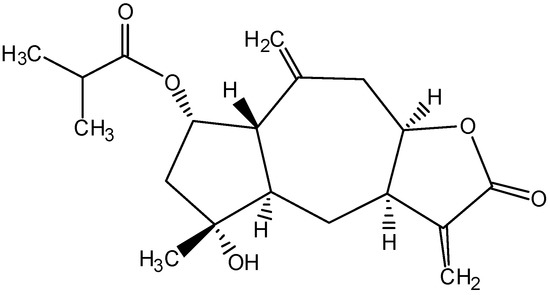