An Overview of Variational Autoencoders for Source Separation, Finance, and Bio-Signal Applications

The Sound of Silence: Minorities, Abstention and Democracy

:
Despite the existence of an extensive literature, no definitive conclusion seems to emerge on the extent to which minorities are guaranteed by democratic rules in political systems. This paper contributes to this debate by proposing a modified Heigselmann and Krauss two-dimensional model of preferences in order to capture the role of abstention on minority representativeness. Regardless of the typology of abstention, simulation results show that voter abstention always benefits minorities.
Keywords:
democracy; opinion dynamics; turnout; majority; regime

We model a set of N voters as points distributed within a two-dimensional preference space , where each voter is defined by her preference profile vector , with and continuous coordinates. Such a setup is characteristic of the version of the Hegselmann and Krause () model, that we decided to adopt as starting point for our model since its behavior is richer than that of the original counterpart [30]. In the political context we are considering here, the two coordinates could represent, for example, the voter’s opinions about, respectively, targets and tools of a certain policy on which the assembly must make a decision.
The simulation process consists of an opportune modification of the original Hegselmann and Krause dynamics, specifically designed for virtually reproducing the democratic procedure which drives an assembly of voters towards a final political decision. This process will be implemented through the following subsequent phases:

At the end of the simulation run, i.e., once reached the final decision at , we need to quantify the distortion of preferences for both majority and minority, in order to compare them and evaluate minority representativeness. To achieve this goal, we introduce what we call the “Global Preference Shift” (gps), defined as follows:
In general, we would expect that will be smaller than , since the weight of the majority coalition in “attracting” the position of the final decision in the preference space is bigger by definition due to its greater size (). However, the exact extent of the difference between these preference shifts does emerge in a complex and unpredictable way from the whole dynamical process, making the results slightly different for different simulation runs and strictly depending not only on the random realization of the initial conditions, but also on the values of the main control parameters (fragmentation level, type and degree of abstention). Therefore, the question about the possible existence of a tyranny of majority for a political system, with a given fragmentation level and in presence of a certain degree of strategic or non strategic abstention, remains open and needs a more extensive simulation campaign to be answered to.

In this paper, we presented a modified version of the Hegselmann and Krause model in two dimensions, in which the debate and all subsequent phases of political agreement have been implemented in order to study consequences of abstention on democratic voting systems. Additionally, we also introduced political fragmentation to better capture the framework in which voting process occurs. The main focus is about the role of both strategic and non-strategic abstention on minority representativeness. Specifically, we believe that, within the limits of the explored parameter space, our results could help to shed light on the existing debate on the potential risk of tyranny of majority. In fact, regardless of the typology of abstention, we found that minorities always benefit from voters’ abstention, while majorities only gain from the non-strategic abstention, independently of the political system fragmentation. These results encourage us to believe that the proposed model, specifically designed to explore the dynamical process driving towards a final decision in a two coalitions political system, could surely be considered for further investigations in this context, possibly extending the parameter space. 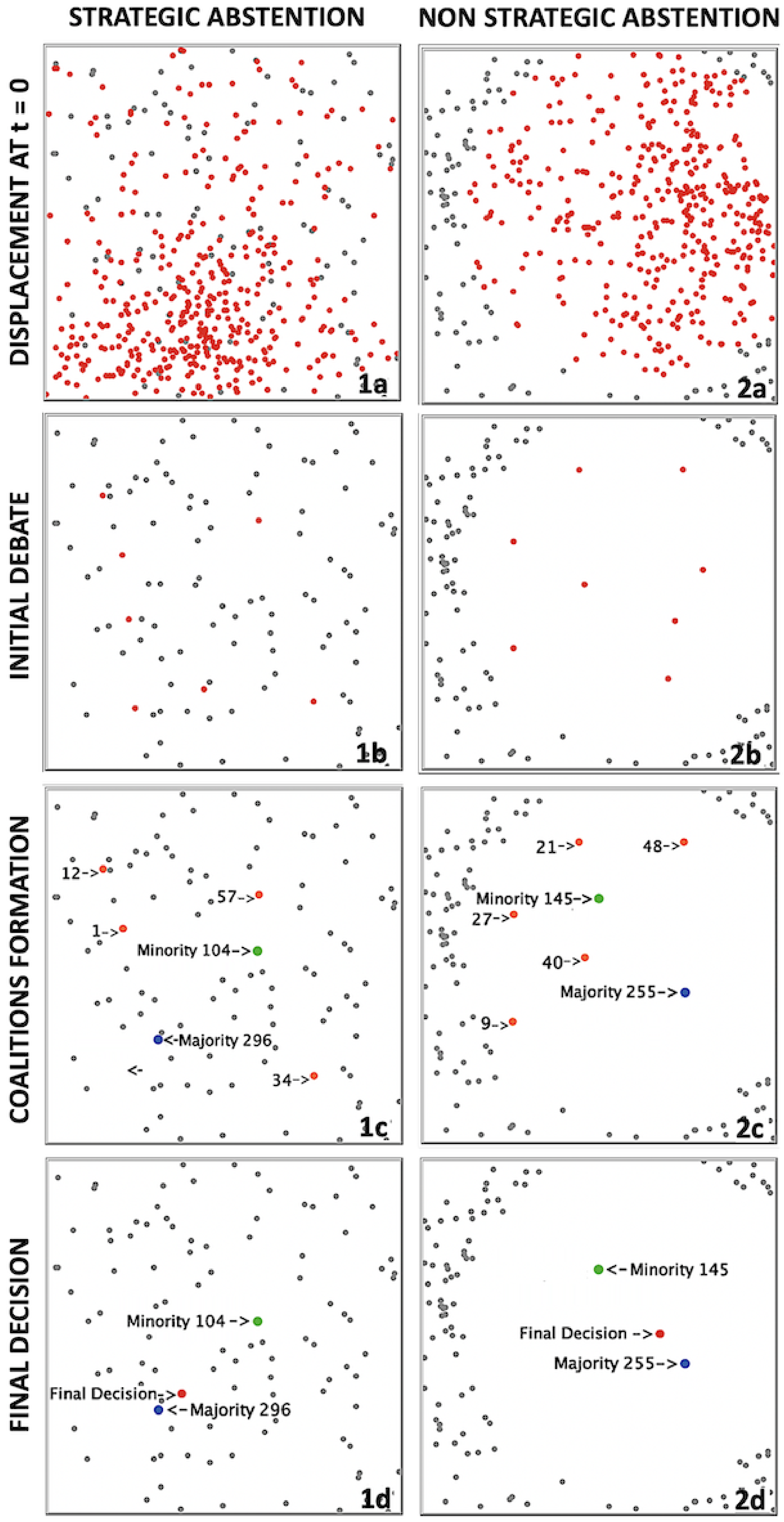