Natural Time Analysis of Seismicity within the Mexican Flat Slab before the M7.1 Earthquake on 19 September 2017
Previous Article in Journal

Background: This investigation included both a study of potential non-invasive diagnostic approaches for the bladder cancer biomarker UBC® Rapid Test and a study including comparative methods about sensitivity–specificity characteristic (SS-ROC) and predictive receiver operating characteristic (PV-ROC) curves that used bladder cancer as a useful example. Methods: The study included 289 urine samples from patients with tumors of the urinary bladder, patients with non-evidence of disease (NED) and healthy controls. The UBC® Rapid Test is a qualitative point of care assay. Using a photometric reader, quantitative data can also be obtained. Data for pairs of sensitivity/specificity as well as positive/negative predictive values were created by variation of threshold values for the whole patient cohort, as well as for the tumor-free control group. Based on these data, sensitivity–specificity and predictive value threshold distribution curves were constructed and transformed into SS-ROC and PV-ROC curves, which were included in a single SS/PV-ROC plot. Results: The curves revealed TPP-asymmetric improper curves which cross the diagonal from above. Evaluation of the PV-ROC curve showed that two or more distinct positive predictive values (PPV) can correspond to the same value of a negative predictive value (NPV) and vice versa, indicating a complexity in PV-ROC curves which did not exist in SS-ROC curves. In contrast to the SS-ROC curve, the PV-ROC curve had neither an area under the curve (AUC) nor a range from 0% to 100%. Sensitivity of the qualitative assay was 58.5% and specificity 88.2%, PPV was 75.6% and NPV 77.3%, at a threshold value of approximately 12.5 µg/L. Conclusions: The SS/PV-ROC plot is a new diagnostic approach which can be used for direct judgement of gain and loss of predictive values, sensitivity and specificity according to varied threshold value changes, enabling characterization, comparison and evaluation of qualitative and quantitative bioassays. View Full-Text
Keywords: predictive ROC curve; ROC curve; PV-ROC curve; SS-ROC curve; SS/PV-ROC plot; empirical; urinary bladder cancer predictive ROC curve; ROC curve; PV-ROC curve; SS-ROC curve; SS/PV-ROC plot; empirical; urinary bladder cancer
►▼ Show Figures 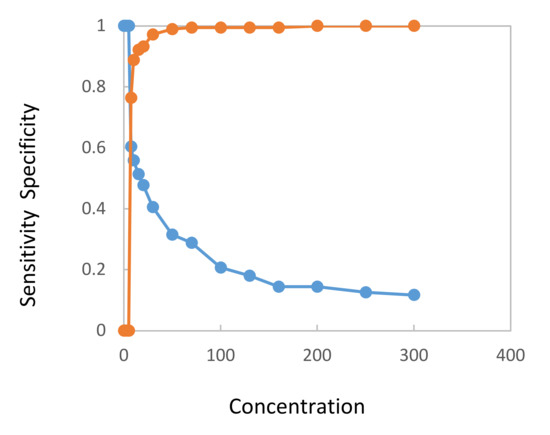