Chaos Control and Synchronization of a Complex Rikitake Dynamo Model

In 1958, Rikitake discovered the 3-D Rikitake dynamo system [31] whose equations are where are state variables, are parameters. As mentioned in [32], the Rikitake system (1) behaves chaotically for and with , which are shown in Figure 1.
A new system can be generated by assuming that x and y are complex states and changing cross coupled terms x and y to complex conjugate form. Thus, we call it complex Rikitake system, which can be described as where , , , , and denote the complex conjugates of x and y. Replacing in system (2) with real and imaginary variables can lead to the following equivalent system
In the next subsection, we study some dynamical properties of this new system (3).

Given a coordinate transformation T as follows
It is clear that each trajectory is symmetrical with respect to the -axis. That means system (3) is invariant for the given transformation T.

The divergence of system (3) can be calculated as
As a result, it follows from the condition that system (3) is dissipative.

In order to find the equilibria of system (3), we consider equations in the form
After computation, we obtain the following equilibrium points: where and . Now, we consider the stability of S. The Jacobian of system (3) at point S is deduced as:
Furthermore, one can get the characteristic polynomial of ,
According to Routh–Hurwitz criterion, it is unstable for any given and .

Assuming that , and , the methods numerical analysis are used to obtain chaotic attractor, Poincaré map and bifurcation diagrams, see Figure 2, Figure 3 and Figure 4. Figure 2 shows chaotic attractors of the complex Rikitake system in different planes. The Poincaré diagrams of system (3) are depicted in Figure 3. As described in Figure 4a, basic bifurcation versus parameter with . Figure 4b demonstrates system (3) is sensitivity to initial value. Furthermore, we apply numerical computation to obtain the corresponding Lyapunov exponents of system (3),
Thus, using the formula of fractal dimension [33], we easily deduce that
This implies that the Lyapunov dimension of system (3) is fractional. Consequently, it is noticeable that system (3) behaves chaotically for this choice of and .

This section proves the existence of synchronization of the complex Rikitake system, and then realizes CS and the coexistence of CS and AS by feedback control method.
Let us consider two identical complex Rikitake systems with different initial conditions. The drive system is described by where , , , , , and
In the same way, the response system with controllers can be expressed as where , , , is the error feedback controller to be designed, , and
The synchronization error is denoted as where and are real constants ().
Following the results in [12], we introduce the relevant definition.
Definition 1.
For the drive system (10) and the response system (11),

4.1. The Existence of Synchronization in the Complex Rikitake System

Taking the derivative of and using Equations (10) and (11), one obtains which is equivalent to the following equations and
It is clear that implies and . In order to implement a suitable controller, should be a fixed point of the error system without controllers (i.e., ) and should be a fixed point of the error system in absence of controllers (i.e., )
Thus, one has
Furthermore, the following equality holds
Thus, we obtain the conclusion about the existence of the synchronization problem.
Theorem 3.
The existence of synchronization in complex chaotic system (10) iff has solutions for δ.
Proof.
The proof is easily obtained by Theorem 1 in [12], so it is omitted here. □
Using the result of Theorem 3, one gets that the existence of synchronization in the complex Rikitake system (10) is converted to the following equations having solutions for , which leads to
Furthermore, we have the following results:

4.2. CS of the Complex Rikitake System

4.3. The Coexistence of CS and AS in the Complex Rikitake System

The authors declare that the study was realized in collaboration with the same responsibility. All authors have read and agreed to the published version of the manuscript.

The authors sincerely thank the reviewers for their valuable suggestions and useful comments that have led to the present improved version of the original manuscript. 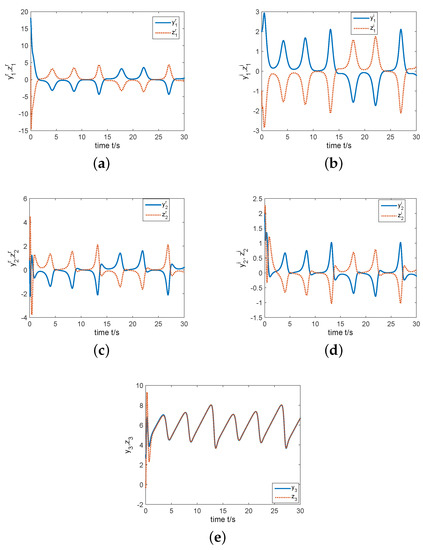