Allostery and Epistasis: Emergent Properties of Anisotropic Networks
Next Article in Special Issue

Evolution of Cooperation in the Presence of Higher-Order Interactions: from Networks to Hypergraphs
Previous Article in Journal

Cooperation on Interdependent Networks by Means of Migration and Stochastic Imitation

Power-law distributed cascade failures are well known in power-grid systems. Understanding this phenomena has been done by various DC threshold models, self-tuned at their critical point. Here, we attempt to describe it using an AC threshold model, with a second-order Kuramoto type equation of motion of the power-flow. We have focused on the exploration of network heterogeneity effects, starting from homogeneous two-dimensional (2D) square lattices to the US power-grid, possessing identical nodes and links, to a realistic electric power-grid obtained from the Hungarian electrical database. The last one exhibits node dependent parameters, topologically marginally on the verge of robust networks. We show that too weak quenched heterogeneity, coming solely from the probabilistic self-frequencies of nodes (2D square lattice), is not sufficient for finding power-law distributed cascades. On the other hand, too strong heterogeneity destroys the synchronization of the system. We found agreement with the empirically observed power-law failure size distributions on the US grid, as well as on the Hungarian networks near the synchronization transition point. We have also investigated the consequence of replacing the usual Gaussian self-frequencies to exponential distributed ones, describing renewable energy sources. We found a drop in the steady state synchronization averages, but the cascade size distribution, both for the US and Hungarian systems, remained insensitive and have kept the universal tails, being characterized by the exponent . We have also investigated the effect of an instantaneous feedback mechanism in case of the Hungarian power-grid. View Full-Text
Keywords: power-grid; Kuramoto; dynamic simulation; failure cascade power-grid; Kuramoto; dynamic simulation; failure cascade
►▼ Show Figures 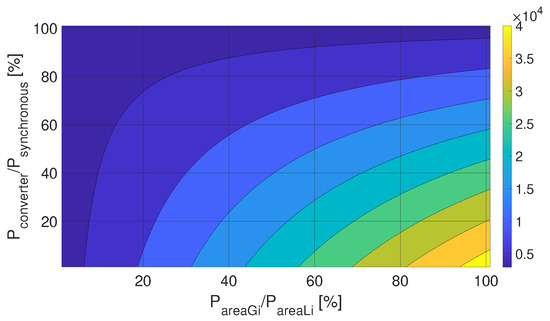