Clocks without “Time” in Entangled-State Experiments
Previous Article in Journal

A system that combines a vapor compression refrigeration system (VCRS) with a vapor absorption refrigeration system (VARS) merges the advantages of both processes, resulting in a more cost-effective system. In such a cascade system, the electrical power for VCRS and the heat energy for VARS can be significantly reduced, resulting in a coefficient of performance (COP) value higher than the value of each system operating in standalone mode. A previously developed optimization model of a series flow double-effect H2O-LiBr VARS is extended to a superstructure-based optimization model to embed several possible configurations. This model is coupled to an R134a VCRS model. The problem consists in finding the optimal configuration of the cascade system and the sizes and operating conditions of all system components that minimize the total heat transfer area of the system, while satisfying given design specifications (evaporator temperature and refrigeration capacity of −17.0 °C and 50.0 kW, respectively), and using steam at 130 °C, by applying mathematical programming methods. The obtained configuration is different from those reported for combinations of double-effect H2O-LiBr VAR and VCR systems. The obtained optimal configuration is compared to the available data. The obtained total heat transfer area is around 7.3% smaller than that of the reference case. View Full-Text
Keywords: combined refrigeration process; absorption-compression; cascade; R134a (1,1,1,2-tetrafluoroetano); water-lithium bromide; double-effect; superstructure; optimization combined refrigeration process; absorption-compression; cascade; R134a (1,1,1,2-tetrafluoroetano); water-lithium bromide; double-effect; superstructure; optimization
►▼ Show Figures 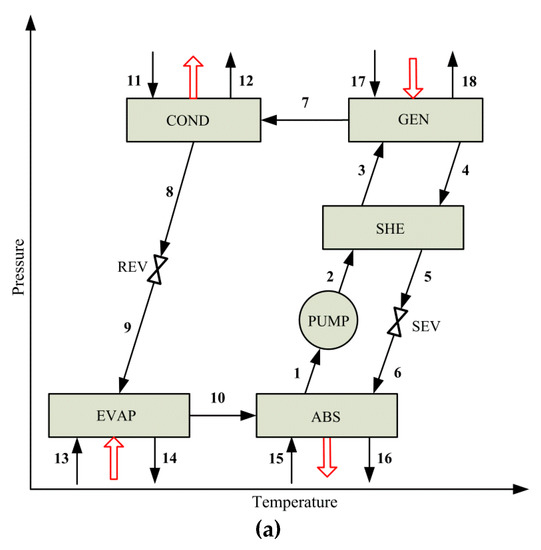