Entropic Effects in Polymer Nanocomposites
Next Article in Special Issue

Bell Inequalities with One Bit of Communication

The device-independent approach to physics is one where conclusions about physical systems (and hence of Nature) are drawn directly and solely from the observed correlations between measurement outcomes. This operational approach to physics arose as a byproduct of Bell’s seminal work to distinguish, via a Bell test, quantum correlations from the set of correlations allowed by local-hidden-variable theories. In practice, since one can only perform a finite number of experimental trials, deciding whether an empirical observation is compatible with some class of physical theories will have to be carried out via the task of hypothesis testing. In this paper, we show that the prediction-based-ratio method—initially developed for performing a hypothesis test of local-hidden-variable theories—can equally well be applied to test many other classes of physical theories, such as those constrained only by the nonsignaling principle, and those that are constrained to produce any of the outer approximation to the quantum set of correlations due to Navascués-Pironio-Acín. We numerically simulate Bell tests using hypothetical nonlocal sources of correlations to illustrate the applicability of the method in both the independent and identically distributed (i.i.d.) scenario and the non-i.i.d. scenario. As a further application, we demonstrate how this method allows us to unveil an apparent violation of the nonsignaling conditions in certain experimental data collected in a Bell test. This, in turn, highlights the importance of the randomization of measurement settings, as well as a consistency check of the nonsignaling conditions in a Bell test. View Full-Text
Keywords: quantum nonlocality; Bell test; device-independent; p-value; hypothesis testing; nonsignaling quantum nonlocality; Bell test; device-independent; p-value; hypothesis testing; nonsignaling
►▼ Show Figures 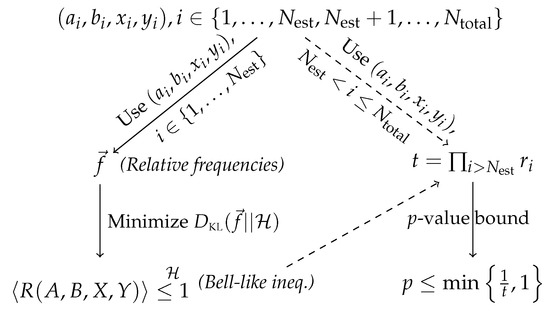