Recent developments in solar thermal systems have aroused considerable interest in several countries with high solar potential. One of the most promising solar driven technologies is the solar thermal dish-Stirling system. One of the main issues of the solar dish–Stirling system is thermal losses from its components. The majority of the thermal losses of the system occur through its receiver before the thermal energy is converted to electrical energy by the Stirling engine. The goal of this investigation is to analyze the thermal performance of the receiver of a standalone pilot solar dish–Stirling system installed in Kerman City, Iran, to be used in remote off-grid areas of the Kerman Province. An analytical model was developed to predict the input energy, thermal losses, and thermal efficiency of the receiver. The receiver thermal model was first validated by comparing simulation results to experimental measurements for the EuroDish project. Then, the incident flux intensity intercepted by the receiver aperture, the thermal losses through the receiver (including conduction, convection, and radiation losses), and the power output during daytime hours (average day of each month for a year) were predicted. The results showed that the conduction loss was small, while the convection and radiation losses played major roles in the total thermal losses through the receiver. The convection loss is dominant during the early morning and later evening hours, while radiation loss reaches its highest value near midday. Finally, the thermal efficiency of the receiver and the power output for each working hour throughout the year were calculated. The maximum performance of the system occurred at midday in the middle of July, with a predicted power output of 850 W, and a receiver efficiency of about 60%. At this time, a conduction loss of about 266 W, a convection loss of 284 W, and a radiation loss of about 2000 W were estimated. View Full-Text
Keywords: renewable energy; thermal analysis; solar thermal technology; solar dish-stirling system; receiver thermal efficiency renewable energy; thermal analysis; solar thermal technology; solar dish-stirling system; receiver thermal efficiency
►▼ Show Figures 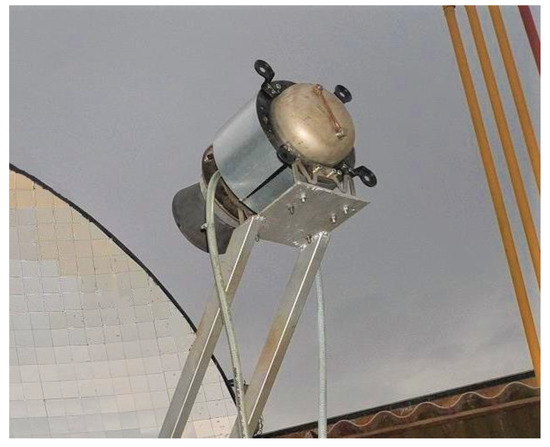