RNA-RNA interactions play a crucial role in gene regulation in living organisms. They have gained increasing interest in the field of synthetic biology because of their potential applications in medicine and biotechnology. However, few novel regulators based on RNA-RNA interactions with desired structures and functions have been developed due to the challenges of developing design tools. Recently, we proposed a novel tool, called iDoDe, for designing RNA-RNA interacting sequences by first decomposing RNA structures into interacting domains and then designing each domain using a stochastic algorithm. However, iDoDe did not provide an optimal solution because it still lacks a mechanism to optimize the design. In this work, we have further developed the tool by incorporating a genetic algorithm (GA) to find an RNA solution with maximized structural similarity and minimized hybridized RNA energy, and renamed the tool iDoRNA. A set of suitable parameters for the genetic algorithm were determined and found to be a weighting factor of 0.7, a crossover rate of 0.9, a mutation rate of 0.1, and the number of individuals per population set to 8. We demonstrated the performance of iDoRNA in comparison with iDoDe by using six RNA-RNA interaction models. It was found that iDoRNA could efficiently generate all models of interacting RNAs with far more accuracy and required far less computational time than iDoDe. Moreover, we compared the design performance of our tool against existing design tools using forty-four RNA-RNA interaction models. The results showed that the performance of iDoRNA is better than RiboMaker when considering the ensemble defect, the fitness score and computation time usage. However, it appears that iDoRNA is outperformed by NUPACK and RNAiFold 2.0 when considering the ensemble defect. Nevertheless, iDoRNA can still be an useful alternative tool for designing novel RNA-RNA interactions in synthetic biology research. The source code of iDoRNA can be downloaded from the site http://synbio.sbi.kmutt.ac.th. View Full-Text
Keywords: synthetic RNA; decomposition-based design; genetic algorithm synthetic RNA; decomposition-based design; genetic algorithm
►▼ Show Figures 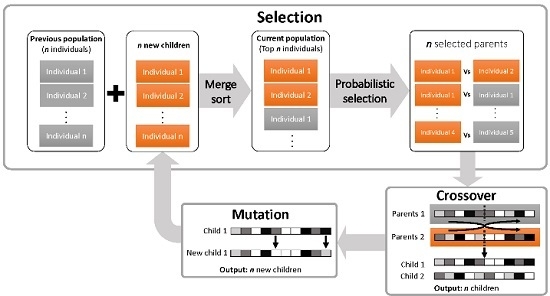