Collective emotional behavior of users is frequently observed on various Web portals; however, its complexity and the role of emotions in the acting mechanisms are still not thoroughly understood. In this work, using the empirical data and agent-based modeling, a parallel analysis is performed of two archetypal systems—Blogs and Internet-Relayed-Chats—both of which maintain self-organized dynamics but not the same communication rules and time scales. The emphasis is on quantifying the collective emotions by means of fractal analysis of the underlying processes as well as topology of social networks, which arise and co-evolve in these stochastic processes. The results reveal that two distinct mechanisms, which are based on different use of emotions (an emotion is characterized by two components, arousal and valence), are intrinsically associated with two classes of emergent social graphs. Their hallmarks are the evolution of communities in accordance with the excess of the negative emotions on popular Blogs, on one side, and smooth spreading of the Bot’s emotional impact over the entire hierarchical network of chats, on the other. Another emphasis of this work is on the understanding of nonextensivity of the emotion dynamics; it was found that, in its own way, each mechanism leads to a reduced phase space of the emotion components when the collective dynamics takes place. That a non-additive entropy describes emotion dynamics, is further confirmed by computing the q-generalized Kolmogorov-Sinai entropy rate in the empirical data of chats as well as in the simulations of interacting emotional agents and Bots. View Full-Text
Keywords: online social dynamics; complex networks; emotional Bots; detrended time series; Kolmogorov-Sinai entropy rate; nonextensivity; agent-based modeling online social dynamics; complex networks; emotional Bots; detrended time series; Kolmogorov-Sinai entropy rate; nonextensivity; agent-based modeling
►▼ Show Figures 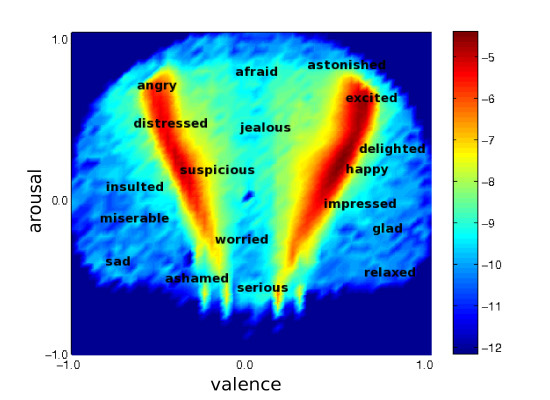