Data Types and the Phylogeny of Neoaves

Some of the earliest studies using molecular data to resolve evolutionary history separated birds into three main groups: Paleognathae (ostriches and allies), Galloanseres (ducks and chickens), and Neoaves (the remaining ~95% of avian species). The early evolution of Neoaves, however, has remained challenging to understand, even as data from whole genomes have become available. We have recently proposed that some of the conflicts among recent studies may be due to the type of genomic data that is analyzed (regions that code for proteins versus regions that do not). However, a rigorous examination of this hypothesis using coding and non-coding data from the same genomic regions sequenced from a relatively large number of species has not yet been conducted. Here we perform such an analysis and show that data type does influence the methods used to infer evolutionary relationships from molecular sequences. We also show that conducting analyses using models of sequence evolution that were chosen to minimize reconstruction errors result in coding and non-coding trees that are much more similar, and we add to the evidence that non-coding data provide better information regarding neoavian relationships. While a few relationships remain problematic, we are approaching a good understanding of the evolutionary history for major avian groups.

The phylogeny of Neoaves, the largest clade of extant birds, has remained unclear despite intense study. The difficulty associated with resolving the early branches in Neoaves is likely driven by the rapid radiation of this group. However, conflicts among studies may be exacerbated by the data type analyzed. For example, analyses of coding exons typically yield trees that place Strisores (nightjars and allies) sister to the remaining Neoaves, while analyses of non-coding data typically yield trees where Mirandornites (flamingos and grebes) is the sister of the remaining Neoaves. Our understanding of data type effects is hampered by the fact that previous analyses have used different taxa, loci, and types of non-coding data. Herein, we provide strong corroboration of the data type effects hypothesis for Neoaves by comparing trees based on coding and non-coding data derived from the same taxa and gene regions. A simple analytical method known to minimize biases due to base composition (coding nucleotides as purines and pyrimidines) resulted in coding exon data with increased congruence to the non-coding topology using concatenated analyses. These results improve our understanding of the resolution of neoavian phylogeny and point to a challenge—data type effects—that is likely to be an important factor in phylogenetic analyses of birds (and many other taxonomic groups). Using our results, we provide a summary phylogeny that identifies well-corroborated relationships and highlights specific nodes where future efforts should focus. View Full-Text
Keywords: RY coding; GC content; partitioned analyses; multispecies coalescent; phylogenomics; raptors; waterbirds; landbirds RY coding; GC content; partitioned analyses; multispecies coalescent; phylogenomics; raptors; waterbirds; landbirds
►▼ Show Figures 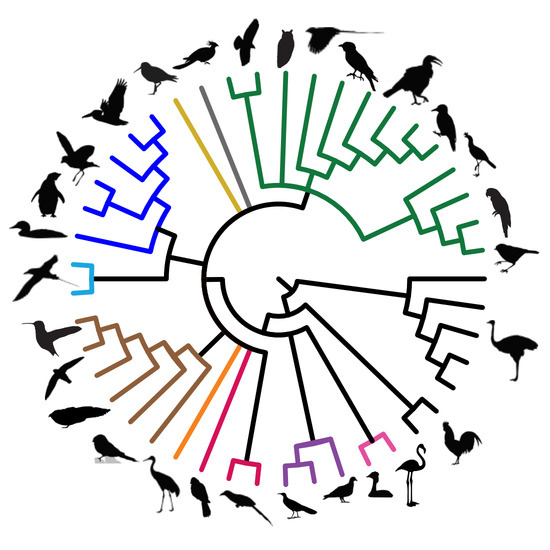