The recent availability of soybean cultivars with resistance to dicamba herbicide has increased the risk of injury in susceptible cultivars, mainly as a result of particle drift. To predict and identify the damage caused by this herbicide requires great accuracy. The objective of this work was to evaluate the injury caused by the simulated drift of dicamba on soybean (nonresistant to dicamba) plants assessed visually and using the Triangular Greenness Index (TGI) from images obtained from Remotely Piloted Aircraft (RPA). The study was conducted in a randomized complete block design with four replications during the 2019/2020 growing season, and the treatments consisted of the application of six doses of dicamba (0, 0.28, 0.56, 5.6, 28, and 112 g acid equivalent dicamba ha−1) on soybean plants at the third node growth stage. For the evaluation of treatments using the TGI technique, spectral data acquired through a Red Green Blue (RGB) sensor attached to an RPA was used. The variables studied were the visual estimation of injury, TGI response at 7 and 21 days after application, plant height, and crop yield. The exposure to the herbicide caused a reduction in plant height and crop yield. Vegetation indices, such as TGI, have the potential to be used in the evaluation of injury caused by dicamba, and may be used to cover large areas in a less subjective way than visual assessments. View Full-Text
Keywords: Glycine max; simulated drift; UAV; TGI; precision agriculture Glycine max; simulated drift; UAV; TGI; precision agriculture
►▼ Show Figures 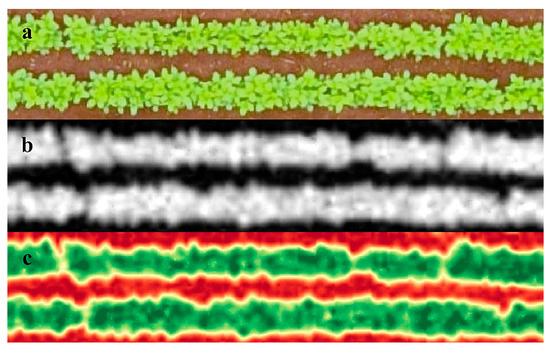