Rollers/crimpers have been used to terminate cover crops typically with supplemental herbicide application to speed-up termination. Due to environmental concerns, there is a need to reduce herbicide use. In the Southern USA, the cash crop is typically planted three weeks after a rolled cover crop reaches more than 90% kill rate which eliminates competition with the cash crop for water and nutrients. A three-year replicated field experiment was initiated in the fall of 2014 to determine the effects of recurring rolling by experimental rollers/crimpers in terminating a cereal rye cover crop in central Alabama and how multiple rolling affected soil strength. Experimental 2-stage (one smooth drum and one crimping drum), 4-stage (one smooth drum and three crimping drums), spiral, and smooth rollers were tested to roll rye 1, 2, and 3 times (conducted at the same day). A smooth roller with mounted spray boom applying glyphosate rolling once was also evaluated, and untreated rye was the control. Rye was terminated at the milk growth stage and was evaluated one, two and three weeks after rolling. At one week after rolling, the highest rye kill rate was obtained with rolling three times by the 4-stage (96%), 2-stage (92%), spiral roller (81%); rolling once by the smooth roller with glyphosate (94%) compared to the untreated rye at 37%. At two weeks after rolling no differences among rollers were found (91% to 98%); the untreated rye was 54%. Similarly, at three weeks after rolling no differences were detected among rollers (99% to 100%); the untreated rye was 86%. Rolling 2 or 3 times compared with rolling one time did not cause soil compaction. However, at the 15 cm depth cone index (CI) did exceed 2 MPa (a critical value of root penetration restriction); although this CI increase was solely related to decrease in gravimetric soil moisture content (GMC). In addition, over three growing seasons, the seed cotton yield was not affected by rolling treatments with the average yield of 3601 kg ha−1 (1512 kg ha−1 of cotton lint). View Full-Text
Keywords: roller/crimper; mechanical termination; cover crop; soil strength; gravimetric soil water; no-till roller/crimper; mechanical termination; cover crop; soil strength; gravimetric soil water; no-till
►▼ Show Figures 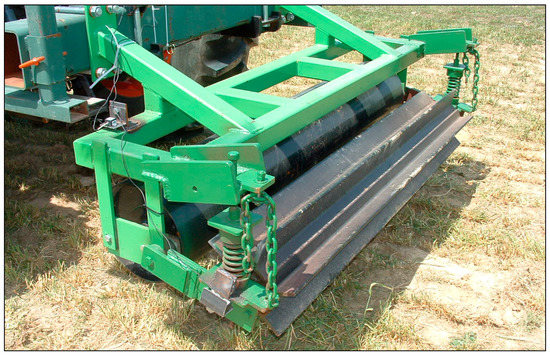