A Cross-Sectional Study of the Associations between Chronotype, Social Jetlag and Subjective Sleep Quality in Healthy Adults
Previous Article in Journal

Antoine U. Viola 6 and

We examined whether ambient lighting conditions during extended wakefulness modulate the homeostatic response to sleep loss as indexed by. slow wave sleep (SWS) and electroencephalographic (EEG) slow-wave activity (SWA) in healthy young and older volunteers. Thirty-eight young and older participants underwent 40 hours of extended wakefulness [i.e., sleep deprivation (SD)] once under dim light (DL: 8 lux, 2800 K), and once under either white light (WL: 250 lux, 2800 K) or blue-enriched white light (BL: 250 lux, 9000 K) exposure. Subjective sleepiness was assessed hourly and polysomnography was quantified during the baseline night prior to the 40-h SD and during the subsequent recovery night. Both the young and older participants responded with a higher homeostatic sleep response to 40-h SD after WL and BL than after DL. This was indexed by a significantly faster intra-night accumulation of SWS and a significantly higher response in relative EEG SWA during the recovery night after WL and BL than after DL for both age groups. No significant differences were observed between the WL and BL condition for these two particular SWS and SWA measures. Subjective sleepiness ratings during the 40-h SD were significantly reduced under both WL and BL compared to DL, but were not significantly associated with markers of sleep homeostasis in both age groups. Our data indicate that not only the duration of prior wakefulness, but also the experienced illuminance during wakefulness affects homeostatic sleep regulation in humans. Thus, working extended hours under low illuminance may negatively impact subsequent sleep intensity in humans.
Keywords: circadian timing system; EEG; spectral analysis; sleepiness; melanopic equivalent daylight illuminance; melatonin; slow-wave activity circadian timing system; EEG; spectral analysis; sleepiness; melanopic equivalent daylight illuminance; melatonin; slow-wave activity

It is firmly established that human sleep regulation is under the control of the circadian timing system and an hourglass process keeping track of prior sleep-wake history as conceptualized in the two-process model of sleep regulation (for a review see [1]). In fact, the amount of time spent awake prior to sleep onset is the most important determinant of sleep intensity in mammals [2]. Sleep homeostasis can be accurately tracked, quantified and modelled by electroencephalographic (EEG) slow-wave activity (SWA) during non-rapid eye movement (NREM) sleep [3], which is considered an important marker for optimal brain functioning [4]. Later studies refined the homeostatic sleep-wake process with respect to its brain topography, with frontal brain areas more susceptible in their response to prior wake duration [5,6] and also with respect to experience-dependent aspects during wakefulness. Thus, superimposed on the global homeostatic regulation of SWA, local SWA increases have been reported to depend on scheduled activity/experience such as physical activity [7], learning [8], and stress [9] volunteers or animals were exposed to prior sleep. Along these lines, Tononi and Cirelli have proposed the synaptic homeostasis hypothesis (SHY), which assumes that sleep serves to re-establish synaptic processes which have been challenged by different experiences during prior wakefulness (for a review see [10]). According to the SHY, “sleep is the price to pay for waking plasticity, to avoid runaway potentiation, decreased signal-to-noise ratio, and impaired learning due to saturation” [10].
Interestingly, the potential impact on sleep homeostatic aspects of environmental factors such as light, noise and temperature experienced during extended wakefulness have, to our best knowledge, not yet been investigated systematically under controlled laboratory conditions in humans. Light is of particular interest, since, besides its function for vision, it also activates non-image forming brain regions implicated in the regulation of circadian rhythms, mood, sleep and learning (for a review see [11]). In addition, humans living in modern societies are spending more time indoors under rather dim light conditions [12], which potentially exacerbates when working extended hours, particularly during the night. Thus, here we investigated whether different ambient lighting conditions experienced during extended wakefulness impact on sleep homeostatic regulation. The rationale for this study was twofold: First, we have evidence that evening lighting conditions modulate EEG SWA during subsequent sleep after a normal waking day [13,14,15] and second, although sleep homeostatic processes are fully operational with age, the relative SWA response to sleep loss is diminished in frontal brain areas in older compared to young healthy volunteers [16]. Thus, we hypothesized (1) that the increase in frontal EEG SWA after sleep loss is more pronounced after experienced illuminance levels at 250 lux than after experienced dim illuminance at < 8 lux in both healthy young and older volunteers, and (2) that the light induced enhancement in the EEG SWA response is stronger in young than older participants.

All participants gave written informed consent for inclusion before they participated in the study. The study protocol, screening questionnaires and consent forms were approved by the local ethics committee (EKBB/Ethikkommission beider Basel, Switzerland, Project identification code: 247/11), and conformed to the Declaration of Helsinki.

Potential study volunteers completed a general medical questionnaire, the Epworth Sleepiness Scale (ESS), the Horne Ostberg Morningness Eveningness Questionnaire (MEQ), the Munich Chronotype Questionnaire (MCTQ), the Pittsburgh Sleep Quality Index (PSQI), and Beck Depression Inventory II (BDI-II). Based on the participants’ questionnaire data, only participants fulfilling the inclusion criteria [for details see [21]] were selected for study participation. In a next step, we ruled out sleep disturbances, and tested the volunteers’ ability to sleep in a new environment by letting them sleep one night at our Centre for Chronobiology with the entire polysomnographic (PSG) setup. In addition, each participant underwent a medical screening including an ophthalmologic examination (i.e., visual field, color vision, pupillary reflex). Female study participants took a pregnancy test and completed the study during the luteal phase of their menstrual cycle. The experimental part of the study started one week before the in-laboratory part, during which the volunteers were asked to abstain from excessive alcohol and caffeine consumption and to maintain a rather regular sleep-wake cycle (i.e., 8-h sleep at night within a regular bedtime +/− 30 min and no daytime napping) to ensure proper circadian entrainment of the sleep-wake cycle with the light-dark cycle. Compliance was verified via the use of wrist actigraphs (Actiwatch L, Cambridge Neurotechnologies, Cambridge, UK) and self-reported sleep logs. Thirty-eight healthy volunteers finally met all inclusion criteria out of an initial 650 potential participants. The young group comprised 26 participants between 20 and 35 years (11 females, 16 males, mean age (SE): 24.96 (0.58) years) and the older group included 12 participants between 55 and 75 years (3 females and 9 males, mean age (SE): 63.58 (1.27) years). For more information please refer to table 3 of [21].

The PSG was continuously recorded during the entire 62-h stay in the laboratory. The PSG recording system (Vitaport Ambulatory system (Vitaport-3 digital recorder TEMEC Instruments BV, Kerkrade, the Netherlands) included 12 EEG derivations (Fz, F3, F4, Cz, C3, C4, Pz, P3, P4, Oz, O1, O2) referenced against linked mastoids (A1 and A2), two electrooculograms, one bipolar submental electromyogram, and one bipolar electrocardiogram. After low pass filtering all signals at 30 Hz (fourth order Bessel type anti-aliasing, total 24 dB/Oct, time constant of 1 s), online digitization with a 12 bit AD converter (0.15 μV/bit) with a sampling rate of 128 Hz for the EEG, the raw signals were stored on a flash RAM card. A single experienced sleep technician (M.F. see acknowledgments) scored the sleep stages per 20-s epochs according the standard criteria. For time course analyses we collapsed these scorings (as means per interval) into half-hourly intervals. The EEG was subjected to spectral analysis using a fast Fourier transformation (FFT; Hanning 4-s window). EEG power spectra were computed during Non-rapid eye movement (NREM) sleep in the frequency range from 0 to 20 Hz, by averaging artifact-free 4-s epochs were averaged across 20-s epochs for each EEG derivation. All PSG recordings were manually inspected for artifacts EEG channel losses etc., resulting in a total n = 24 for DL, n = 18 for WL, n = 19 for BL in the young, and a n = 12 for DL, n = 11 for WL, and n = 8 BL for the older participants.

Subjective sleepiness was rated by the volunteers on the Karolinska sleepiness symptoms check list (KSSCL) [39] at 30-min intervals. For analyses of time courses, we collapsed these ratings into 4-hourly bins by taking the average per bin, individual, condition and night.

Our data show that the light environment impacts on human homeostatic sleep regulation. This adds to the growing insight that besides its impact on circadian physiology, light is an important environmental factor in shaping sleep-wake behavior. Although, there is evidence for a link between light exposure and subsequent sleep in the field [23], the results from this laboratory study need further validation under less controlled situations. However, they may have important ramifications when it comes to designing light solutions that support alertness or sleep promotion, while minimizing effects on the circadian timing system.

C.C. initiated writing of this paper and managed its execution as well as the final analysis. C.C. and V.G. wrote an initial draft. V.G. carried out the study, was responsible for the study administration and a first analysis of the data. C.C. and A.U.V. served as supervisors of the study. C.R., M.M., L.J.M.S., and C.S. contributed equally and provided critical review of and revisions to the manuscript. All authors have approved the final version of this manuscript.

This research was supported by the Velux Foundation Switzerland and Philips, The Netherlands and in part by the Swiss National Foundation (#310030_130689; P1BSP1-155209).

We thank Krebs for medical screenings, Claudia Renz, Marie-France Dattler and all the helpers for their help in data acquisition, and the volunteers for participating in this demanding study.

C.C. has had the following commercial interests in the last two years (2017–2018) related to lighting: honoraria, travel, accommodation and/or meals for invited keynote lectures, conference presentations or teaching from Toshiba Materials, Velux, Firalux, Lighting Europe, Electrosuisse, Novartis, Roche, Elite, Servier, and WIR Bank. C.C. is a member of the Daylight Academy. L.J.M.S. was an employee of Philips Lighting/Signify, the Netherlands until July 2019. His current TU/e position is partially funded by Signify. C.R. M.M., A.U.V., and C.S. do not report any conflict of interest. V.G. does not report any conflict of interest related to lighting. 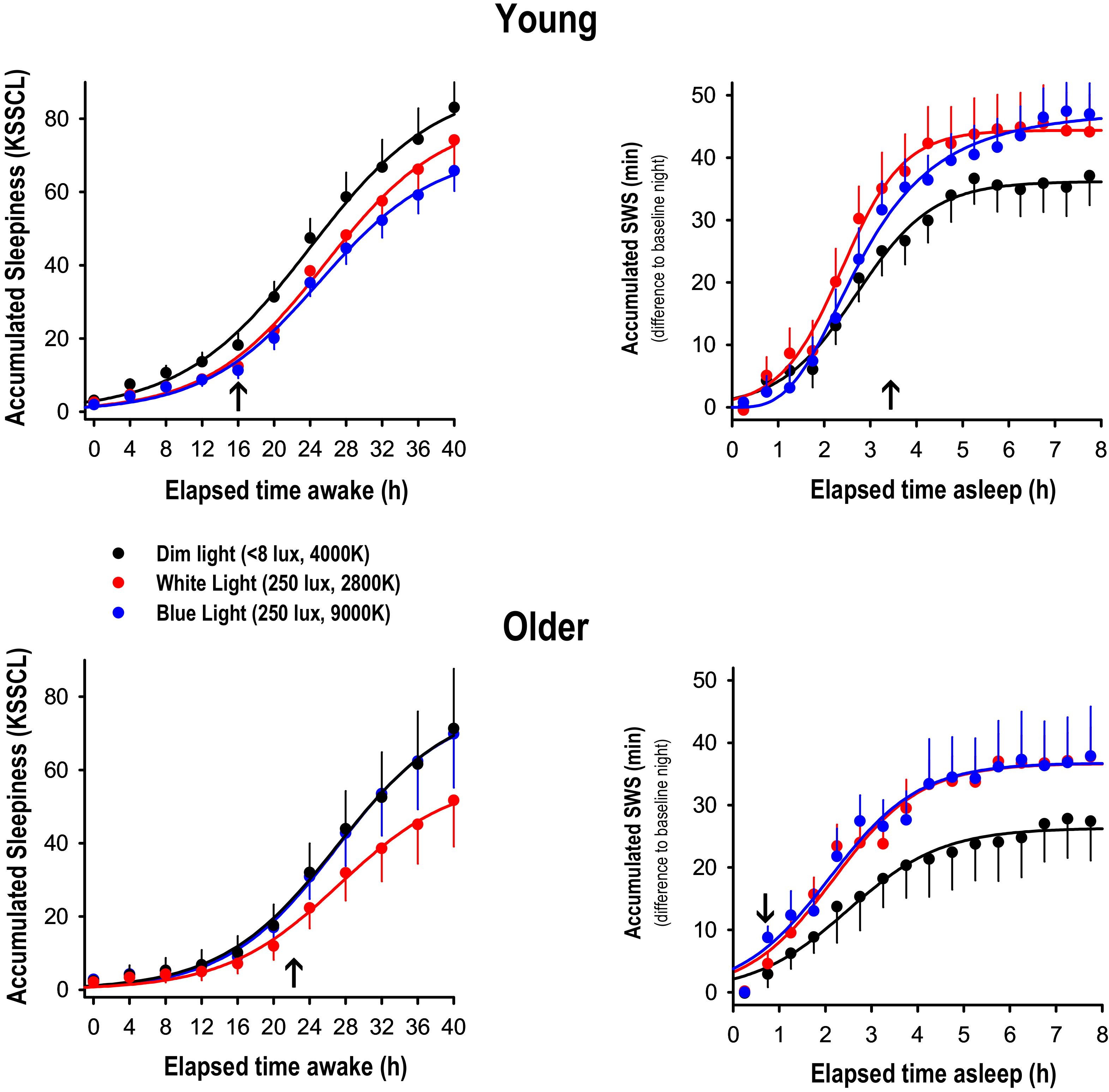 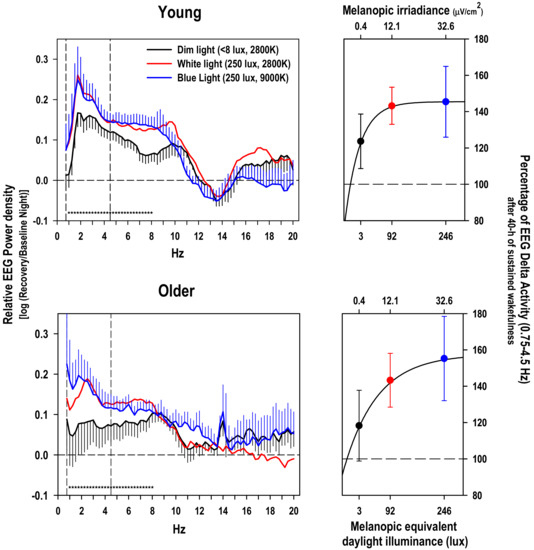