A Cross-Sectional Study of the Associations between Chronotype, Social Jetlag and Subjective Sleep Quality in Healthy Adults
Previous Article in Journal

Antoine U. Viola 6 and

We examined whether ambient lighting conditions during extended wakefulness modulate the homeostatic response to sleep loss as indexed by. slow wave sleep (SWS) and electroencephalographic (EEG) slow-wave activity (SWA) in healthy young and older volunteers. Thirty-eight young and older participants underwent 40 hours of extended wakefulness [i.e., sleep deprivation (SD)] once under dim light (DL: 8 lux, 2800 K), and once under either white light (WL: 250 lux, 2800 K) or blue-enriched white light (BL: 250 lux, 9000 K) exposure. Subjective sleepiness was assessed hourly and polysomnography was quantified during the baseline night prior to the 40-h SD and during the subsequent recovery night. Both the young and older participants responded with a higher homeostatic sleep response to 40-h SD after WL and BL than after DL. This was indexed by a significantly faster intra-night accumulation of SWS and a significantly higher response in relative EEG SWA during the recovery night after WL and BL than after DL for both age groups. No significant differences were observed between the WL and BL condition for these two particular SWS and SWA measures. Subjective sleepiness ratings during the 40-h SD were significantly reduced under both WL and BL compared to DL, but were not significantly associated with markers of sleep homeostasis in both age groups. Our data indicate that not only the duration of prior wakefulness, but also the experienced illuminance during wakefulness affects homeostatic sleep regulation in humans. Thus, working extended hours under low illuminance may negatively impact subsequent sleep intensity in humans. View Full-Text
Keywords: circadian timing system; EEG; spectral analysis; sleepiness; melanopic equivalent daylight illuminance; melatonin; slow-wave activity circadian timing system; EEG; spectral analysis; sleepiness; melanopic equivalent daylight illuminance; melatonin; slow-wave activity
►▼ Show Figures 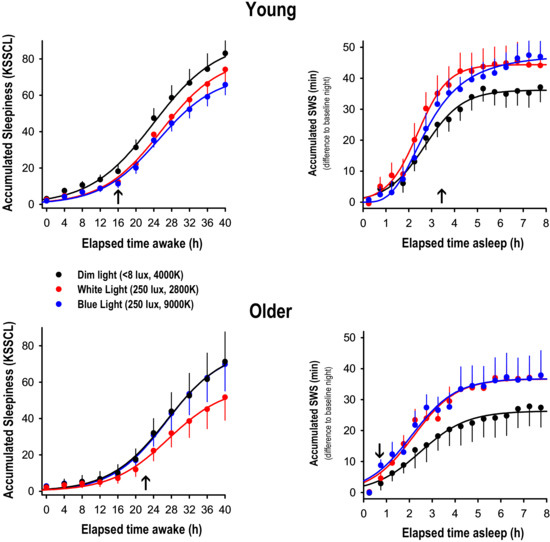