Automated brain tumor segmenters typically run a “skull-stripping” pre-process to extract the brain from the 3D image, before segmenting the area of interest within the extracted volume. We demonstrate that an effective existing segmenter can be improved by replacing its skull-stripper component with one that instead uses a registration-based approach. In particular, we compare our automated brain segmentation system with the original system as well as three other approaches that differ only by using a different skull-stripper—BET, HWA, and ROBEX: (1) Over scans of 120 patients with brain tumors, our system’s segmentation accuracy (Dice score with respect to expert segmentation) is 8.6% (resp. 2.7%) better than the original system on gross tumor volumes (resp. edema); (2) Over 103 scans of controls, the new system found 92.9% (resp. 57.8%) fewer false positives on T1C (resp. FLAIR) volumes. (The other three methods were significantly worse on both tasks). Finally, the new registration-based approach is over 15% faster than the original, requiring on average only 178 CPU seconds per volume. View Full-Text
Keywords: tumor segmentation; skull extraction; brain extraction; registration; BET; HWA; ROBEX tumor segmentation; skull extraction; brain extraction; registration; BET; HWA; ROBEX
►▼ Show Figures 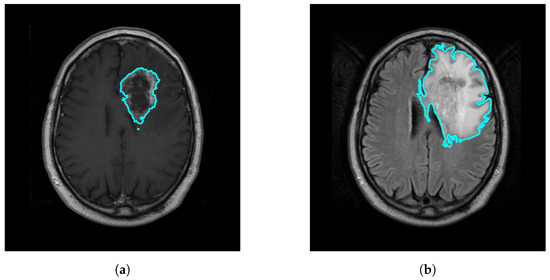