Although prescribed fire is a forest management tool annually applied to nearly one million hectares across the southeastern United States, little is known about how prescribed fire influences soil water quality in the region. Sub-surface pools of nitrogen (N) and phosphorous (P) are important indicators of ecosystem response to disturbance and are likely modified, at least temporarily, by fire. We undertook a five-month study to examine sub-surface nutrient concentrations and pH in a managed yellow pine (Pinus sp.) forest before and after a low-severity dormant season prescribed fire in the Southern Blue Ridge Mountains of South Carolina. Between February and July 2019, soil solution was collected weekly from a 30 cm porous cup suction lysimeters and analyzed for ammonium (NH4+), nitrate (NO3-), and orthophosphate (PO43-), as well as pH. We compared the five-month mean and maximum nutrient concentrations and pH to quantify the immediate effects of prescribed fire. The prescribed fire caused significant pH buffering towards neutrality in burned transects relative to the control. There was no change in soil solution NO3-. The prescribed fire caused a significant increase in maximum NH4+ (18.0 mg/L) and PO43- (6.6 mg/L) concentrations. Post-fire NH4+ concentrations reached a maximum of 18.0 mg/L before declining three weeks post-fire. PO43- concentrations in burned stands reached a maximum of 6.6 mg/L and remained elevated for four weeks post-fire. Nutrient leaching was minimal due to complexion to soil cations and ground water uptake from regenerating vegetation at the onset of the growing season. The PO43- and NH4+ pulses in this study are likely influenced by fire-induced changes to soil chemistry and future studies should examine the homogeneity of pH buffering and nutrient pulses across the burned landscape. View Full-Text
Keywords: prescribed fire; nitrogen; phosphorous; water quality; forest management prescribed fire; nitrogen; phosphorous; water quality; forest management
►▼ Show Figures 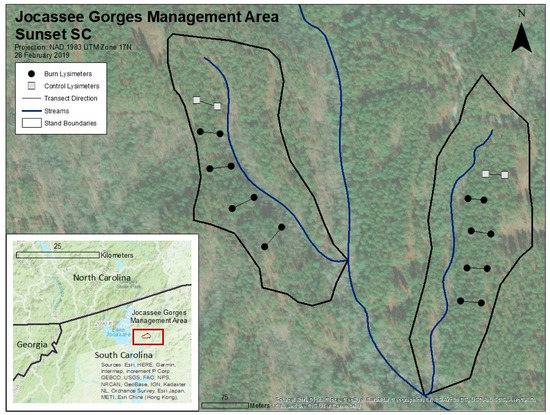