This study focused on the analysis of land-use/land-cover changes and their impact on flood runoff, flood hazards and inundation, focusing in the Pampanga River basin of the Philippines. The land-cover maps for the years 1996 and 2016 were generated using Landsat images, and the land cover changes were analyzed using TerrSet Geospatial Monitoring and Modeling System (TGMMS). Based on an empirical approach and considering variable factors, the land-cover maps for the future were predicted using Land Change Modeler (LCM). After preparation of land-cover maps for past and future years, flood characteristics were analyzed using a distributed hydrological model named the rainfall runoff inundation (RRI) model with a land-cover map for different years. The impacts of land cover changes on flood runoff, flood volume and flood inundation were analyzed for 50- and 100-year floods. The results show that flood runoff, flood inundation volume and flood extent areas may increase in the future due to land-cover change in the basin. View Full-Text
Keywords: land cover change; machine learning; Landsat images; GIS; flood hazard; rainfall-runoff-inundation land cover change; machine learning; Landsat images; GIS; flood hazard; rainfall-runoff-inundation
►▼ Show Figures 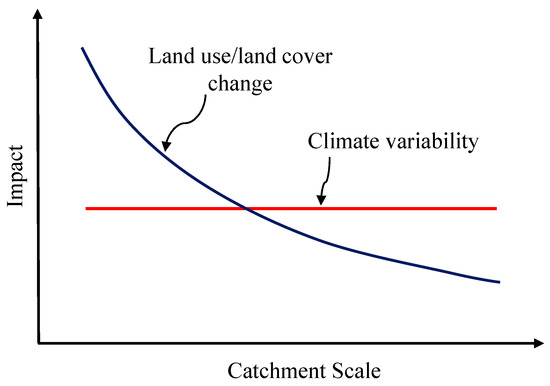 Shrestha, B.B. Approach for Analysis of Land-Cover Changes and Their Impact on Flooding Regime. Quaternary 2019, 2, 27.


Shrestha BB. Approach for Analysis of Land-Cover Changes and Their Impact on Flooding Regime. Quaternary. 2019; 2(3):27.