As the prevalence of lymphatic filariasis declines, it becomes crucial to adequately eliminate residual areas of endemicity and implement surveillance. To this end, serological assays have been developed, including the Bm14 Filariasis CELISA which recommends a specific optical density cut-off level. We used mixture modelling to assess positive cut-offs of Bm14 serology in children in Vanuatu using historical OD (Optical Density) ELISA values collected from a transmission assessment survey (2005) and a targeted child survey (2008). Mixture modelling is a statistical technique using probability distributions to identify subpopulations of positive and negative results (absolute cut-off value) and an 80% indeterminate range around the absolute cut-off (80% cut-off). Depending on programmatic choices, utilizing the lower 80% cut-off ensures the inclusion of all likely positives, however with the trade-off of lower specificity. For 2005, country-wide antibody prevalence estimates varied from 6.4% (previous cut-off) through 9.0% (absolute cut-off) to 17.3% (lower 80% cut-off). This corroborated historical evidence of hotspots in Pentecost Island in Penama province. For 2008, there were no differences in the prevalence rates using any of the thresholds. In conclusion, mixture modelling is a powerful tool that allows closer monitoring of residual transmission spots and these findings supported additional monitoring which was conducted in Penama in later years. Utilizing a statistical data-based cut-off, as opposed to a universal cut-off, may help guide program decisions that are better suited to the national program. View Full-Text
Keywords: mixture modelling; filariasis; CELISA; R statistics; elimination; surveillance; serology; Bm14 mixture modelling; filariasis; CELISA; R statistics; elimination; surveillance; serology; Bm14
►▼ Show Figures 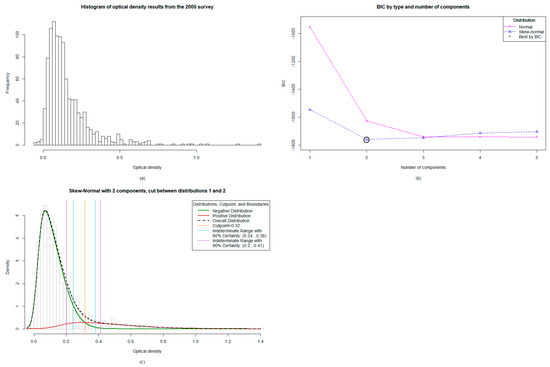