Melioidosis in Thailand: Present and Future

Melioidosis in Vietnam: Recently Improved Recognition but still an Uncertain Disease Burden after Almost a Century of Reporting

The first cases of human melioidosis were described in Vietnam in the 1920s, almost a century ago. It was in Vietnam in the thirties that the saprophytic nature of B. pseudomallei was first recognized. Although a significant number of French and U.S. soldiers acquired the disease during the Vietnam wars, indigenous cases in the Vietnamese population were only sporadically reported over many decades. After reunification in 1975, only two retrospective studies reported relatively small numbers of indigenous cases from single tertiary care hospitals located in the biggest cities in the South and the North, respectively. Studies from provincial hospitals throughout the country were missing until the Research Network on Melioidosis and Burkholderia pseudomallei (RENOMAB) project started in 2014. From then on seminars, workshops, and national scientific conferences on melioidosis have been conducted to raise awareness among physicians and clinical laboratory staff. This led to the recognition of a significant number of cases in at least 36 hospitals in 26 provinces and cities throughout Vietnam. Although a widespread distribution of melioidosis has now been documented, there are still challenges to understand the true epidemiology of the disease. Establishment of national guidelines for diagnosis, management, and reporting of the disease together with more investigations on animal melioidosis, genomic diversity of B. pseudomallei and its environmental distribution are required. View Full-Text
Keywords: melioidosis; Burkholderia pseudomallei; Vietnam; public awareness; animal; environment melioidosis; Burkholderia pseudomallei; Vietnam; public awareness; animal; environment
►▼ Show Figures 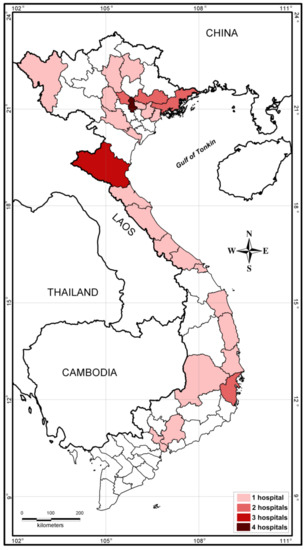