The Importance of Water Typologies in Lay Entomologies of Aedes aegypti Habitat, Breeding and Dengue Risk: A Study from Northern Australia
Previous Article in Journal

A Review of Scrub Typhus (Orientia tsutsugamushi and Related Organisms): Then, Now, and Tomorrow
Previous Article in Special Issue

The Rise of Imported Dengue Infections in Victoria, Australia, 2010–2016

Dengue notifications have increased dramatically over the past seven years in Victoria, Australia—a trend which has been seen nationally and reflects increased cases internationally. We reviewed the epidemiology of dengue among Victorian travellers, changes in diagnostic methods and describe the burden placed on local health systems resulting from this disease of public health importance. Cases of dengue notified to the Department of Health and Human Services in Victoria, Australia, between 1 January 2010 and 31 December 2016 were included in this review. Demographic, clinical, diagnostic methods, and risk factor data were examined using descriptive epidemiological analyses. Cases of dengue increased on average by 22% per year, with a total of 2187 cases (5.5 cases/100,000 population) notified over the 7-year reporting period. The most frequently reported country of acquisition was Indonesia (45%) followed by Thailand (14%). The use of multiple diagnostic methods, including the non-structural protein 1 antigen (NS1Ag) detection test, increased over time. The median time between onset of illness and diagnosis diminished from 9 days (IQR: 2–15) in 2010 to 4 days (IQR: 2–7) in 2016. Proportionally more cases were discharged directly from emergency departments in recent years (10% in 2010 to 28% in 2016, p < 0.001).The increasing incidence of dengue in Australia is reflective of its growing prominence as a travel medicine problem in western countries. For travellers with non-severe dengue, the improved timeliness of dengue diagnostics allows for consideration of best practice ambulatory management approaches as used in endemic areas. View Full-Text
Keywords: dengue; travel; epidemiology; healthcare dengue; travel; epidemiology; healthcare
►▼ Show Figures 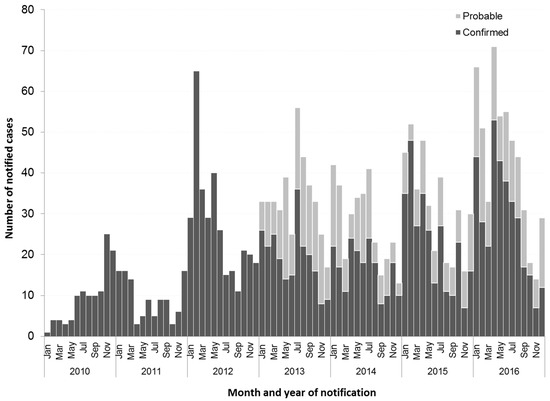