Why Is Deep Learning Challenging for Printed Circuit Board (PCB) Component Recognition and How Can We Address It?
Previous Article in Journal

Schemes generating cryptographic keys from arrays of pre-formed Resistive Random Access (ReRAM) cells, called memristors, can also be used for the design of fast true random number generators (TRNG’s) of exceptional quality, while consuming low levels of electric power. Natural randomness is formed in the large stochastic cell-to-cell variations in resistance values at low injected currents in the pre-formed range. The proposed TRNG scheme can be designed with three interconnected blocks: (i) a pseudo-random number generator that acts as an extended output function to generate a stream of addresses pointing randomly at the array of ReRAM cells; (ii) a method to read the resistance values of these cells with a low injected current, and to convert the values into a stream of random bits; and, if needed, (iii) a method to further enhance the randomness of this stream such as mathematical, Boolean, and cryptographic algorithms. The natural stochastic properties of the ReRAM cells in the pre-forming range, at low currents, have been analyzed and demonstrated by measuring a statistically significant number of cells. Various implementations of the TRNGs with ReRAM arrays are presented in this paper. View Full-Text
Keywords: random number generation; resistive memories; cryptographic systems; unclonable functions; low power random number generation; resistive memories; cryptographic systems; unclonable functions; low power
►▼ Show Figures 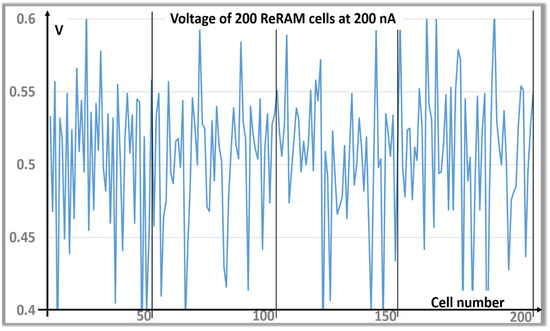 Bertrand Cambou
Dr. Bertrand Cambou, Professor at NAU since 2015, has research, and teaching interests in nano-electronics, and cyber-security. He is the Principal Investigator of “Development of technology modules for Computing Diversity” a multi-million dollar research program funded by the Airforce Research Laboratory involving NAU, Sandia Laboratory, Lockheed Martin, and Crossbar inc. He hold 65 granted patents, in 2016 he was nominated Invention Ambassador by the American Association for the Advancement of Science, and in 2019 he was elected senior member of the National Academy of Inventors. In 2019, he received the Research and Creative Activity (RCA) award from the president of the University. Before NAU, he was worked at Crocus Technologies, Advanced Micro Devices, Gemplus, and Ingenico. Previously, at Motorola Semiconductor (now NXP-Freescale) where he was CTO, Dr. Cambou was nominated “Distinguished Innovator” and was a member of the Scientific. From January 1997 to April 1999 he was co-directing the PowerPC alliance between Motorola, IBM, and Apple. He holds a Doctorate degree in Electronics from Paris-Saclay University, an Engineering degree from Supelec Paris-Saclay, and a “Maitrise” degree in Physics from Toulouse-III University.

Michael Partridge
PhD student at NAU in Informatics/cybersecurity
Zoom | Orient | As Lines | As Sticks | As Cartoon | As Surface | Previous Scene | Next Scene
We use cookies on our website to ensure you get the best experience. Read more about our cookies here.
Accept
We have just recently launched a new version of our website. Help us to further improve by taking part in this short 5 minute survey here. here.
Never show this again