Up to 30% of ischemic stroke cases are due to large vessel occlusion (LVO), causing significant morbidity. Studies have shown that the collateral circulation of patients with acute ischemic stroke (AIS) secondary to LVO can predict their clinical and radiological outcomes. The aim of this study is to identify baseline patient characteristics that can help predict the collateral status of these patients for improved triage. In this IRB approved retrospective study, consecutive patients presenting with AIS secondary to anterior circulation LVO were identified between September 2019 and August 2021. The baseline patient characteristics, laboratory values, imaging features and outcomes were collected using a manual chart review. From the 181 consecutive patients initially reviewed, 54 were confirmed with a clinical diagnosis of AIS and anterior circulation LVO. In patients with poor collateral status, the body mass index (BMI) was found to be significantly lower compared to those with good collateral status (26.4 ± 5.6 vs. 31.7 ± 12.3; p = 0.045). BMI of >35 kg/m2 was found to predict the presence of good collateral status. Age was found to be significantly higher (70.5 ± 9.6 vs. 58.9 ± 15.6; p = 0.034) in patients with poor collateral status and M1 strokes associated with older age and BMI.
Keywords: acute ischemic; hypoperfusion; collaterals status; hypoperfusion index acute ischemic; hypoperfusion; collaterals status; hypoperfusion index

Acute ischemic stroke (AIS) secondary to large vessel occlusion (LVO) comprises approximately 24–38% of all cases [1,2]. Mechanical thrombectomy (MT) has become the standard of care for the treatment of LVOs in anterior circulation strokes within 24 h of symptom onset, leading to improved clinical outcomes [3].
Collateral status (CS), for which digital subtraction angiography is considered the reference standard, has been shown to be an independent predictor for good outcome after MT. Good CS was found to be associated with functional independence, successful reperfusion, as well as both decreased symptomatic intracranial hemorrhage and mortality [4]. Poor CS is associated with increased mortality even after successful recanalization [5]. Collateral circulation is important as it provides the brain tissue with blood supply after the vessel supplying the area has been occluded. Good collateral flow can sustain the ischemic penumbra before reperfusion therapy, thereby minimizing the growth of the ischemic core and leading to less neurological deficit [6].
Recently, there has been an increase in the use of computed tomography perfusion (CTP) with the help of automatic post-processing software. CTP provides non-invasive quantitative and rapid measures to estimate the infarct core and potentially salvageable tissue. With the help of these software, a surrogate of CS has been identified which is called the hypoperfusion index (HI). HI is calculated as the ratio of time-to-maximum (Tmax) concentration of more than 10 s divided by the time-to-maximum concentration of more than 6 s [7]. The Tmax is an artificial perfusion parameter that reflects the time delay between the arrival of contrast bolus into the proximal large arterial circulation and the brain parenchyma, and is calculated through a deconvolution step using an arterial input function [8]. In the DEFUSE 2 cohort study, HI has shown to predict the rate of infarct growth and the functional outcome at 90 days in patients presenting with AIS secondary to LVO [8].
In previous studies, it has been shown that certain baseline patient characteristics and laboratory value changes are associated with increased risk of post-MT complications and worse functional outcomes [9,10]. It has been suggested that the patient characteristics and laboratory values can predict their CS. However, to the best of our knowledge, no study to date has systematically explored these relationships when utilizing HI as an indirect imaging surrogate for CS. The aim of our study was to explore these relationships in patients presenting with AIS secondary to anterior circulation LVO who underwent MT for their stroke management.

The study population for this institutional review board (JHU-IRB00269637) approved respective study was consecutive patients with anterior circulation LVO who underwent baseline computed tomography angiography (CTA) and CTP followed by MT for their stroke management from September 2019 to August 2021. Anterior circulation LVO was defined as an occlusion of the intracranial internal carotid artery (ICA), M1 or proximal M2 segments of the middle cerebral artery (MCA).

The primary outcome measure was presence of good CS which was defined as HI of less than 0.4.

The data was collected on a secure desktop using Microsoft Office Excel 2007 (Redmond, WA, USA) and analyzed using IBM SPSS statistics (Version 22.0, Chicago, IL, USA). Continuous variables were expressed using mean and SD or median and interquartile range (IQR) based on the distribution of the variable in question. Normality for all continuous variables was assessed using the Shapiro Wilk test. Quantitative data were compared using the independent t-test. Qualitative data were compared using Chi square or Fisher’s exact tests. Univariate analysis was initially applied to examine each of the baseline variables independently. Bonferroni corrections were applied for post-hoc tests as multiple comparisons were made on the same dependent variables to reduce the risk of type 1 errors Table 1. All p-values were two sided and the p value of <0.05 was considered to be statistically significant, unless multiple comparisons were made for which Bonferroni correction was applied, in such cases a p value of <0.017 was considered to be statistically significant.

In this study, the relationships between baseline patient characteristics and CS were explored, and poor CS was found to be associated with lower BMI. Additionally, the baseline Hct of patients with proximal M2 occlusions was found to be higher than those with M1 occlusions, however, the reason for this association is not clear and needs to be explored in larger studies. The HT rate within 48 H after MT was significantly higher in patients with ICA occlusions compared to M2 occlusions, which differs from prior literature where the rate of HT has been shown to be similar between ICA and MCA occlusions [11]. The reason for this may be due to the much larger volume of territory at risk in ICA occlusions compared to M2 occlusions [12,13].
In patients suffering from AIS, collateral circulation plays an important role in maintaining the blood flow to the tissue at risk of becoming ischemic, and in reducing the risk of hemorrhagic transformation in patients undergoing MT [14]. HI has been shown to be a good surrogate for predicting the CS in patients with acute LVO [15]. Various previous studies have explored the association between patient baseline characteristics and the CS, however variable results have been reported, most likely due to the heterogenous nature of the patient population [16,17,18,19,20,21,22]. Analysis of one of the largest stroke registries, the MR CLEAN Trial and Registry, has shown that older age, male sex, high glucose levels and occlusion of the intracranial internal carotid artery terminus is associated with poor collateral grades as identified on CTA, however, association of various other baseline characteristics, such as body mass index and laboratory values, were not explored in that study [23].
The CS was characterized as poor in 54% of the patients included in this study. This may in part be explained by the older age of the patients included in this cohort. Older age has been associated with progressive loss of number of collaterals and their diameter, along with the increase in arterial tortuosity, all of which leads to an increased resistance in the collateral circulation [24].
Several studies in the literature have shown that higher BMI is associated with reduced cerebral flow and an increased risk of ischemic stroke [25,26,27,28]. However, the outcomes of strokes in patients with obesity have been shown to better than those without due to a multitude of reasons (termed the “obesity paradox”) [27,28,29,30,31]. The obesity paradox can, on a biological level, be explained by the protective effect of soluble tumor necrosis factor-alpha-receptors, which are secreted by the adipose tissue, and bind to the tumor necrosis factor-alpha circulating in the blood [32,33]. Obese patients also have elevated levels of serum lipoproteins and lipids that have been shown to play an important role in blocking the inflammatory cytokine cascade by binding to the liposaccharides in the blood, and this might be responsible for better outcomes in these patients [34,35,36]. Additionally, this study shows that the CS was better in patients with a higher BMI, which could be one of the reasons contributing to better mortality and morbidity outcomes after strokes in patients with obesity.
This study has several limitations to acknowledge. This study was a retrospective analysis at a single center, which can lead to sampling bias, however, we included consecutive patients in the study to minimize this. The data was collected with the help of a retrospective chart review, which can lead to some incorrect recording of data. The study included only patients with acute anterior circulation LVO comprising intracranial ICA, M1, and proximal M2 only. Therefore, these results are not applicable to patients with occlusions of other arterial territories. Patient outcome after MT was not assessed and therefore the results of this study cannot be used to predict the clinical outcomes of patients, although it is again important to note that several prior studies have shown that CS is an important predictive biomarker of patient outcomes, which is the purpose of utilizing CS for the current study. The CS of the patients was assessed utilizing an artificial index for CS estimation in HI. Although HI has been validated as a strong predictor of CS, it still requires further validation in larger prospective cohorts.

Patients with lower BMI and older age are associated with poor collateral status as predicted by the HI with the help of an automated software. Further investigations are necessary in larger cohorts to validate the results of this study.

The study was conducted in accordance with the Declaration of Helsinki, and approved by the Institutional Review Board (or Ethics Committee) of Johns Hopkins University School of Medicine (protocol code JHU-IRB00269637 and 3 September 2021.

This work has been accomplished with the support of the Johns Hopkins University School of Medicine Department of Radiology Physician Scientist Incubator Program. 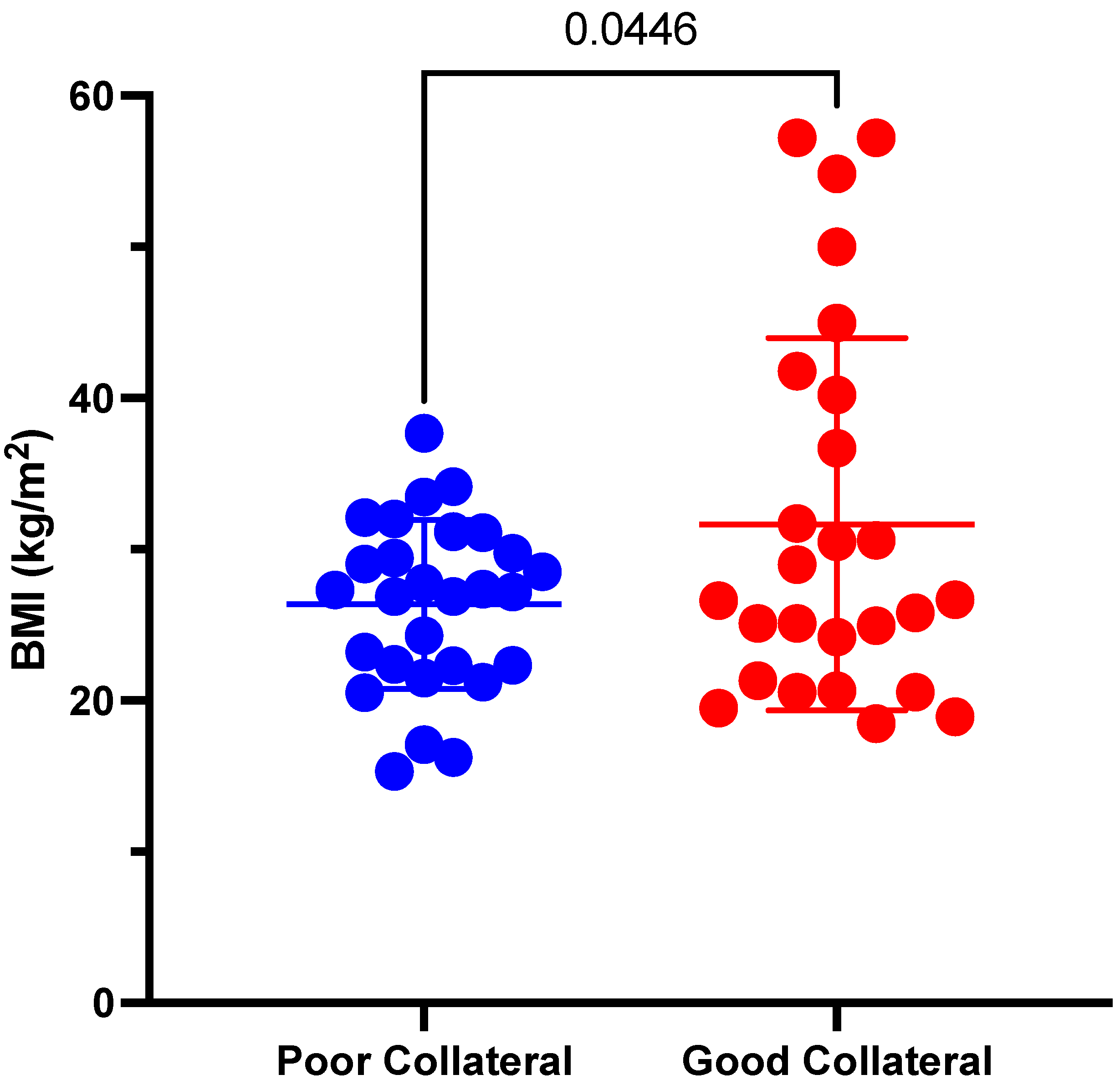