A major concern for cervical epidural injection (CEDI) in patients with neck pain and cervical radiculopathy is the safety and effectiveness of the procedure. Reports of serious complications such as spinal cord injury have led to concerns regarding this procedure’s safety [1,2,3]. Fluoroscopy or computed tomography (CT) guidance aims to reduce the risks of epidural injection, such as dural puncture or spinal cord injury. However, although both guidance approaches improve safety, they cannot completely aid in advancing the tip of the needle into the epidural space, as these approaches cannot visualize the entire intrusion route [2,3,4,5].
It is also important to examine the placement of the needle tip and the spread of the injectant to ensure its effectiveness [6]. The loss-of-resistance (LOR) method is performed for blinded or fluoroscopic epidural injections. However, it is limited by false-positive LOR before the needle enters the epidural space [7,8]. CT guidance uses high radiation exposure to carefully check the needle tip position, which also poses a problem [9]. However, CT cannot image the epidural space without a contrast medium, which can cause adverse effects [10]. Furthermore, CT emits ionizing radiation, which can cause cancer [11].
Sonography offers an alternative method for performing cervical interlaminar epidural steroid injections (CILESIs). It could help reduce the risk of injury, avoid the pitfall of false-positive LOR, and avoid radiation exposure or the use of contrast media by allowing direct visualization of the location of the needle tip during the procedure with cross-sectional imaging [6].
However, the technique for ultrasound (US)-guided CILESIs has not been reported, and no case series has described the safety of this technique in cervical lesions. Herein, we report cases of US-guided CILESIs without fluoroscopy.

This study was performed at the Maeda Orthopedic Clinic and was approved by its institutional review board (Commission of Ethics approval number 00000003).
Patients provided written informed consent for the cervical epidural block and the publication of this report. Overall, nine patients presented to the Maeda Orthopedic Clinic between August 2021 and January 2022. All patients underwent US-guided CEDI for the treatment of neck pain or interscapular radicular pain due to cervical disc herniation, cervical discopathy, cervical canal stenosis, or thoracic disc herniation.

To confirm the accuracy of US-guided CEDI, we chose one patient (case 4) and two other patients (a 78-year-old male patient with cervical canal stenosis (Supplementary Materials S1) and a 58-year-old female patient with cervical disc herniation (Supplementary Materials S2) who were not included in this case series because they could not be followed up for >2 months). We performed US-guided CEDI at the C4/5 level. We used a contrast medium instead of dexamethasone (3.5 mL iohexol-240 [Omnipaque-240; GE Healthcare Pharma, Tokyo, Japan]) in 3.5 mL of 0.25% lidocaine. Immediately after injection of the contrast medium, anterior–posterior and lateral epidurograms of the cervical spine were captured. Subsequently, the patients were placed in the prone position within the gantry of the CT scanner (Aquilion Start Canon medical system, Tochigi, Japan) and CT was performed from C1 to L1 5 min after injection. The two orthopedic surgeons and the author have 32, 38, and 24 years of experience, respectively. Technical success was determined by reviewing CT epidurograms for the presence of epidural contrast. The spread of contrast within the epidural space was also assessed on CT epidurograms.

Pain intensity was evaluated using the visual analog scale (VAS). All patients were instructed on how to use the VAS prior to the cervical epidural block (0, no pain; 10, worst pain conceivable). Before the procedure, an interventional orthopedic doctor questioned the patients regarding their baseline VAS scores for pain. The patients were discharged on the day of the procedure and asked to revisit 1 week and 2 months later for evaluation of side effects and pain scores, respectively. If the pain persisted, we treated patients with an additional block and rechecked their pain scores.

Functional ability was evaluated using the neck disability index (NDI). The NDI is a 10-item self-administered disease-specific questionnaire that evaluates the impact of neck pain on a patient’s daily life and the corresponding disability. The questionnaire scores range from 0 to 50; the higher the score, the greater the disability. The validity and reliability of this scale have been previously established [12].
Symptom improvement was assessed before and 2 months after the injection using the VAS and the Japanese version of the NDI. Any potential complications, including headache, increased neck pain, or stiffness, were monitored. Moreover, functional ability was rechecked in patients treated with an additional block.
Patients were asked about their opioid consumption, any additional cervical spine injections, and progression to surgery during the follow up period, and the answers were documented in their profile.

During the study period, nine participants with radicular pain underwent US-guided CEDI. The radicular pain in one, two, three, and three patients was caused by thoracic disc herniation, cervical disc herniation, cervical discopathy, and cervical canal stenosis, respectively. These patients were followed up from 60 to 348 days after the procedure. Their baseline data are presented in Table 1. The baseline and demographic characteristics of the patients were recorded, and the mean age of patients was 51.2 years (range, 23–74 years). Six participants were men and three were women. The mean body mass index was 24.2 km/m2 (range, 19.3–31.2 km/m2). At the 2-month follow-up, there were significant reductions in NDI from 44.4 to 15.6 points in Table 2. The mean VAS score of neck pain was 8.3 at before the procedure and 1.8 at the 2-month follow-up in Table 2. Among those who reported having recurrent pain (four patients), no patient used opioids for analgesia, four patients reported receiving additional injections, and no patient underwent surgery. During the follow-up period, one patient was able to discontinue opioids.
Vascular or subdural injections were not confirmed in any of the patients during the procedure. Furthermore, we did not encounter any significant complications, including stroke or persistent neurological deficits, during the procedure or 2-month follow-up. Nausea and general fatigue were observed after epidurography using a contrast media (case 4); however, the symptoms resolved within a day.
CT epidurograms revealed that the procedure was technically successful in all three patients from whom they were obtained, including case 4. The spread of contrast was confirmed from the C2 vertebra level to the Th5 vertebra level according to the axial CT epidurogram.
SMI was performed with a small injection. An appropriate epidural space was detected using SMI after the needle was advanced. The epidural space was then enlarged by means of an additional injection directed to the area where the SMI signal was detected (Figure 4, Video S3).
Video S3. The retrodural space of Okada is gradually enlarged by epidural injection. This lesion is not a true space in the epidural space. The loss-of-resistance method cannot differentiate between the space of Okada and the epidural space.

A 73-year-old woman presented with severe posterior cervical pain and right shoulder pain. The pain did not resolve with the use of medications (an opioid, an anti-inflammatory analgesic, and a muscle relaxant). Magnetic resonance imaging revealed cervical canal stenosis. Her pain persisted for 3 weeks; therefore, US-guided C3/4 interlaminar CEDI of 1 mL dexamethasone (4 mg) and 6 mL 0.25% lidocaine was administered. In the examination room, SMI was used to confirm that the parenteral solution had spread throughout the epidural space. Subsequently, the VAS score decreased from 10 to 5. An additional four blocks were performed for 2 months, and the VAS decreased from 5 to 2.
After 2 months, she experienced exacerbations and remission of symptoms. She received US-guided epidural blocks 20 times in total. We confirmed the 20th US-guided injection using CT epidurography (Figure 6).

A 73-year-old man presented with severe pain in his right shoulder and arm. Radiographs revealed that the patient had severe cervical spondylosis. Considering that severe night pain and insomnia had persisted for 2 weeks, US-guided C5/6 interlaminar CEDI of 1 mL dexamethasone (4 mg) and 6 mL 0.25% lidocaine was administered. Subsequently, the VAS score decreased from 10 to 1. No additional blocks were administered. No recurrence of pain was observed at the 8-month follow-up.

A 23-year-old man presented with severe pain in his right neck and interscapular region. The pain persisted despite diagnostic facet joint blocks (right Th5/6, right C3/4, and right C4/5 facet blocks). Magnetic resonance imaging revealed no vertebral bone injury; however, damage to the C3/4 and C4/5 discs was observed. The pain persisted for 3 months; therefore, US-guided C5/6 interlaminar CEDI of 1 mL dexamethasone (4 mg) and 6 mL 0.25% lidocaine was administered. In the examination room, SMI was used to confirm that the parenteral solution had spread throughout the epidural space. Subsequently, the VAS score decreased from 10 to 1. Two additional blocks were administered over 7 weeks, leading to the resolution of his pain. No recurrence of pain was observed at the 3-month follow-up.

In conclusion, we propose the possible use of US for easier and safer CILESIs compared with conventional methods. US for the direct visualization of CILESIs may allow for safer outpatient injections.

This study was performed at the Maeda Orthopedic Clinic and was approved by its institutional review board (Commission of Ethics), 00000003.

The patients provided written informed consent for a cervical epidural block and the publication of this report.

The data that supports the findings of this study are available in the supplementary material of this article.

The authors appreciate Ichiro Higashiyama for correcting data of CT-epidurography. 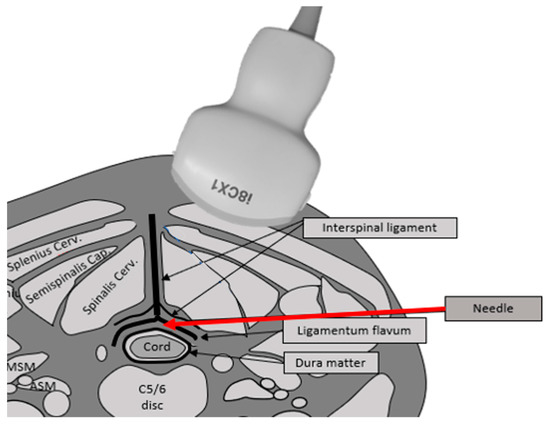 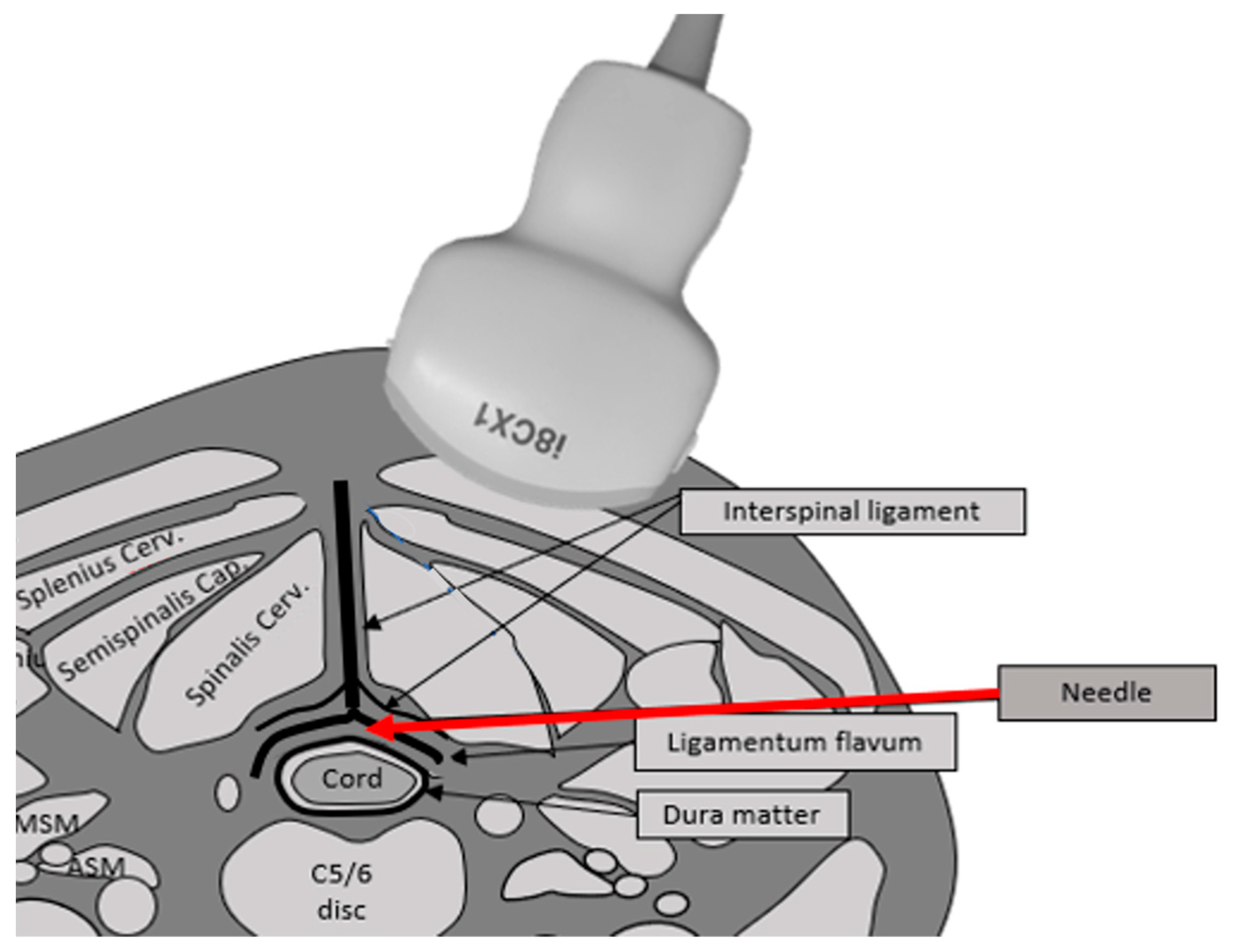 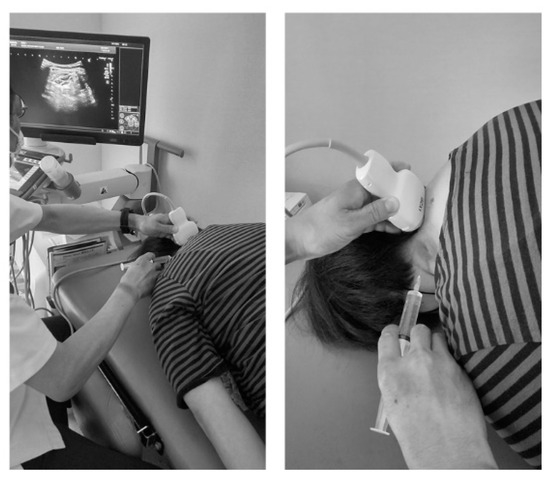 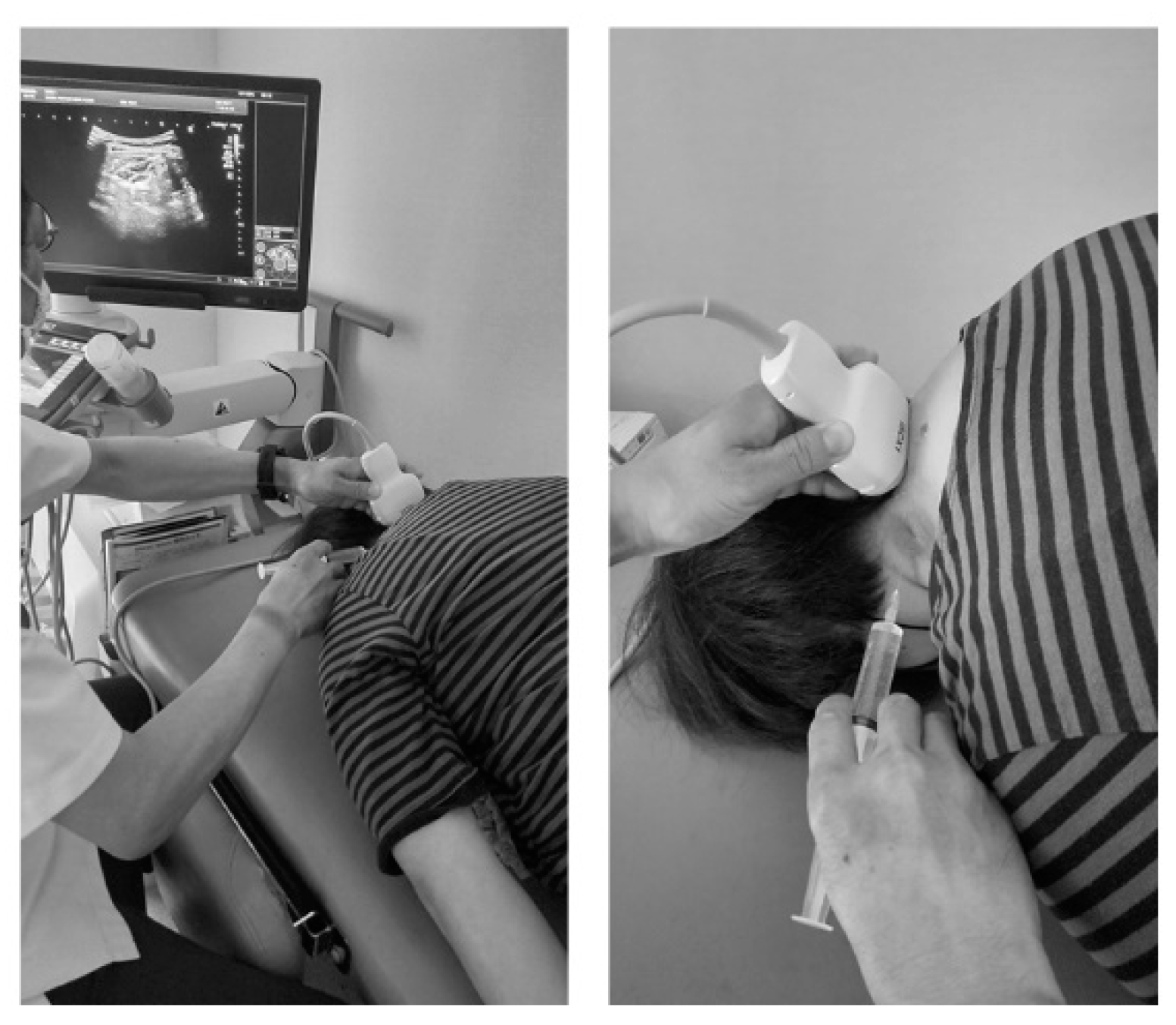 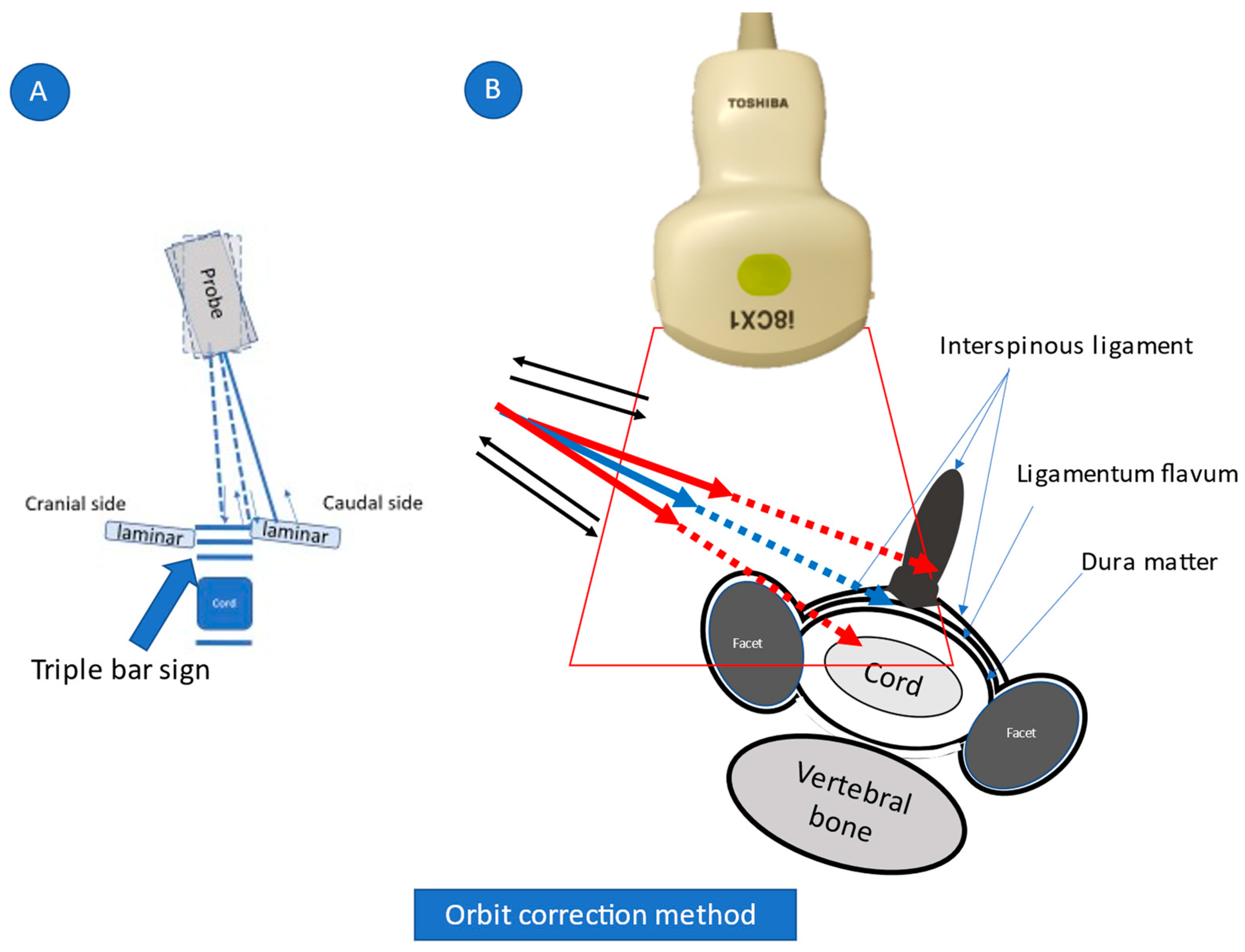 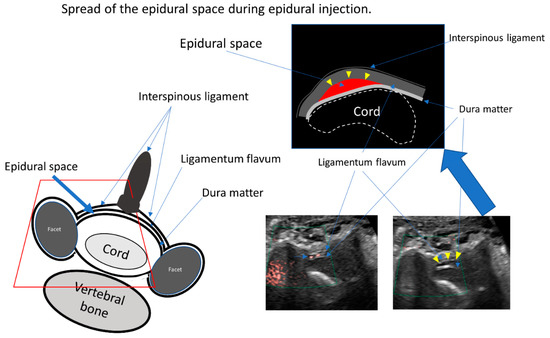 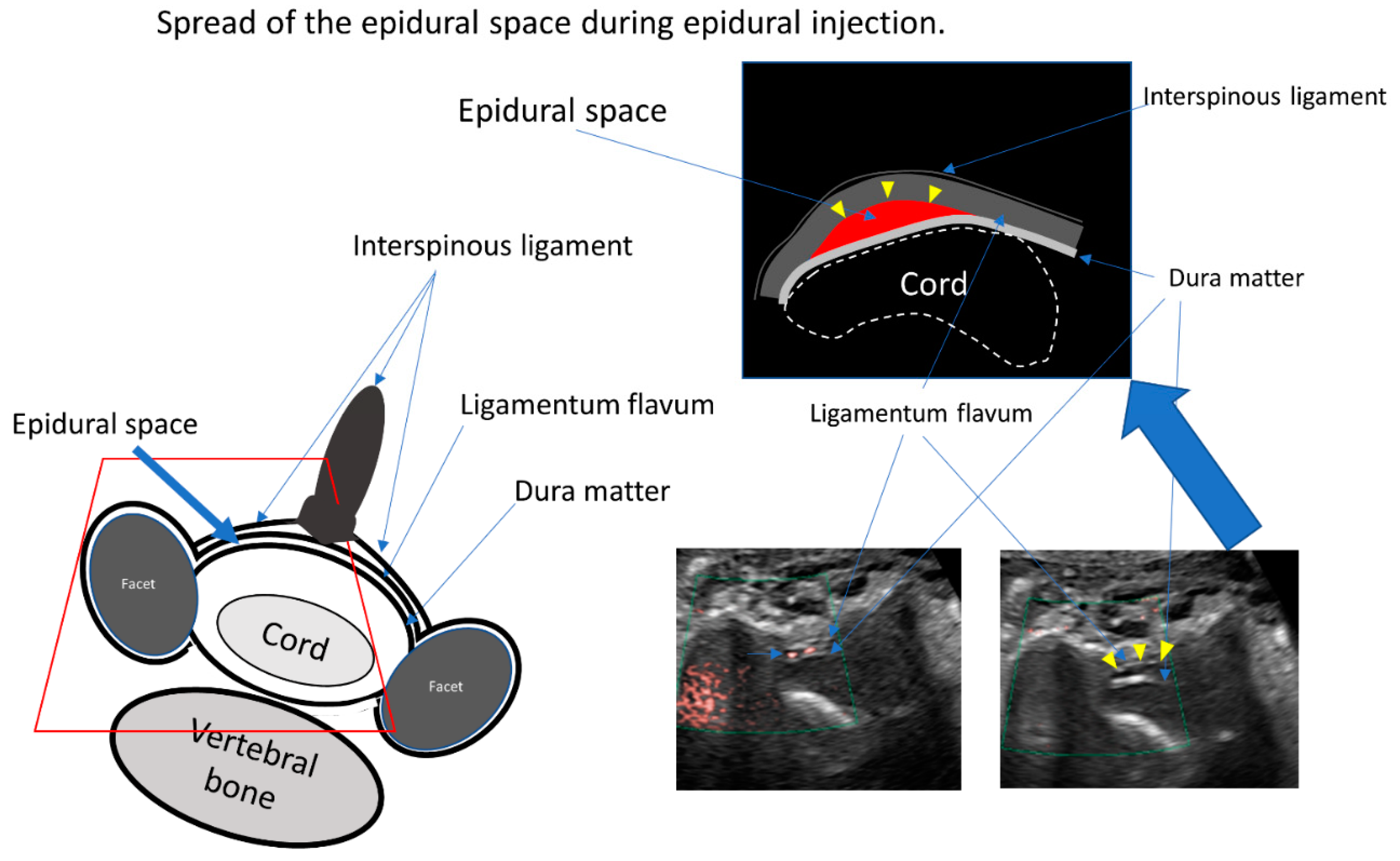 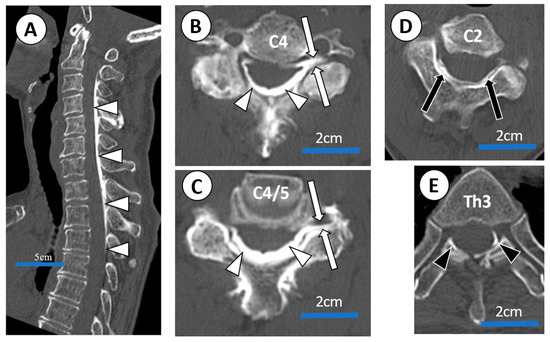 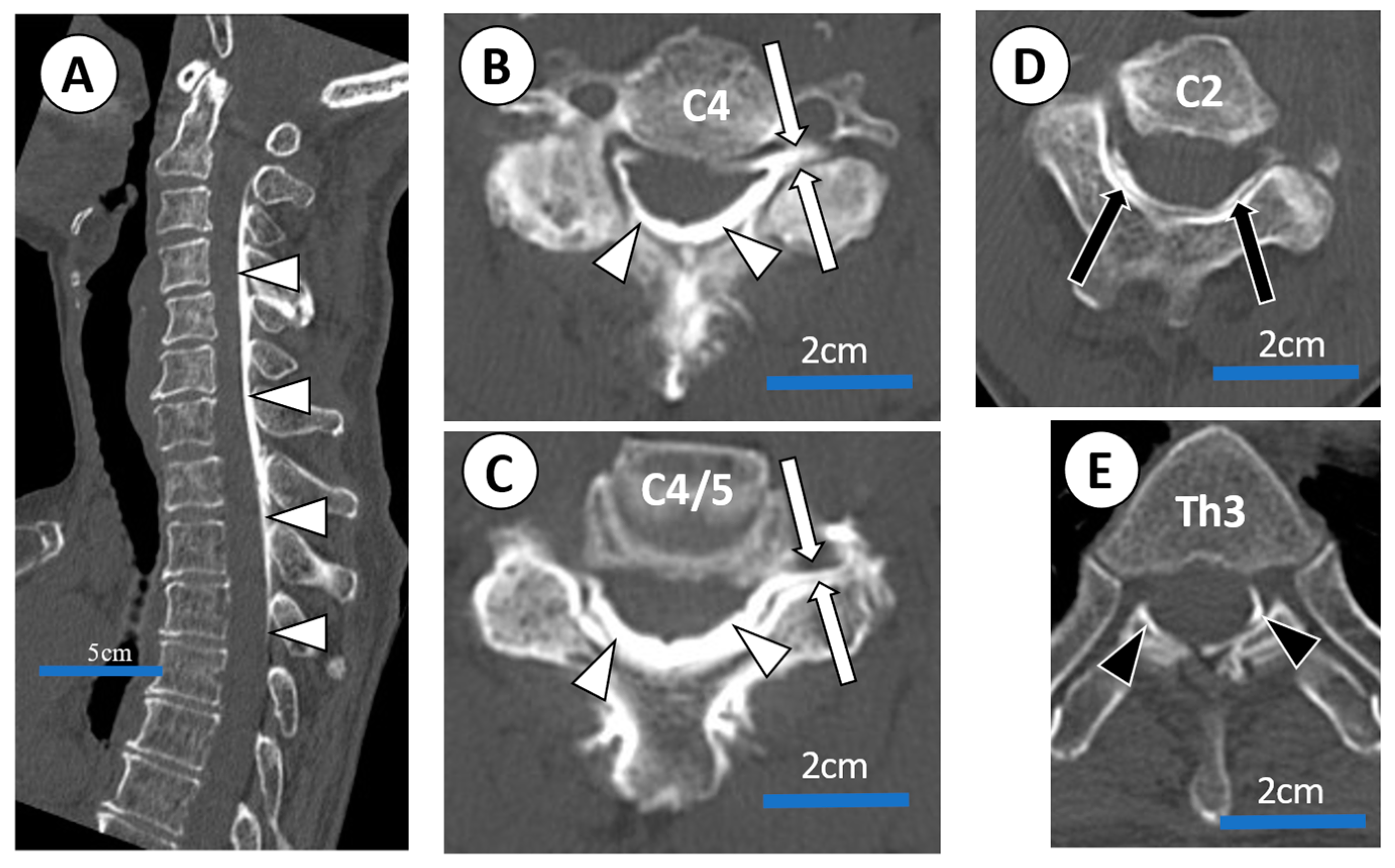 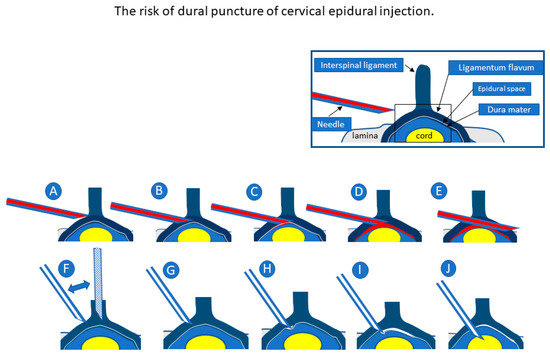 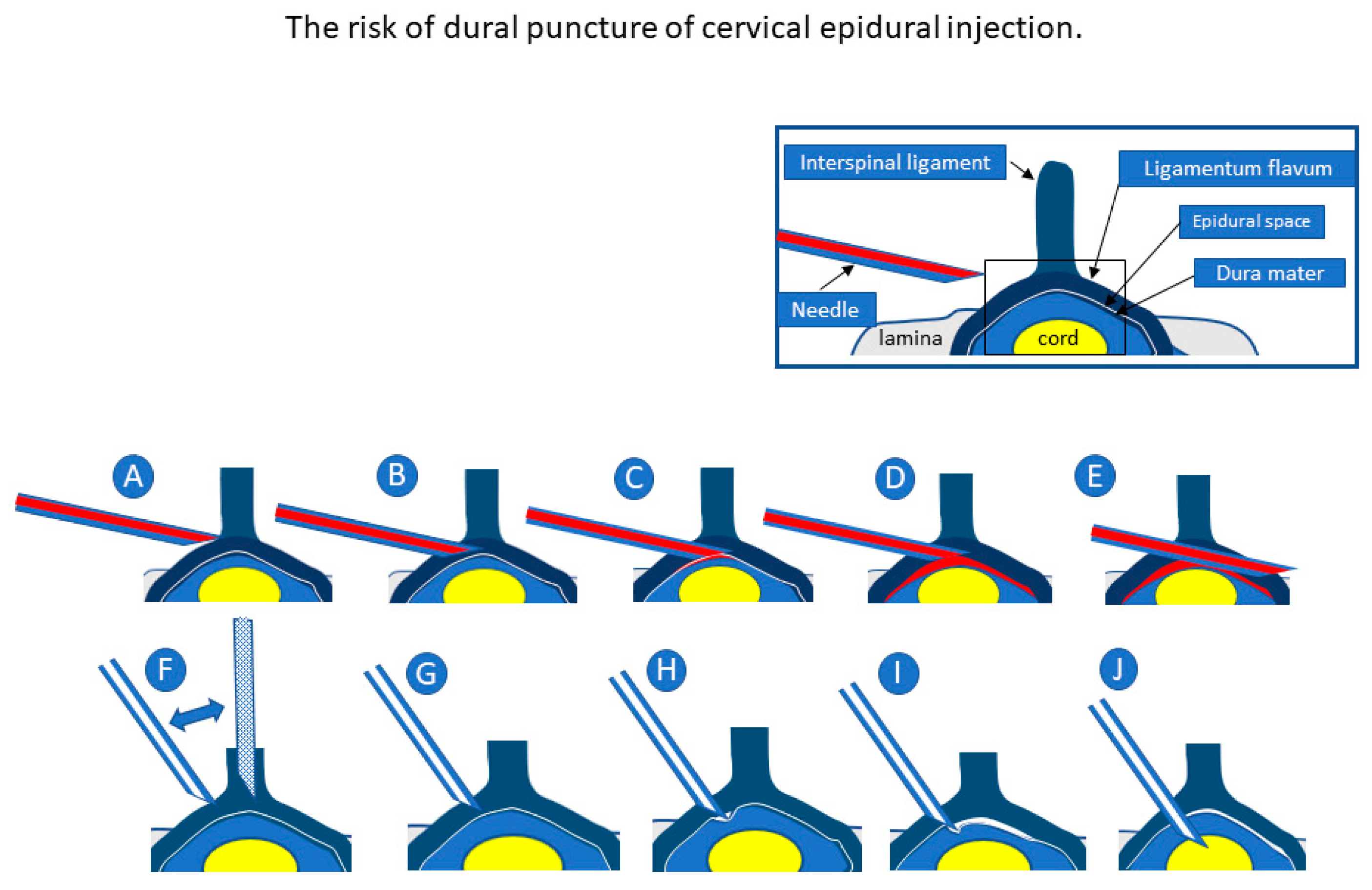