Some biological systems, such as the tree frog, Litoria caerulea, and the bush-cricket, Tettigonia viridissima, have developed the ability to control adhesion by changing the curvature of their pads. Active control systems of adhesion inspired by these biological models can be very attractive for the development of devices with controllable adhesive properties. In this paper, we present a theory describing the adhesive behavior of an artificial system consisting of an inflatable membrane clamped to a metallic cylinder and filled with air. In such a system, by controlling the internal pressure acting on the membrane, it is possible to modulate the adhesive strength. In particular, an increase of the internal pressure and, hence, the curvature of the membrane, results in a decrease of the pull-off force. Results predicted by the theoretical model are in good agreement with experimental data. The model explains the apparent contradictory results observed for the thick membrane with zero curvature. In fact, in this case, large pull-off forces should be expected, but zero values are measured due to an initial small misalignment between indenter and membrane, which is not possible to control with precision during the experiments. The present model might help to achieve a better understanding of the adhesion behavior of biological systems and of the fingertips that, in a broad sense, may be regarded as shell-like structures. View Full-Text
Keywords: adhesion; biomimetics; energy release rate; elastic membranes adhesion; biomimetics; energy release rate; elastic membranes
►▼ Show Figures 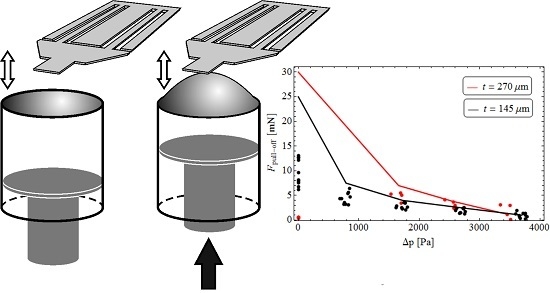