Soil analysis is used to estimate nutrient availability, but nutrient concentrations are not always related to yield in most fruit plants, including grapevines. Thus, additional multivariate mathematical models, such as the compositional nutrient diagnosis (CND), which takes into account leaves nutrient concentration, and yield, can contribute to estimating critical levels or sufficiency bands of elements, as well as to detect deficiency and/or excess of nutrients. The aim of the present study was to establish CND standards, and the critical level and sufficiency band of nutrients, in the grapevine Vitis vinifera L., grown in a subtropical climate region. Leaves were collected in 81 vineyards in the Campanha Gaúcha do Rio Grande do Sul region, Southern Brazil, and analyzed for macro- and micro-nutrient concentration. The yield of each vineyard was assessed. Grapevine nutritional status was calculated through the CND method. CND-r2 indices were effective in establishing the nutritional status of grapevines for macro- and micro-nutrients as sub-optimal, excessive, or balanced. The CND methodology established the critical level and sufficiency bands of nutrients more accurately than the current recommendations for grapevines. Multi-nutrient associations were more effective than the single nutrient determination in defining the threshold of a given nutrient that can reduce grapevine yield.
Keywords: Vitis vinifera L.; mineral nutrition; leaf diagnostic; nutritional balance; yield Vitis vinifera L.; mineral nutrition; leaf diagnostic; nutritional balance; yield

Viticulture is a highly profitable agricultural activity, nevertheless, winegrowers’ financial sustainability depends on good yield and on the high quality of the harvested products. These features are determined by several factors, among them, plant nutritional balance and soil fertilization. Brazilian viticulture applies fertilizers and soil acidity correctives that account for 38% of expenses in crop inputs and for approximately 16% of costs in the total maintenance of producing grapevines (>4 years) [1]. Thus, there is high demand for methodologies to help winegrowers with soil corrective and fertilizer management, to achieve satisfactory grape, must, and wine yield, and quality [2].
Soil analysis is globally used to estimate nutrient availability; the recorded values are mainly related to culture growth and yield parameters [3,4]. However, it is essential carrying out leaf analysis for perennial fruit plants, such as grapevines, rather than soil analysis alone. This is because, compared with annual crops, trees overall record higher dry matter rates, accumulate more nutrients, and occupy a larger volume of soil [5,6]. Accordingly, fruit trees acquire some nutritional stability at the adult phase [7]. Owing to such a stability, the leaf composition diagnosis, allows adjustments of fertilization programs. In grapevines, leaf collection is suggested at full flowering or at berry veraison [8].
The compositional nutrient diagnosis method (CND) takes into account the association between a given nutrient and the geometric means of concentration, on a dry matter basis, recorded for the other nutrients (multivariable relations), including those that are not analytically determined. It is considered as the best way to express balance in plant tissue [9,10]. This technique was developed in Canada [9] and has been applied worldwide to several annual cultures such as beans, maize, rice, soybeans, tomato, and Aloe vera [11,12,13,14,15]. However, the methodology also has a potential high success in forest essences such as eucalyptus [16,17], and in fruit plants such as banana, orange, pear, mango, and guava trees [18,19,20,21]; but, it has not yet been applied to grapevines.
In 2018, Melo and collaborators [22], used the diagnosis and recommendation integrated system (DRIS) to determine normal nutrient ranges in vineyards in Southern Brazil. However, the DRIS values were not associated with yield. Thus, it became mandatory to apply other methods, such as the CND, that are more accurate in estimating normal nutrient ranges in grapevines, in order to find good association with yield. The compositional nutrient diagnosis method generates a correlation factor for any nutrient by adding all essential elements in a multi-nutrient analysis. It also enables attributing the same weight unbalance to deficiencies and excesses; such a factor can be detected by applying the Mahalanobis distance [23]. Besides, the CND methodology has only one standard deviation, and allows identifying and excluding atypical data (outliers), a fact that increases its reliability in result interpretation [18,23,24]. Consequently, this method can be applied to a database set for a single region, to establish an association between grapevine nutritional status and yield.
We hypothesized that it would be possible to generate a range of specific sufficiency for the type of Vitis vinifera grape. The aim of the current study was to use CND standards, to determine the critical level and sufficiency band of nutrients in Vitis vinifera L. grapes.

Twenty-five grapevine leaves were collected in each vineyard in order to have a composite sample. Complete leaves (lamina + petiole) were picked on the opposite side to the first cluster of the fruit shoot at the beginning of the berry ripening (veraison) phase, based on the methodology recommended by CQFS (Comissão de Química e Fertilidade do Solo dos Estados do Rio Grande do Sul e Santa Catarina) [25]. Leaves were washed based on the following sequence: running water, deionized water and neutral detergent (0.1%) solution, deionized water and hydrochloric acid (0.3%) solution, and deionized water. Then, leaves were dried in forced air circulation oven at 60 °C ± 5 °C until constant mass, ground in a Willey type mill, and sieved in 0.841 mm mesh. The total concentrations of Nitrogen (N) were measured after digestion of 0.200 g of plant tissue sample with 2 mL of H2SO4 and 1 mL of H2O2, and progressively heated in a digester block (Tecnal, Micro 42, Piracicaba, Brazil) to 350 °C for 1 h. [26]. Nitrogen was extracted using sulfuric acid digestion and its determination was carried out in a steam Kjeldahl drag distiller (TE-0364, Tecnal, Piracicaba, Brazil) [27]. The concentrations of phosphorus (P), potassium (K), calcium (Ca), magnesium (Mg), copper (Cu), iron (Fe), manganese (Mn), and zinc (Zn) were measured after digestion of 0.250 g of tissue sample with 3 mL of HNO3 and 1 mL of HClO4 and progressively heated in a digester block (Tecnal, Micro 42, Piracicaba, Brazil) to 180 °C for 2 h [28]. In the extract, the concentrations of Ca, Mg, Cu, Zn, Fe, and Mn were determined by atomic absorption spectrophotometer (AAS; Perkin Elmer, Waltham, MA, USA, AAnalyst 200) [29]. The P concentration was determined through colorimetry, based on the methodology described by Murphy & Riley [30], in a spectrophotometer (SF325NM, Bel Engineering, Monza, Italy). The K concentration in the digested extract was determined in a flame photometer (B262 Micronal, São Paulo, Brazil). Finally, the concentration of boron (B) in the leaves was determined by burning 0.5 g of sample plant tissue in the muffle furnace (600 °C for 1 h). After cooling, we added 10 mL of 0.18M H2SO4, shook intermittently for 1 h, and let decant for 3 h. After, we removed 4 mL of the supernatant and added 4 mL of azomethine-H buffer, and performed the determination at 435 nm in a spectrophotometer (SF325NM, Bel Engineering, Monza, Italy) [31,32].
Yield was recorded from 20 grapevines, from each vineyard, by collecting all clusters at grape ripening, and weighing them.

Gross data were collected in the real space between (−) infinite and (+) infinite. On the other hand, compositional data were strictly positive and provided relative information [33]. Leaf tissue compositional analysis is considered a 100% closed system, formed by known nutrients (N, P, K, etc.) and by unknown nutrients (other non-determined elements, carbohydrates, etc.) gathered in a term called R. This process forms an arrangement of d-dimensional nutrients; in other words, a simplex (Sd) deriving from the ratios of d+1 nutrients, with includes d elements and residual value (Rd) (Equation (1)): wherein, N, P, K are the ratios of nutrients determined in the dry matter and Rd is calculated through difference (Equation (2)):
Nutrient ratios were turned into scale-invariant after they were divided through geometric mean (G) of d + 1 components, including [34] (Equation (3)):
Defining new variables (V) that undergo centered logarithmic transformation (natural or Neperian logarithm) is the way to express each simplex component in comparison to all others (interaction study), i.e., in comparison to the geometric mean of the observed values (Equation (4)): and, for definition (Equation (5)),
Thus, only one standard deviation was taken into account, so a single relative position of each nutrient was found in relation to all others. The access to recent multivariate analysis instruments, such as the principal component analysis and the compositional analysis, was used as the leverage of variables VX.
The following step divided the database into two subpopulations (high and low yield) by using the Cate–Nelson procedure, since observations were classified in decreasing yield order. Khiari et al. [35] elucidated all the procedures used to establish the reference population.
Compositional nutrient diagnosis standards use means and standard deviations, that correspond to the VX relations of centered logarithmic transformation of d nutrients of high-yield specimens, i.e.,. and , respectively. The CND indices for d elements were calculated (Equation (6)): wherein, and, are the mean and standard deviation of the X element in the high-yield subpopulation and is the CND index of the X element.
Independence between data is ensured by centered logarithmic transformation [33]. The CND indices were normalized and variables were made linear as dimensions in a circle (d + 1 = 2), in a sphere (d + 1 = 3), or in a big sphere (d + 1 > 3), in a dimensional space of d +1. The nutritional unbalance index was distributed as variable, if the CND indices were independently reduced variables (Equation (7)):
The r radius is computed in the CND nutrient index to feature each sample based on the global imbalance CND-r2.
Thus, 18 atypical results were excluded from the study (outliers) through Mahalanobis distance (D2) [23], applied to the database; 63 observations remained in the sample, they represented yield variation ranging from 22 to 0.4 t ha−1 (mean of 16 t ha−1 and standard deviation of 4 t ha−1). When calculating the Mahalanobis distance, the nutrient imbalance present in the reference population of the culture is dimensioned, allowing the identification of possible outliers before proceeding with the classification of the CND indices [23]. Gaussian data distribution (n = 63) was carried out prior to the analysis, as described by Hair et al. [36]. The normal distribution was taken into account for yield, as well as for the assessed nutrients by accepting Ho; in other words, data with normal distribution.
In order to find the sufficiency band of each nutrient, after the nutrient index (In) = 0 (break-even point = BP) was equated, (BPIn0) was added with (BPIn0) 2/3 of the standard deviation of nutrient contents in the reference population [37,38]. The critical level corresponds to the BP of the sufficiency ranges.
The limitation order was found based on the arithmetic average of the low-yield population indices recorded for each nutrient.
Statistical analyses were carried out in R software [39]. 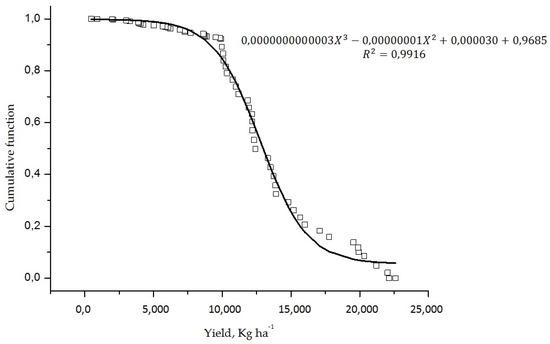 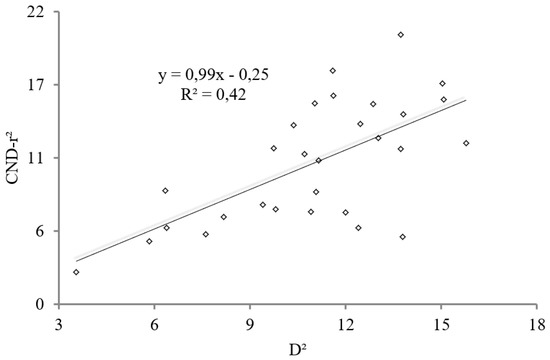 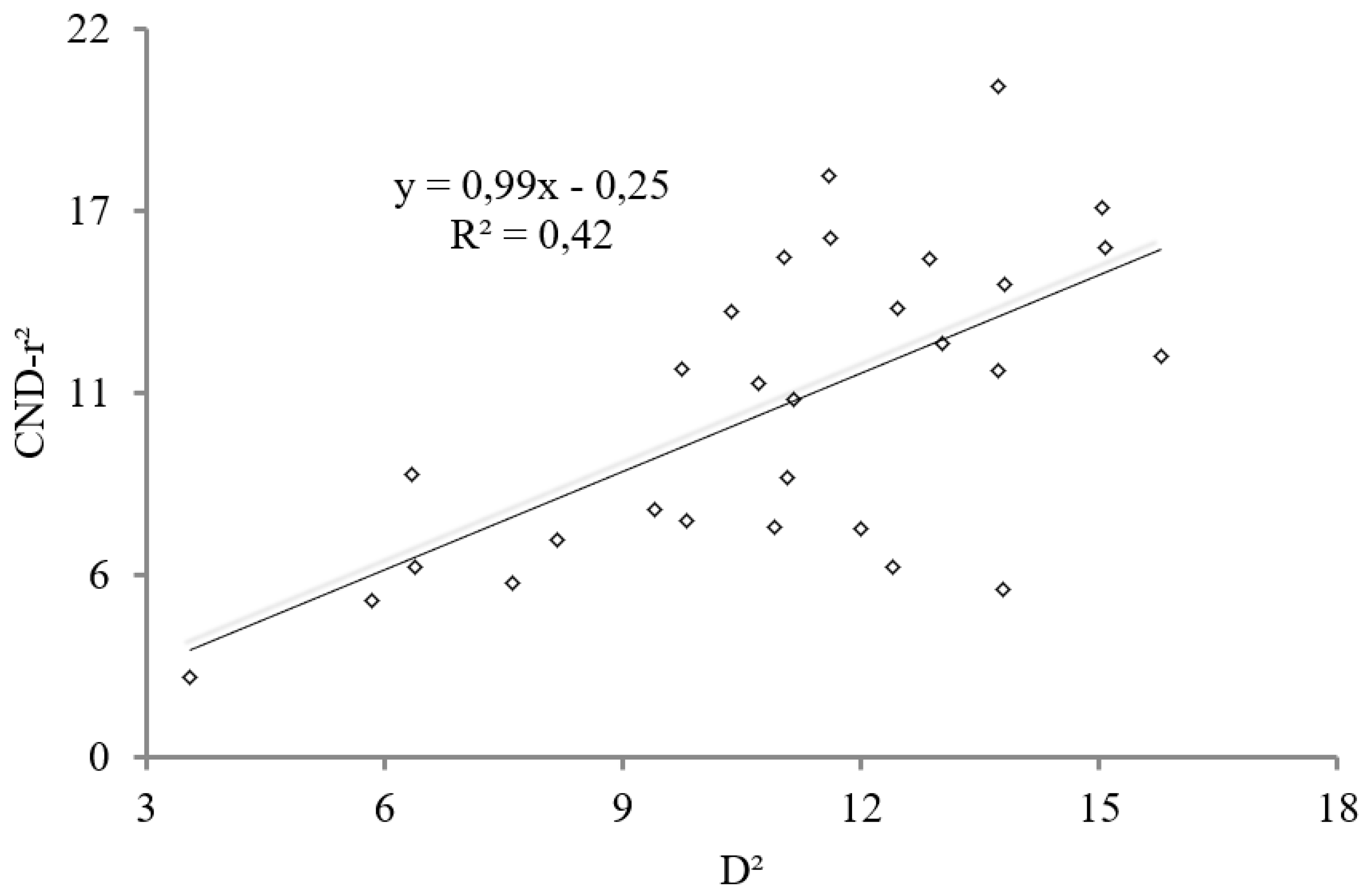