The color of petals of flowering plants is often determined by comparing one or more of the petals to various Royal Horticultural Society (RHS) Colour Chart cards until a color match is found. However, these cards are susceptible to fading with age and can also provide inaccurate results if lighting is not optimal. The cards also rely on the human eye to determine a match, which introduces the possibility of human error. The objectives of this study were to determine camellia (Camellia japonica L.) petal color using the RHS Colour Chart, to determine camellia petal color with the NixTM Pro color sensor (Nix Sensor Ltd., Hamilton, Ontario, Canada), and to compare these measurements using different color measuring approaches. Color measurements of camellia flower petals using the NixTM Pro color sensor were compared to published CIELAB values from the Royal Horticultural Society (RHS) Colour Chart. Forty-five petal color samples were collected from fifteen different camellia shrubs. The RHS Colour Chart was used for each of the petals, and the RHS identifications were recorded. Measurements using the NixTM Pro color sensor were compared to RHS-provided CIELAB values that corresponded with the recorded identification for each petal to determine accuracy. The NixTM Pro color sensor’s measurements were also compared to a mean of the values, multiple measurements on the same petal location, and multiple measurements on different petal locations to determine precision and variation. The Nix™ Pro color sensor’s readings were precise in petal color determination and provided more nuanced differences between petals of the same plant and plants of the same variety in each of the color categories. The RHS Colour Chart provided an accurate depiction of most petals, but it was difficult to use with petals that had wide color variation over the entire petal. The Nix™ Pro color sensor’s measurements appeared to have more variation in the b* color space. However, overall, the Nix™ Pro color sensor L*, a*, and b* values were highly correlated with the provided RHS values (p < 0.01), showing that the sensor can be used as an accurate and precise substitute for the RHS Colour Chart. The Nix™ Pro color sensor can be a useful, cost-effective tool to measure the petal color of camellia and other flowering plants and rectifies many of the problems associated with the RHS Colour Chart.
Keywords: flower; pigment; plant; Royal Horticultural Society (RHS); reflective sensing; remote sensing flower; pigment; plant; Royal Horticultural Society (RHS); reflective sensing; remote sensing

As explained in more detail by Stiglitz et al. [15], the NixTM Pro Color Sensor has its own light-emitting diode light source and is controlled through a Bluetooth-connected mobile device. The sensor can output results in a variety of different color systems, including RGB, CMYK, and CIE L*a*b*. The NixTM Pro Color Sensor is rechargeable, easily accessible because of its small size, can be recalibrated easily, and is relatively inexpensive (~$350). Data were collected during March of 2020 over several days to assure sampling uniformity among the various camellia shrubs, using steps outlined in the data collection flowchart (Figure 2). Figure 2 describes the general process behind the data collection, as well as the ways in which precision, variation, and accuracy were measured. For accuracy comparison, RHS provided CIELAB values for each of the color card identifications used in comparison to the Nix™ Pro color sensor readings [21].
The first task was to find a camellia shrub that was in bloom yet had many fresh flowers. Shrubs that were at the end of their blooming cycle or which had browning flowers were avoided. Once a suitable shrub was found, a petal was removed from three different flowers on the same shrub to mitigate color variation between flowers. The petals were then placed on their respective identification number—either 1, 2, or 3 (for categorizing results)—on a white cardboard backing (Figure 3a,b). The RHS fan decks were compared to each petal by the researcher until a match, or the closest color, was found and then recorded (Figure 3a).
The color matching was performed in non-direct sunlight during mid-day to prevent any color skewing by the lighting conditions. Furthermore, a second researcher confirmed each of the RHS measurements as the closest color match to each petal’s color. After the three RHS measurements were recorded, the Nix™ Pro color sensor was used on each of the petals and the results were also recorded (Figure 3b). This process was repeated for five white, five red, and five pink camellia shrubs, with a total of 45 different petals being measured with both the RHS and Nix™ Pro color sensor. Table 1 outlines the specific varieties that were sampled, according to their respective color category of white, pink, or red, and Table 2 provides RHS color identifications for each of the three petals for each variety.

Packages Lattice and GGplot2 within R Studio were used for the data analyses and graphs [23]. Lattice was used to produce some of the figures instead of GGplot2 due to its ability to easily incorporate multiple sets of data within a single graph [24]. However, GGplot2 was used to calculate p-values and R-squared values due to its ability to quickly provide a wide range of calculations [25]. GGplot2 was used to create figures, as well as for the analyses. All of the tables were created in Microsoft Excel, and the table statistics were also calculated in Microsoft Excel.

Precision of the Nix™ Pro color sensor was determined by comparing the individual values of L*, a*, and b* to their respective mean values (Figure 5). For the L* values, among the different data sets, the lowest R-squared value was 0.9938, indicating a low variation between the three L* value data sets and the mean (Figure 5a). For the a* values, the lowest R-squared value was 0.9944, reflecting a low variation between the three a* value sets and the mean (Figure 5b). For the b* values, the lowest R-squared value was 0.9647, suggesting a slightly higher but still low variation between the b* values and their mean (Figure 5c). These high R-squared values signify little difference between the individual measurements and their overall mean, indicating a high overall precision. However, there was slightly higher variation with the b* value (blue to yellow) among measurements, indicating that the color sensor may have a harder time precisely measuring this range. Another measure of precision is the variation between three repeated measurements on the exact same location of the petals (Table 4). The Nix™ Pro color sensor had a very high precision between measurements on the same location, with the highest standard deviation being 0.6 (Table 4).
Camellias in the white category had almost no deviation with a maximum deviation of 0.1. Red and pink also had minimal deviation overall; however, the varieties ’Tiffany’ and ‘Joe Holland’ had a higher L* value deviation of 0.6. This higher standard deviation does not imply a deficiency with the Nix™ Pro color sensor, as later results reflect that these varieties have a higher color variation over their petals.

Nix™ Pro color sensor variation was measured by the standard deviation of readings from three different locations on the same petal (Table 5). Although high, the standard deviation values between the three readings were almost all under 3.0 and most were closer to 1.0. Certain varieties, such as ‘Tiffany’ and ‘Joe Holland’, had a high standard variation of over 6.0, reflecting a higher color variation over the petal. This corresponds to the high standard deviation found for these varieties in the precision section of the results. The final measurement of variation was the difference between different measurements of petals from the same camellia plant (Table 6). Despite readings being taken from separate petals, the standard deviation between petals was quite low when outliers were excluded. Measurements for each variety were within a certain range, demonstrating the Nix™ Pro color sensor’s ability to distinguish variety, even within the same color category, by their L*, a*, b* values. For example, when outliers were excluded, both ‘Show Time’ and ‘Tiffany’ are within the pink category, but ‘Show Time’ had an a* value range (green to red) of 17.3–23.8 and ‘Tiffany’ had an a* value range of 31.9–36.9 (Table 6). Each variety had its own unique green-to-red range, suggesting that varieties could be distinguished by their color range. Overall, the Nix™ Pro color sensor had high precision, with high R-squared values and relatively low standard deviations.

The technology used to measure plant color has undergone various stages of applications in horticulture. For example, an inexpensive Epson document scanner was previously used to accurately estimate leaf color [26]. The process used a combination of color and contrast to determine the amount of chlorophyll within a leaf [26]. When compared to a lab spectrophotometer, linear regressions between the readings were significant, at p < 0.05 [26]. However, the procedure to reach these results was laborious, requiring 43 individual steps [26]. Digital and smartphone cameras were evaluated to measure leaf and flower color [27]. Flower and leaf colors were measured repeatedly, and the results were accurate when plant and leaf parts were uniform in color [27]. However, color variations were found between the five cameras tested because of the differences in color sensors [27]. Variations in lighting conditions influenced the reported color values [27].
Consumer-level digital cameras were successfully modified to capture ultraviolet images and to take multiple images of varying wavelengths to provide an accurate depiction of a petal’s color [28]. When compared to an Ocean Optics spectrophotometer equipped with a PX-2 pulsed xenon light source, the digital camera’s results had a high correlation to the Ocean Optic’s readings, highlighting the potential for this new color measuring technology [28]. The main limitations of that study were that it was difficult to standardize lighting conditions and each individual camera had its own specific color profile and space [28]. These digital camera limitations produced results that had a correlation with highly saturated yellow samples, but higher variation in red and green flower petals [28]. That technology required color calibration tools, expensive digital cameras, and multiple filters and ultraviolet camera modifications in order to produce accurate color results [28].
This study utilized the Nix™ Pro color sensor, which uses a standardized light source and is factory calibrated to accurately report object color by utilizing red, blue, and green filters, with a design which has the ability to block out exterior light [29]. This represents a readily adoptable technology, compared to the earlier attempts to use digital cameras and scanners. The Nix™ Pro color sensor is portable, accurate, and low-cost, and may represent an accessible innovation to standardize horticultural petal color measurements. Applications of sensor technology in plant color determination is critical for herbarium collections, landscaping, agriculture (e.g., mineral deficiencies in plants, chlorosis etc.) and other applications [30,31,32].

The authors would like to thank the South Carolina Botanical Gardens for their camellia collection. 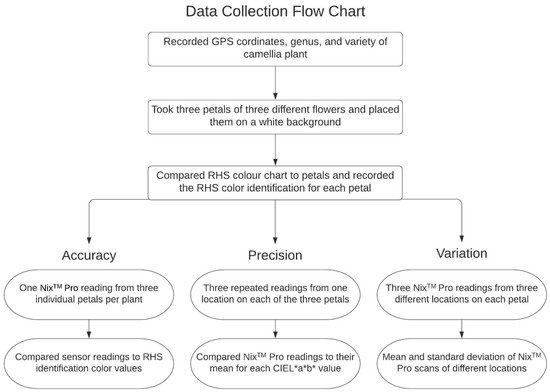 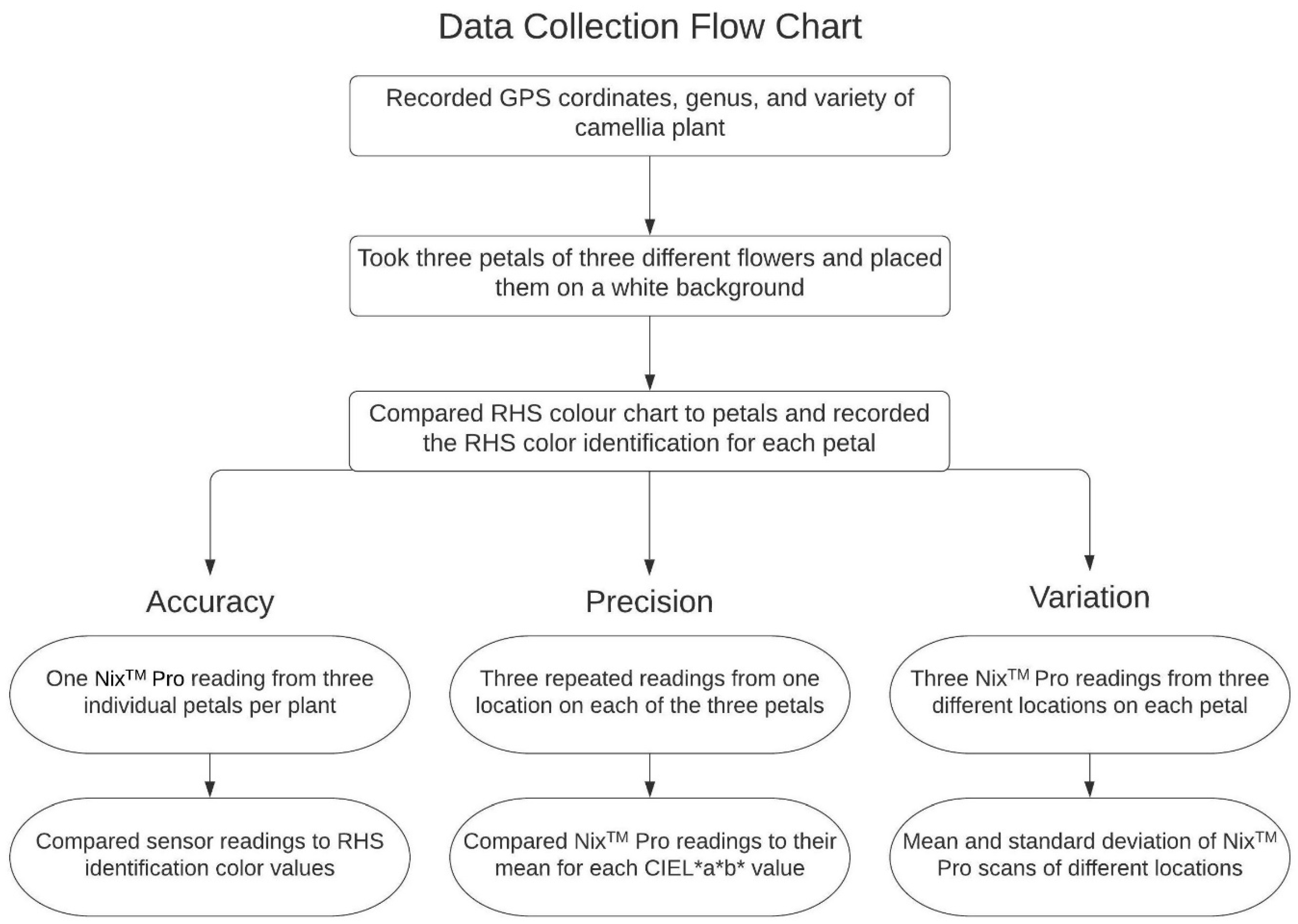