The summertime flowers of the ever-flowering Meiwa kumquat (Fortunella crassifolia Swingle) are the most useful for fruit production in Japan; however, summertime flowers bloom in three or four successive waves at approximately 10 day intervals, resulting in fruit of different maturity occurring on the same tree. Soil water deficit (SWD) treatment has been shown to reduce the flowering frequency and improve harvest efficiency; therefore, in this study, the effects of SWD treatment on the accumulation of soluble sugars in each tree organ above-ground were examined and it was discussed how SWD affects the whole-tree water relations and sugar accumulation by osmoregulation. The number of first-flush summertime flowers was higher in SWD-treated trees than non-treated control (CONT) trees (177.0 and 58.0 flowers, respectively), whereas the second- and third-flush flowers were only observed in CONT trees. The soluble sugar content was higher in SWD treated trees than CONT trees for all organs and tended to be higher in current-year organs than previous-year organs; however, when the sugar content of the current-year spring stems exceeded approximately 100 mg g−1 dry weight, the current-year leaf water potential decreased sharply and the rate of increase in the number of first-flush flowers also tended to decrease. SWD treatment significantly increased the total sugar content of the xylem tissue of the scaffold branches to three times the value in CONT trees (p = 0.001); however, the increase was observed even in sucrose, a disaccharide, similar to that in monosaccharides such as glucose and fructose. These results suggest that the increased sugar levels in the xylem tissue resulted from not only osmoregulation but also other factors as well; therefore, these sugars may affect whole-tree water relations as well as the development of flower buds.
Keywords: osmoregulation; sugar accumulation; water stress; xylem tissue osmoregulation; sugar accumulation; water stress; xylem tissue

Meiwa kumquat (Fortunella crassifolia Swingle) is an ever-flowering tree that usually blooms in spring (April), summer (June to August), and autumn (September) in Japan. The spring flowers appear on the previous year shoots, but are very few in number and not usually used for fruit production. By contrast, the summertime flowers appear on each axil of the current spring shoots that emerge around May and are the most useful for fruit production [1]; therefore, the flower bud differentiation period of the summertime flowers is regarded as approximately 1 month from the termination of spring shoot elongation to flowering [2]; however, the flowering of summertime flowers is divided into three to four separate time points, and when flowers do not bear fruitlets, new flowers appear at the same axil after 10–14 days. The resulting flowers are known as the first-, second-, and third-flush flowers in Japanese production areas [1,3]. The fruits from first-flush flowers tend to grow well and mature early. The fruit quality also tends to be good in first-flush flowers. Since there are few first-flush flowers—the number of first-flush flowers also varies annually—the second-flush flowers are used for fruit production in general [1].
Many previous studies on Meiwa kumquat have shown that the application of a soil water deficit (SWD) for 2–4 weeks during the flower bud differentiation period increases the number of first-flush flowers [4,5,6,7,8,9,10,11]; however, the optimal duration of SWD treatment and its effectiveness varies between years. Iwasaki et al. [7] found that severe drought stress that reduced the predawn leaf water potential to below −1.7 MPa or increased the leaf abscisic acid (ABA) content to above 5 nmol g−1 dry weight (DW) did not increase the number of first-flush flowers, suggesting that the leaf water potential needs to be maintained between 0 and −1.7 MPa; however, this condition is difficult to achieve because the leaf water potential fluctuates not only with soil water content but also with the relative humidity of the atmosphere [6,11].
Iwasaki and Hiratsuka [8] reported that the leaf water potential tends to be lower in Meiwa kumquat trees with larger trunk and scaffold branches under drought conditions. They also noted that transpiration from the trunk surface does not change despite rapid decreases in leaf transpiration under drought conditions, resulting in continuous water loss from the trunk at approximately one-sixth of the leaf transpiration rate. In some woody species, water stored in the trunk is transported to organs such as the leaves when required, but this process does not occur in isohydric plants [12,13,14]. Isohydric plants maintain a constant midday leaf water potential under both abundant water and drought conditions by reducing stomatal conductance to limit transpiration when required [14,15]. Thus, the kumquat tree is considered isohydric because SDW treatment rapidly decreases the transpiration rate in the leaves [9], and the water stored in the trunk does not migrate to the leaves. Plants that have encountered drought actively accumulate soluble sugars and free amino acids to prevent cell dehydration, via a process known as osmoregulation [16]. Thus the migration of water between the organs within a tree may be related to the amount of soluble sugars that have accumulated in that organ.
In the present study, the accumulation of soluble sugars in the organs of Meiwa kumquat trees under SWD treatment was investigated and considered the relationship between the sugar content of each organ and the number of first-flush flowers.

Six eighteen-year-old Meiwa kumquat trees that had been grafted onto trifoliate orange [Poncirus trifiliata (L.) Raf.] were used in the experiment, which was carried out during the growing season in 2016. The trees were planted in 29-L non-woven fabric pots containing commercially available humus-rich soil and each tree had a height and canopy diameter of approximately 1.2 and 1.5 m, respectively. Bud burst and elongation of spring shoots began around 25 April 2016, and were completed around 20 May 2016.
Three trees were allocated to each of the SWD treatment and non-treated control (CONT) groups on June 4 and maintained for 12 days in a greenhouse at Meiji University (Kawasaki, Kanagawa, Japan; 35°61′ N, 139°55′ E). For the SWD treatment, the soil water content was reduced by withholding irrigation, and a small volume of water (approximately 300 mL) was applied when the soil water content fell to <15%. During the treatment, the soil water content was monitored at a depth of approximately 10 cm between the trunk and the pot rim using an ECH2O soil moisture sensor (EC-5) with an Em50 digital data logger (METER Group, Inc., Pullman, WA, USA). The leaf water potential was determined on June 8, 11, and 14 using a psychrometer (WP4-T; METER Group, Inc., Pullman, WA, USA) to monitor the severity of water stress in the trees. One matured leaf in the middle of two current shoots per tree was collected at 9:00 a.m. on each measurement day.

2.2. Observation of Flowering Behavior and Determination of Total Soluble Sugars and Starch

Ten current-year spring shoots of approximately 10 cm length were selected from each tree to observe flowering behavior. The number of flowers that opened on each shoot was recorded each day from 20 June to 31 July, and the number of first-flush flowers and the total number of flowers per 10 shoots per tree was counted. One scaffold branch per tree was harvested on 15 July at the end of SWD treatment, and the plant parts were categorized into current-year spring leaves (current leaves), current-year spring stems (current stems), previous-year leaves (previous leaves), previous-year stems (previous stems), and scaffold branch, which included branches >2 years old. The scaffold branch was then further divided into bark and wood (xylem tissue). The fresh weight of each organ was measured, following which the organs were stored at −70 °C for further analysis. To analyze the soluble sugar and starch contents of the organs, the samples were freeze-dried and ground to powder. Soluble sugars were then extracted by adding 0.1 g of dried sample to 50 mL of 80% ethanol and leaving for 24 h at room temperature, following which the ethanol was removed from the extract using a rotary evaporator (N-1000; Tokyo Rika Kikai Co., Tokyo, Japan) at 35 °C and the remaining aqueous phase was diluted to 50 mL. The total sugar content in 1 mL of the diluted sample was then determined using the anthrone method. The starch content of the organs was determined with the starch-iodine colorimetric method [17] using the alcohol-insoluble solids (AIS) that were obtained during sugar extraction. The soluble sugar and starch contents of each plant part were expressed as mg g−1 dry weight (DW). The water content (WC) of each plant part was calculated as WC = (FW − DW)/FW where FW is the fresh weight.

2.3. Sugar Composition of the Xylem Tissue and Bark Extracts of the Scaffold Branch

Following the extraction of sugars from each dried sample as described above, the aqueous phase that remained after ethanol removal was lyophilized. The residue was then dissolved in 2 mL of ultrapure water to prepare an analytical sample, which was filtered using a 0.45 μm membrane filter before being injected into a high-performance liquid chromatography (HPLC) system (LC-2000Plus series, JASCO, Tokyo, Japan). Sugars were separated in a Shodex SC1011 column (Shodex SC1011; Showa Denko K.K., Tokyo) that was maintained at 80 °C using ultrapure water as the mobile phase with a flow rate of 1.0 mL min−1. Sucrose, glucose, and fructose were then identified and quantified by comparison with peaks of known standards using a refractive index detector (RI-2031; JASCO, Tokyo, Japan).

Each treatment was performed on three trees (one tree per plot) and differences between the treatments were assessed using t-tests. The differences in sugar and starch content among the organs were compared using the Tukey HSD test; the coefficients of correlation and determination were obtained by regression analysis. Percentage values were arcsine transformed before analysis. Differences between the means were analyzed using the software KaleidaGraph v.4.5 (Synergy Software, Reading, PA, USA) when ANOVA was significant at p = 0.05 or p = 0.01, whereas BellCurve for Excel, v.2.00 (Social Survey Research Information Co., Ltd. Tokyo, Japan) was used for regression analysis.

3.1. Changes in the Soil Water Content and Leaf Water Potential during SWD Treatment

3.3. Effects of SWD Treatment on the Soluble Sugar, Starch and Water Contents of the Plant Parts

The number of first-flush flowers was positively correlated with the sugar content in each tree organ, but significantly negatively correlated with the water potential of the current leaves (Table 4). For both relationships, the correlation coefficients were highest in the current stems (p = 0.01), however, when the sugar content of the current stems exceeded approximately 100 mg g−1 DW, the current leaf water potential rapidly decreased while the number of first-flush flowers plateaued (Figure 3). 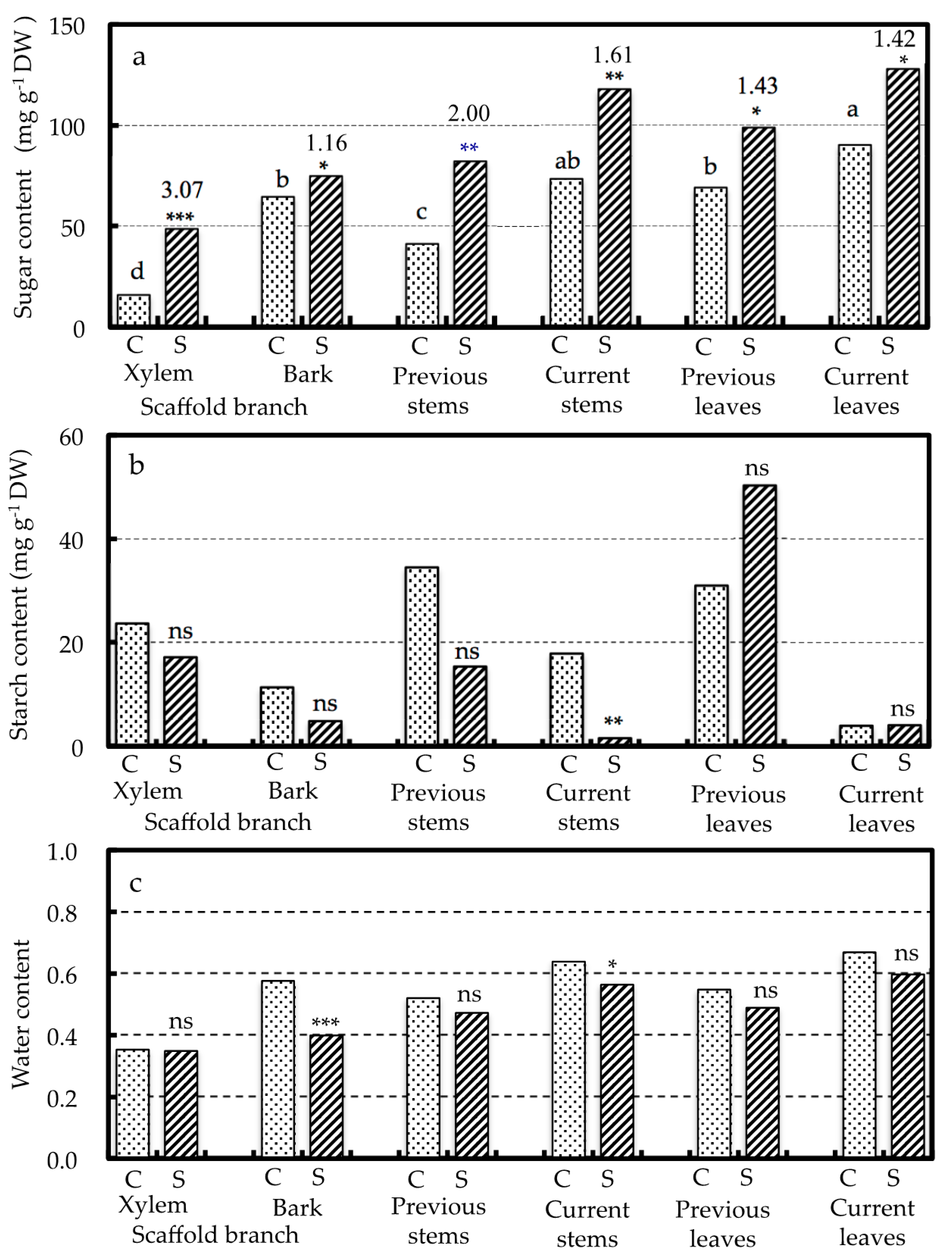 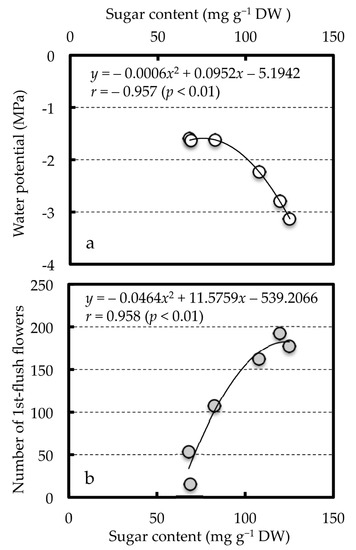 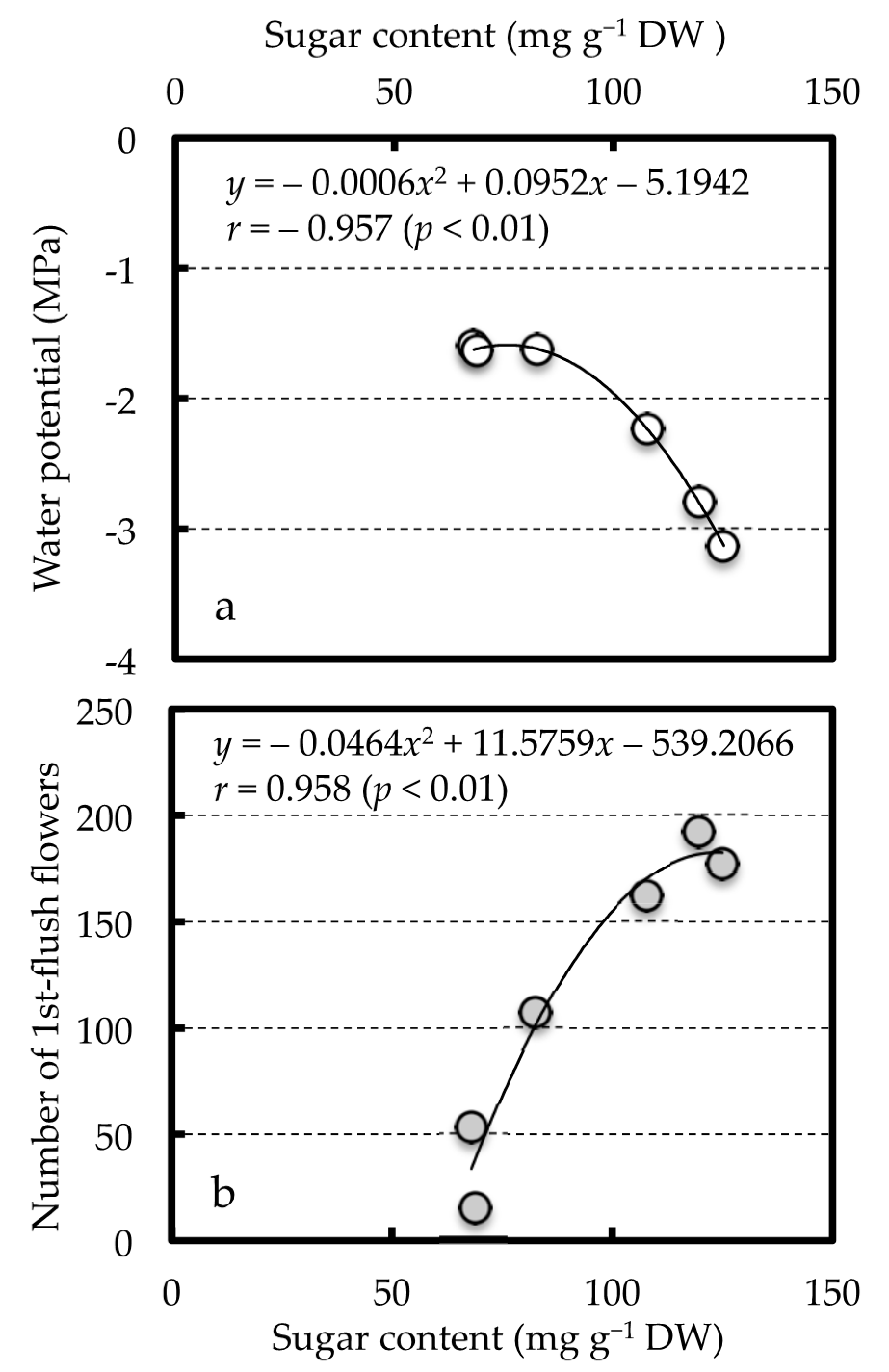