A-kinase anchoring proteins (AKAPs) belong to a family of scaffolding proteins that bind to protein kinase A (PKA) by definition and a variety of crucial proteins, including kinases, phosphatases, and phosphodiesterases. By scaffolding these proteins together, AKAPs build a “signalosome” at specific subcellular locations and compartmentalize PKA signaling. Thus, AKAPs are important for signal transduction after upstream activation of receptors ensuring accuracy and precision of intracellular PKA-dependent signaling pathways. Since their discovery in the 1980s, AKAPs have been studied extensively in the heart and have been proven essential in mediating cyclic adenosine monophosphate (cAMP)-PKA signaling. Although expression of AKAPs in the heart is very low, cardiac-specific knock-outs of several AKAPs have a noteworthy cardiac phenotype. Moreover, single nucleotide polymorphisms and genetic mutations in crucial cardiac proteins play a substantial role in the pathophysiology of cardiovascular diseases (CVDs). Despite the significant role of AKAPs in the cardiovascular system, a limited amount of research has focused on the role of genetic polymorphisms and/or mutations in AKAPs in increasing the risk of CVDs. This review attempts to overview the available literature on the polymorphisms/mutations in AKAPs and their effects on human health with a special focus on CVDs. View Full-Text
Keywords: A-kinase anchoring proteins; single nucleotide polymorphisms; genetic mutations; cardiovascular diseases; protein kinase A A-kinase anchoring proteins; single nucleotide polymorphisms; genetic mutations; cardiovascular diseases; protein kinase A
►▼ Show Figures 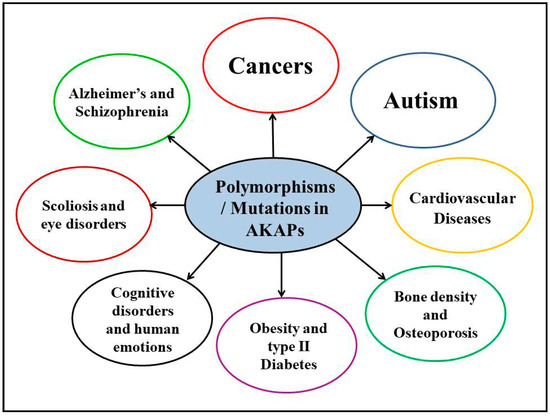