Type 2-diabetes mellitus (T2DM) is a global epidemic that significantly reduces the quality of life of geriatric patients, especially in Western society. The etiology of T2DM is intimately linked to obesity, genetics, and a sedentary lifestyle. Disease manifestations, including blindness and neuropathy, are extremely burdensome, and long-term complications such as cardiovascular disease and renal failure, ultimately result in death [1].
Although the pathogenesis of T2DM is multifactorial and complex, its current understanding encompasses hepatic insulin resistance, dysfunctional insulin signaling, abnormal glucose metabolism, and persistent hyperglycemia [1]. In addition to disease specific complications, several consequences of hyperglycemia have been described, such as an aberrant immune response, chronic inflammation, and tumorigenesis [2]. Cancer is increasingly common in the elderly, but persistent diabetes also increases the lifelong risk of developing pancreatic, liver, and colorectal cancers and also fuels the tumor microenvironment in cancer patients [2].
Anti-diabetic drugs such as biguanides, sulfonylureas, and glitazones have provided the current basis of understanding in the clinical management of T2DM. However, little is known regarding whether these drugs are also effective in reducing the associated cancer risk. Effective chemoprevention in T2DM will target processes involved in both glucose metabolism and carcinogenesis.
Molecular targets with emerging roles in both cancer and diabetes include a family of six different kinases, the p-21 activated kinases (PAKs) [3]. Here, we reviewed the literature to further understand PAK signaling in T2DM. We aimed to correlate the potential effects of anti-diabetic drugs on PAK signaling in order to provide insight on utilizing PAK signaling as a molecular target in cancer chemoprevention in diabetic patients.

2.1. Molecular Analysis of PAK Signaling Pathways and Their Involvement in Response to Anti-Diabetic Drugs

PAK interacting partners were identified using the STRING database as seen in [4,5]. Confidence was set to 0.40 and active prediction methods, neighborhood, gene fusion, co-occurrence, co-expression, experiments, database, and text mining analysis were performed. Interacting partners were identified in three different conditions which may predispose to T2DM using targets of reduced beta-cell mass (CDKAL1, CDKN2A, CDKN2B), beta cell dysfunction (MTNR1B, TCF7L2, KCNJ11), and obesity/insulin resistance (FTO, IRS1, PPARγ), as reported [1]. Novel PAK interacting partners were further investigated and their pathophysiological role in T2DM was investigated and references for further exploration of targets were provided. All PAK partners were analyzed according to the molecular pathway involved in T2DM.

3.1. PAK Signaling Is Associated with Diabetes and Cancer

Previous studies have provided a role for PAK in both diabetes and cancer, however a clear overview of the signaling pathways involved in both diseases has not been performed. Systematic review of the literature correlated 14 signaling pathways, which were identified as crucial to PAK, either upstream or downstream of PAK, and 11 or 78% of these pathways were also associated with glucose homeostasis (Table 1 and Table 2; Supplementary Figures S1 and S2). All of the PAK signaling pathways which were associated with glucose homeostasis were also associated with malignant inflammatory, proliferative, survival, and angiogenic signaling, which occurs in diseases such as cancer (Table 3 and Supplementary Figure S3).

3.2. PAK Interacting Partners Are Associated with the Pathogenesis of T2DM

We found that PAK interacting partners were correlated to the pathogenesis of T2DM. However, the role of PAK signaling in T2DM remained elusive. We surveyed this by analyzing the effect of anti-diabetic drugs metformin (met), glyburide (gly), and glitazones (glit) on PAK signaling pathways (Table 4). Overall, glit and met each altered ten PAK signaling pathways, whereas gly altered three (Figure 2A). Further analysis revealed all three anti-diabetic drugs altered pathways upstream and downstream of PAK (Figure 2B). Glit exerted the most profound effect on downstream PAK signaling pathways (mean: glit = 9 vs. met = 7; ANOVA, 95% CI: 0.31 to 3.2, p = 0.01) and (mean: glit = 9 vs. gly = 3; ANOVA, 95% CI: 5.3096 to 8.1904, p = 0.001). Met altered more pathways upstream of PAK (mean: met = 5 vs. gly = 1; ANOVA, 95% CI = −5.4 to −2.6, p = 0.001) and (mean: met = 5 vs. glit = 3; ANOVA, 95% CI = −2.6904 to 0.1904, p = 0.11) (Figure 2B).
Malignant PAK signaling is involved in disease pathogenesis. To further understand the role in which met, gly, and glit interfere with PAK signaling in T2DM, we asked if any of these drugs activate or inhibit inflammatory, proliferative, survival, or angiogenic pathways upstream and downstream of PAK (Figure 2C–F). Differential pathway analysis revealed met and glit consistently altered more pathways than gly (Figure 2C–F). Glit inhibited more pathways downstream of PAK than met in (inflammation: glit = 7 vs. met = 4), (proliferation: glit = 8 vs. met = 4), (survival: glit = 8 vs. met = 4), (angiogenesis: glit = 8 vs. met = 4) (Figure 2C–F). However, met activated more pathways than glit, which are exaggerated upstream of PAK and involved in inflammation (met = 4 vs. glit = 2), proliferation (met = 2 vs. glit = 0), survival (met = 3 vs. glit = 1), and angiogenesis (met = 3 vs. glit = 1) (Figure 2C–F). These data suggest that anti-diabetic drugs might alter PAK signaling. Metformin may activate pathways upstream and glitazones potentially inhibit pathways downstream of PAK.

3.4. Pioglitazone and Metformin Have Therapeutic Limitations in Cancer Patients with PAK Overexpression

Previous clinical trials have attempted to establish whether met and pioglitazone (pio) therapeutically have chemopreventive activity in humans, but the results remain highly ambiguous. We showed that met and pio altered the pathways both upstream and downstream of PAK, and asked whether the chemopreventive nature of these drugs was found in diseases with PAK overexpression. To investigate this, we analyzed clinical studies in diseases known to overexpress PAK in which met or pio treatment was tested (Table 5).
Initially, we screened hundreds of studies for diseases with PAK overexpression and either met or pio treatment. We found one observational-prospective cohort and six interventional studies (three single arm and three randomized double blind) with these criteria (Table 5 and Figure 3A).
We investigated the effect of anti-diabetic therapy in patients with PAK over-expression by calculating an overall clinical response rate (OCRR), which was defined as the total number of patients who had ≥50% decrease in the sum of all their lesions post-treatment. The OCRR in pio-treated patients was 53% (Figure 3B); 28/53 patients responded and 25/53 did not. The corresponding data for met were unavailable. To further evaluate patient outcome, we calculated the number of serious or other adverse events after pio and met treatment (Figure 3B). Comparison of pio and met treatment revealed a higher percentage of serious (pio: 3/53 = 5.7% vs. met: 3/91 = 3.3% chi-squared, p > 0.05) and other (pio: 42/53 = 79% vs. met: 68/91 = 74.7% chi-squared, p > 0.05) adverse events upon treatment with pio (Figure 3B). Additionally, in comparison to patients treated with met, a fewer percentage of pio-treated patients were without adverse effects (pio: 11/53 = 21% vs. met: 25/91 = 27.4%) (Figure 3B). Pioglitazone associated events included edema (15%), oral pain (13%), and hypertension (7.5%), while those associated with metformin were gastrointestinal symptoms like constipation (7%), diarrhea (23%), and nausea (13%). These data suggest that patients with tumors, which are known to have PAK overexpression, may have a good clinical response to pio; and both pio and met treatment, are associated with a high rate of mostly mild adverse events.

Although not associated with diabetes, other studies of chemoprevention have shown that anti-inflammatory drugs like aspirin in colorectal cancer and mesalamine in colitis associated cancer reduce cancer-associated risk [86,87]. Mesalamine, the first line treatment for chronic inflammation in ulcerative colitis [88], was recently established as a PAK1 inhibitor [17], and others have shown it is a PPARγ ligand [89]. Both of these mechanisms are in line with glitazones [14]. Therefore, future directions in chemoprevention in diabetes should analyze PAK expression/phosphorylation upon glitazone treatment and see if the effects are similar to those of mesalamine in impeding chronic inflammation in colitis associated colon cancer.

Anti-diabetics like pioglitazone or metformin should be utilized as a platform for further understanding the role of PAKs as a chemopreventive target in diabetes. However, before this is possible, future studies must standardize doses specific to the associated disease in order to modulate PAK signaling appropriately and minimize adverse effects. Ideal chemoprevention, like mesalamine, will block inflammation and impede aberrant PAK signaling without altering cellular homeostasis.

This manuscript was compiled as a research and literature review at the Medical University of the Americas (MUA). MUA accepted the terms and conditions required to further utilize this work for publication purposes.

This research did not receive any specific grant from any funding agency in the public, commercial or not-for-profit sector. 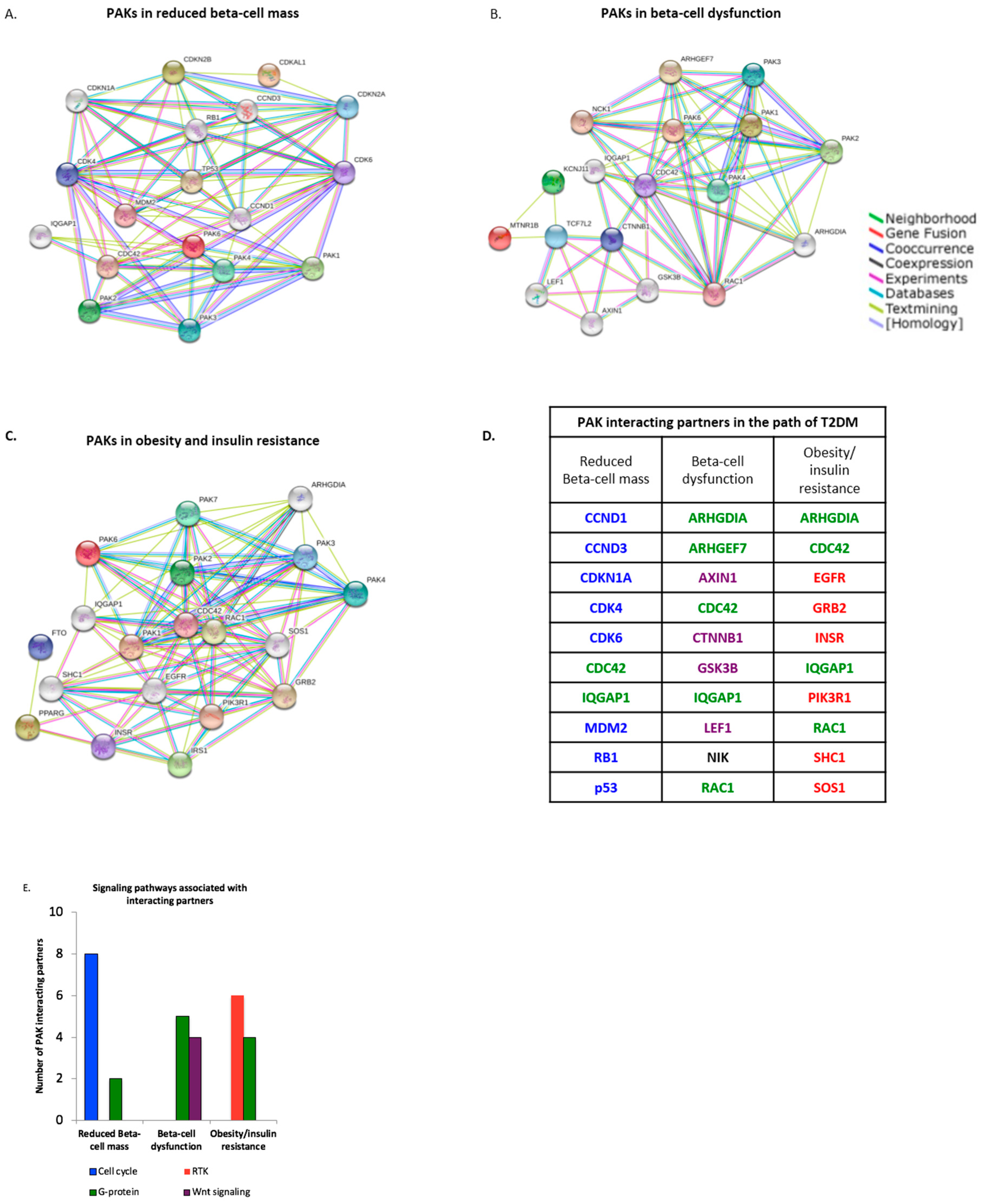 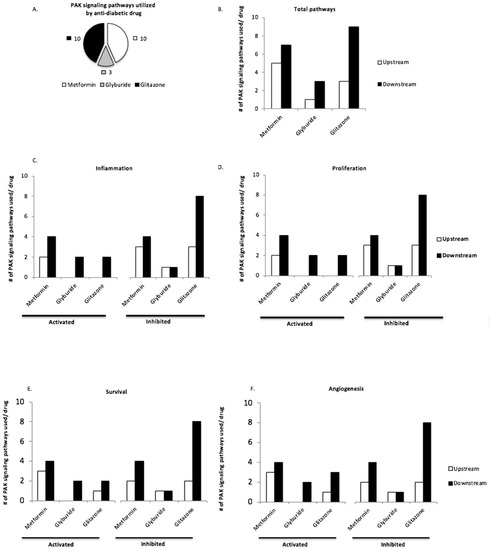 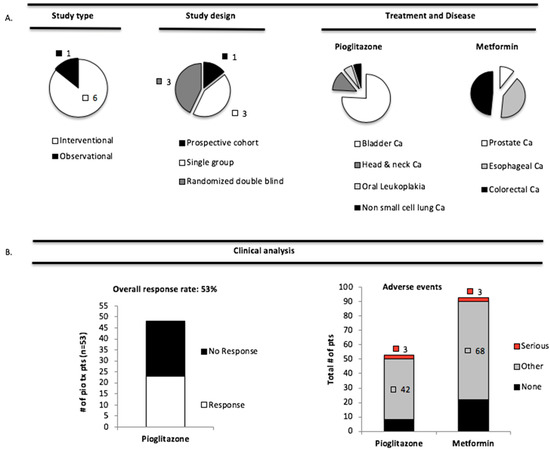 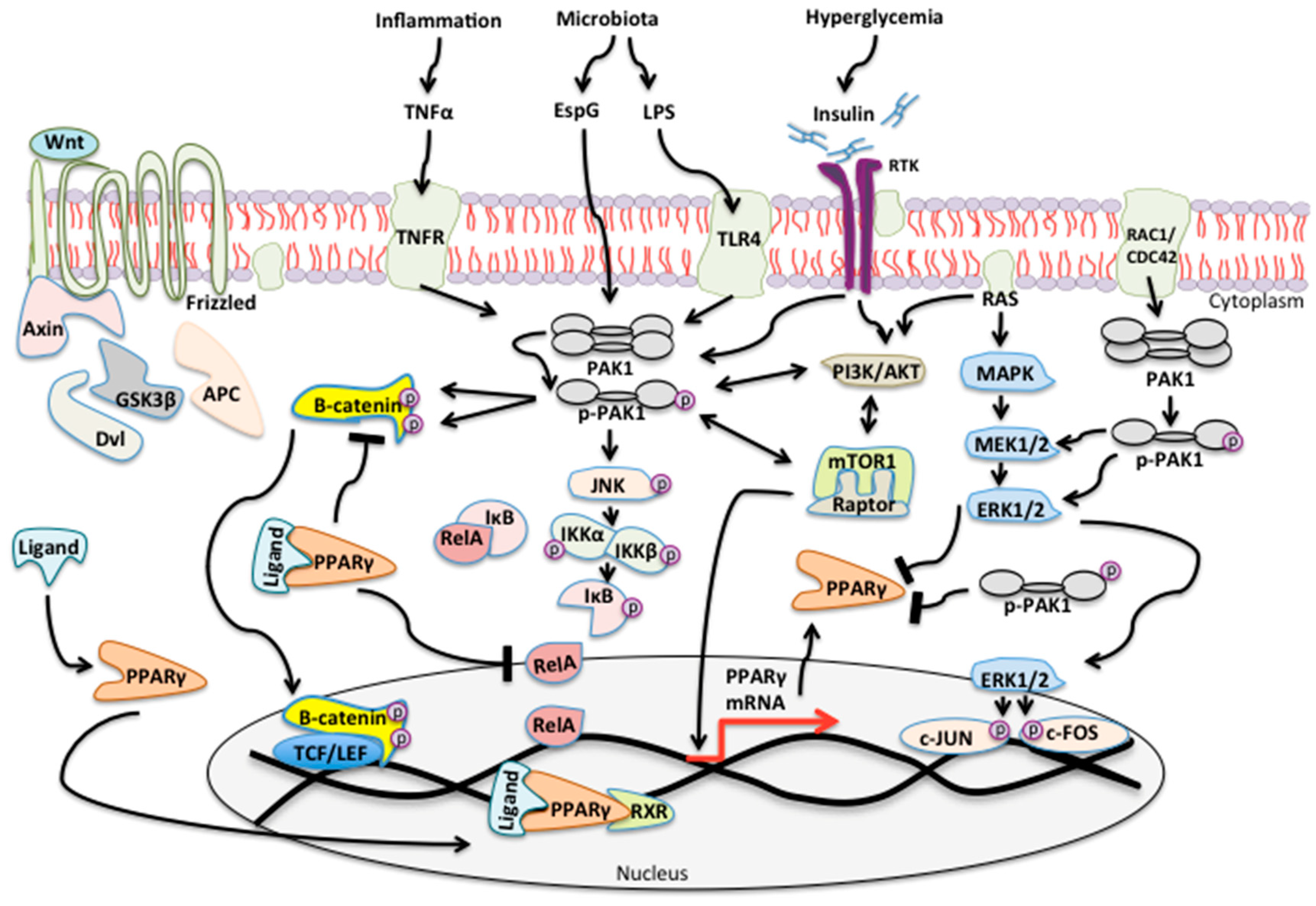