Previous studies have shown that walking is associated with increased longevity and a reduced risk of cardiovascular and age-related diseases. Whether walking benefits individuals with diabetes who are at high risk of coronary heart disease (CHD) remains to be determined. The objective of this study is to examine the association between walking and risk of CHD among elderly men with and without diabetes. Walking data was assessed in 2732 men aged 71 to 93 years participating in the Honolulu Heart Program from 1991–1993. Study participants were initially without disabilities and free of prevalent CHD. Men were then followed for incident CHD for up to 7 years. For men with diabetes who walked <0.25 miles/day, the age-adjusted incidence of CHD was significantly higher than in men without diabetes (27.1 vs. 12.7/1000 person years, p = 0.026). In contrast when distance walked was >1.5 miles/day, incidence of CHD was similar in men with and without diabetes (12.2 vs. 9.1/1000 person-years, p = 0.46). While risk of CHD declined significantly with increasing walking distance in men with diabetes after age and risk factor adjustment (p = 0.043, p = 0.025), associations in those without diabetes were weaker (p = 0.070, p = 0.10). These findings suggest that among elderly men with diabetes who are capable of physical activity, walking reduces CHD risk to levels similar to when diabetes is absent. Walking is an easy, safe and accessible form of physical activity that may have marked health benefits for elderly men with diabetes. View Full-Text
Keywords: coronary heart disease; diabetes; walking; Honolulu Heart Program; elderly men coronary heart disease; diabetes; walking; Honolulu Heart Program; elderly men
►▼ Show Figures 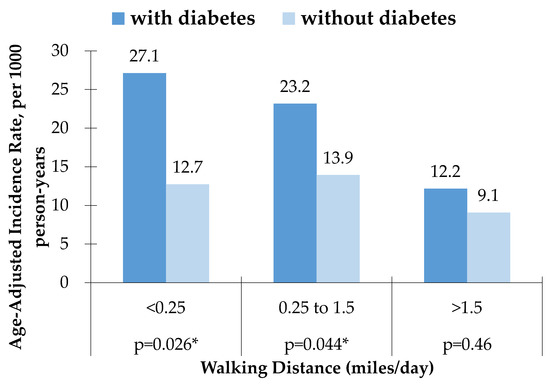