Homeless in Scotland: An Oral Health and Psychosocial Needs Assessment
Next Article in Special Issue

Decontamination of Dental Implant Surfaces by the Er:YAG Laser Beam: A Comparative in Vitro Study of Various Protocols

Oral rehabilitation with dental implants has revolutionized the field of dentistry and has been proven to be an effective procedure. However, the incidence of peri-implantitis has become an emerging concern. The efficacy of the decontamination of the implant surface, by means of lasers, is still controversial. Previous studies have revealed a reduction in osteoblast adhesion to carbon-contaminated implant surfaces. This in-vitro study aimed to evaluate the decontamination of failed implants by assessing the carbon proportion, after irradiation by low-energy erbium yttrium-aluminum-garnet laser (Er:YAG) (Fotona; 2940 nm, Ljubljana, Slovenia) for a single and for multiple passages, until getting a surface, free of organic matters; to find the appropriate procedure for dental-implant surface-decontamination. Ninety implants were used. Thirty sterile implants were kept as a negative control. Thirty failed implants were irradiated by the Er:YAG laser, for a single passage, and the other thirty, for multiple passages. The parameters used in our experiments were an irradiation energy of 50 mJ, frequency of 30 Hz, and an energy density of 3.76 J/cm2. A sapphire tip, with a length of 8 mm, was used with concomitant water spray irrigation, under air 6 and water spray 4. Super short pulse mode (SSP) was of 50 μs; irradiation speed being 2 mm/s. We used energy-dispersive X-ray spectroscopy (EDX) to evaluate the carbon proportion on the surfaces of the sterile implants, the contaminated, and the lased implants, with one (LX1) and with three passages (LX3). Statistical analysis was performed by ANOVA. Results showed mean difference between the three groups (contaminated, LX1, and LX3) with p < 0.0001, as between LX1 and Group A (p < 0.0001), while the difference between LX3 and the control group was not statistically significant. The decontamination of the implant surfaces with a low-energy Er:YAG laser with three passages, appeared to be an encouraging approach. View Full-Text
Keywords: carbon; cleaning; Er:YAG laser; implant; irradiation; multiple passages; peri-implantitis carbon; cleaning; Er:YAG laser; implant; irradiation; multiple passages; peri-implantitis
►▼ Show Figures 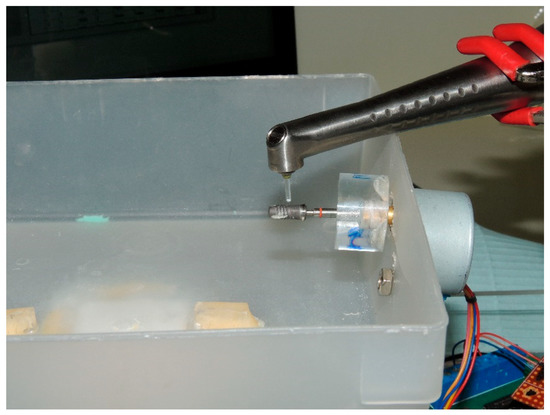