The oxygen reduction reaction (ORR) plays a key role in fuel cells and metal–air batteries to implement electrochemical energy conversion [1,2]. However, the sluggishness of ORR kinetics at the cathode limits their commercial application [3,4]. Pt and its alloys materials, recognized as the best ORR electrocatalysts, suffer from the resource deficiency, prohibitive cost and inferior durability [5,6]. Consequently, development of earth-abundance, cost-effective and performance-stable catalysts to substitute the precious-based catalysts for ORR is crucial yet challenging [7,8,9].
Heteroatom-doped carbon materials, such as P-doped carbon xerogel [10], N-doped nanotube [11,12], S-doped carbon [13,14] and B-doped graphene [15], are among the most promising electrocatalysts for ORR due to their advantages of relatively low cost, abundant reserves, good electronic conductivity and environmental friendliness [16,17]. Among them, N-doping has been considered to be one of the most effectual ways to enhance the electrocatalytic activities of carbon materials for ORR [18,19] because the N-doping can improve the electrical conductivity of carbon and change the charge distribution of the carbon atoms close to the dopants and then make them positively charged, which is beneficial to the adsorption and reduction of oxygen at the corresponding sites and improving the ORR activity [7,20,21].
However, the morphology of N-doped carbon materials prepared by traditional methods is hardly controlled, and the content of the N-dopant is relatively low because of the volatilization of the N element at high temperature, which has an undesirable effect on the electrocatalytic performance of the prepared materials. The employment of nanoreactor during the synthesis process can help relieve these challenges. The assistance of inorganic salts, such as NaCl [22,23], MgO [24], SiO2 [25,26] and Fe3O4 [27], has been considered to be an effective strategy to prepare porous carbon materials. Among them, NaCl is one of the most commonly used because NaCl can not only act as a confining agent to reduce the weight loss of precursors and promote the N-doping during the high-temperature pyrolysis process but also as pore-forming agents to promote the production of macro-pores and a 3D network structure. In addition, NaCl can be conveniently removed by water-washing with no use of any corrosive and harmful chemicals and can be facilely recycled by recrystallization. However, a cost-effective and large-scale synthetic production method is still highly desirable but challenging. During the past decade, various biomass-derived carbon ORR catalysts have aroused ever-growing attention [28,29,30,31]. Gingko is mainly used for food and medicine, but the shells are usually thrown away as garbage, which not only causes a huge waste of resources but also leads to environmental pollution.
Herein, we report a molten-salt-assisted strategy to fabricate a 3D high-level nitrogen-doped porous carbon nanosheets network (N–pC) by a facile high-temperature pyrolysis method, employing the carbon-enriched biomass waste of gingko shells and urea as a carbon precursor and NaCl and urea as a fully sealed nanoreactor and a nitrogen source, respectively. The merits, such as large specific surface area, hierarchical pore structure and high active nitrogen (pyridinic and graphitic-N) content, endow the obtained N–pC excellent electrocatalytic ORR performance in alkaline solution, much superior to commercial Pt/C and most of the reported N-doped carbon materials. Inspired by the excellent ORR catalytic performance, the prepared N–pC was further used to assemble Zn–air batteries, which showed high peak power density, large specific-capacity and good rate-capability, making it a competitive alternative to the application in metal–air batteries.

2.1. Synthesis of the Materials

N–pC was prepared by pyrolyzing the mixture of gingko shells, NaCl and urea. Typically, 0.5 g gingko shells rinsed by deionized water, 1.4 g NaCl and 4 g urea were mixed to refined powder by planetary ball-milling for 4 h. Then, the mixture was initially carbonized under Ar atmosphere at 750 °C for 2 h with a ramp rate of 3 °C min−1. Subsequently, the obtained product was refluxed in 3 M HCl (50 mL) for 6 h and washed with deionized water 3 times. After being dried at 80 °C for 24 h, the obtained black powder was further pyrolyzed at 900 °C for 2 h, and then the final product (N–pC) was harvested. For comparison, N–C catalyst was fabricated through the same procedure in the absence of NaCl. C catalyst was also synthesized by direct pyrolysis of the gingko shell powder.

All the electrochemical tests were implemented on bipotentiostat (CHI760E, Shanghai, China) assembled with a rotation system (Pine Research Instrumentation, Durham, NC, USA) in a three-electrode system. A carbon rod, an Ag/AgCl elctrode (in saturated KCl solution) and a glassy carbon electrode (GCE) loaded with various catalyst (N–pC, N–C, C or benchmark 20 wt.% Pt/C) were used as the counter electrode, reference electrode, and working electrode, respectively. To prepare the working electrode, 14 µL the catalyst ink obtained by dispersing 1 mg catalyst powder into 0.5 mL Nafion solution (0.05 wt.%) via sonication was dropped onto the GCE, keeping the catalyst loading of 141.6 µg cm−2. All potentials versus Ag/AgCl electrode (EAg/AgCl) were converted to the reversible hydrogen electrode (ERHE) based on the formula of ERHE = EAg/AgCl + EθAg/AgCl + 0.059pH.
Cyclic voltammetry (CV) and linear sweep voltammetry (LSV) measurements were carried out in 0.1 M KOH electrolyte at a scanning rate of 100 mV s−1 and 10 mV s−1, respectively. The electron transfer number (n) was calculated using the Koutecky–Levich (K-L) equation: where J and Jk are the measured disk’s current density and the kinetic current density, respectively, ω is the angular velocity of rotation. F is the Faraday constant (96,485 C mol−1), C0 is the O2 concentration in electrolyte (1.2 × 10−6 mol cm−3), D0 is the O2 diffusion coefficient (1.9 × 10−5 cm2 s−1), and υ represents the kinematic viscosity of the electrolyte (1.13 × 10−2 cm2 s−1).
The yield of HO2− and the n values for ORR via the RRDE measurements were determined by the equations as below: where Id and Ir are the current density on disk and ring electrode, respectively, and N is the current collection efficiency of Pt ring, which is equal to 0.37.
The durability and the possible methanol crossover effect of N–pC and benchmark Pt/C catalyst were evaluated by chronoamperometric measurement at a rotation of 1600 rpm and a fixed potential of 0.7 V (versus RHE) in the O2-saturated 0.1 M KOH solution.
The homemade Zn–air battery (ZAB) was equipped with a polished pure Zn plate (0.5 mm in thickness) as the anode, carbon paper (2 cm × 2 cm) uniformly coated with the catalyst (N–pC or benchmark 20 wt.% Pt/C, mass loading: 1 mg cm−2) as the air cathode and 6 M KOH solution as the electrolyte.

The following are available online at https://www.mdpi.com/article/10.3390/pr9122124/s1 Table S1: Comparison of electrocatalytic ORR performance between N-pC and state-of-the-art metal-free catalysts reported in the literatures in alkaline electrolyte; Table S2: Comparison of the performance of primary Zn-air batteries assembled with various cathodic electrocatalysts.

X.W. and H.Z. designed and carried out the experiment; W.H. and R.L. contributed to the formal analysis and data curation; writing—original draft preparation was mainly accomplished by W.H.; writing—review and editing was implemented by R.L., R.W. and J.S.C. All authors have read and agreed to the published version of the manuscript.

This research was funded by the Education Department of Sichuan Province (Grant 18ZB0494) and Sichuan Science and Technology Program (Grant 2020YJ0299). 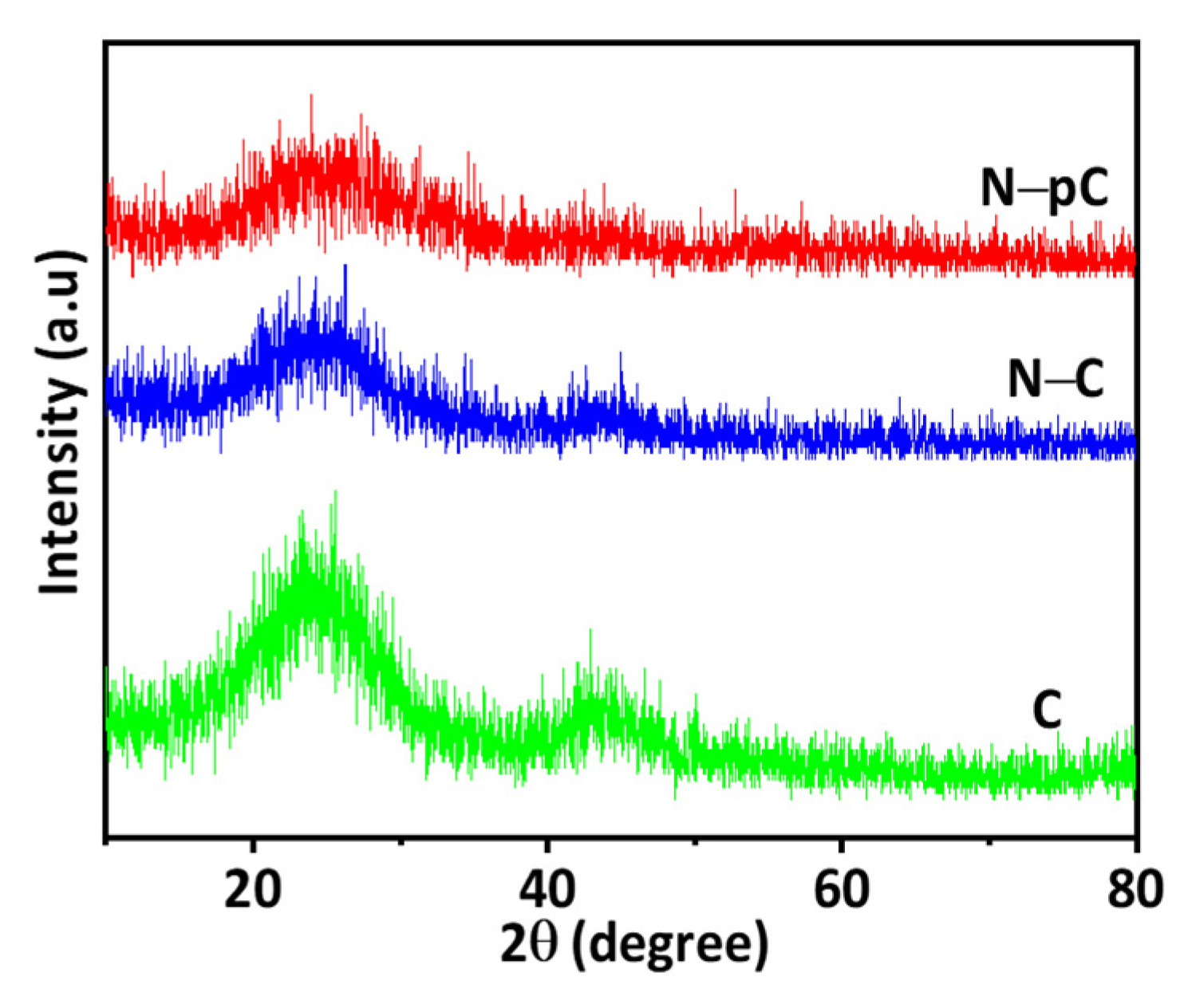 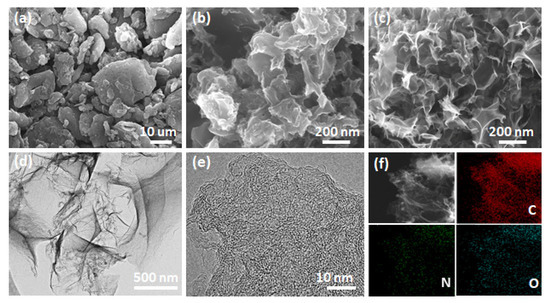 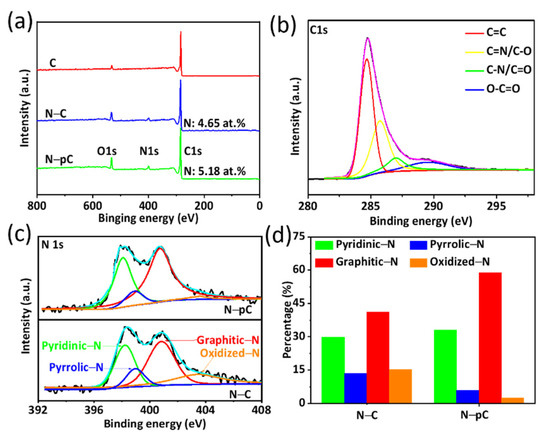 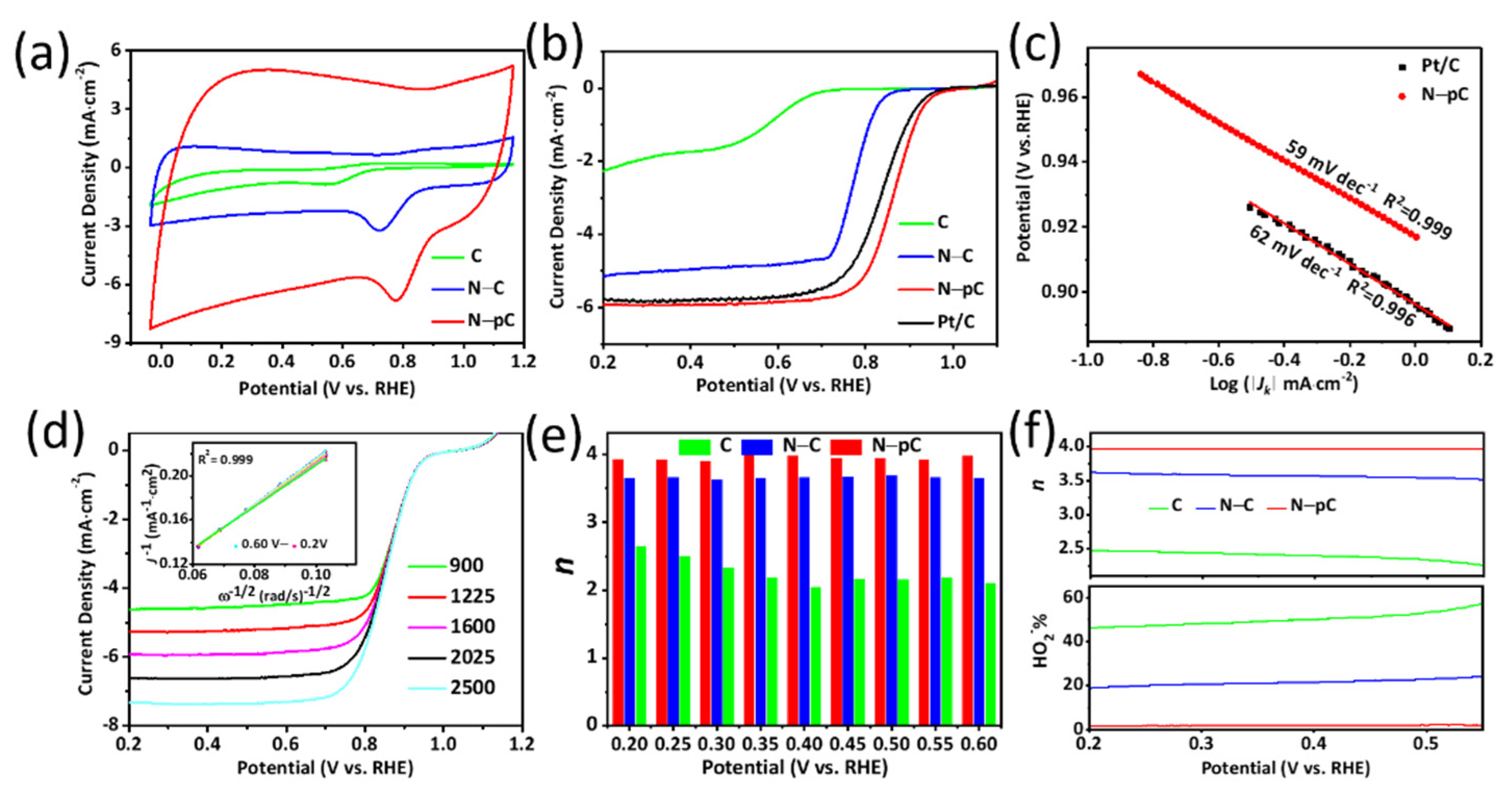