Single and Binary Adsorption Behaviour and Mechanisms of Cd2+, Cu2+ and Ni2+ onto Modified Biochar in Aqueous Solutions

:
In systems biology, biological phenomena are often modeled by Ordinary Differential Equations (ODEs) and distributed in the de facto standard file format SBML. The primary analyses performed with such models are dynamic simulation, steady-state analysis, and parameter estimation. These methodologies are mathematically formalized, and libraries for such analyses have been published. Several tools exist to create, simulate, or visualize models encoded in SBML. However, setting up and establishing analysis environments is a crucial hurdle for non-modelers. Therefore, easy access to perform fundamental analyses of ODE models is a significant challenge. We developed SBMLWebApp, a web-based service to execute SBML-based simulation, steady-state analysis, and parameter estimation directly in the browser without the need for any setup or prior knowledge to address this issue. SBMLWebApp visualizes the result and numerical table of each analysis and provides a download of the results. SBMLWebApp allows users to select and analyze SBML models directly from the BioModels Database. Taken together, SBMLWebApp provides barrier-free access to an SBML analysis environment for simulation, steady-state analysis, and parameter estimation for SBML models. SBMLWebApp is implemented in Java™ based on an Apache Tomcat® web server using COPASI, the Systems Biology Simulation Core Library (SBSCL), and LibSBMLSim as simulation engines. SBMLWebApp is licensed under MIT with source code freely available. At the end of this article, the Data Availability Statement gives the internet links to the two websites to find the source code and run the program online.
Keywords:
SBML; kinetic models; time-course simulation; steady-state simulation; parameter estimation; model calibration; software; web application 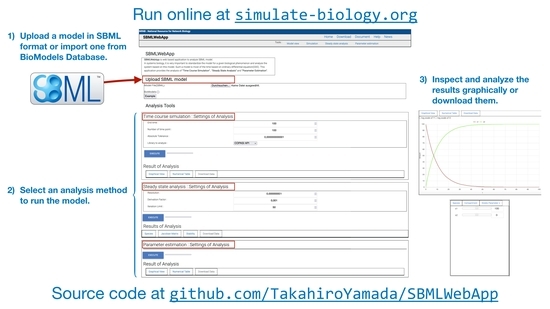 SBMLWebApp is implemented in Apache Tomcat® (https://tomcat.apache.org, accessed on 13 October 2021), and all servlets were written in Java™. The app uses the Bootstrap framework and is deployed on a Java application server using JQuery. SBMLWebApp uses AJAX software within the communication configuration between frontend and backend (GWT, http://www.gwtproject.org, accessed on 13 October 2021). The time course simulation servlet is executed using COPASI [27], SBSCL [36,37] with JSBML [38] as its internal data structure, and LibSBMLSim [39] that is based on libSBML [40]. The steady-state analysis servlet and parameter estimation servlet use COPASI [27]. The SBMLWebApp is accessible at http://simulate-biology.org. Our app uses the standard file format for computational models, SBML [25,26], and is compatible with SBML Level 3 Version 1 core [41].

Either a local SBML model or models from the BioModels Database [42] can be selected on the front page. BioModels is a highly curated database for computational biological models, currently containing 1017 manually curated SBML models (August 2021).
After selecting the SBML model, the relationships between species and reactions (stoichiometric network) are visualized (Figure 1) based on cytoscape.js [43].
To run a time course simulation with the model, the user can specify the end time, the number of time points, the absolute tolerance, and the simulation library to use as a solver backend. After setting these parameters and pressing the execute button, the simulation result is visualized as a graph (Figure 2), and the numerical results are provided in a table. Via the window on the right side, the initial amount of each species, the size of compartments, and values of kinetic parameters in the model can be edited. The respective simulation is executed on the fly.
To run a steady-state analysis with the model, the available parameters that the user can specify include the resolution, derivation factor, and iteration limit to search steady states. After steady-state analysis, a single steady-state point of given initial expression for each species and the corresponding Jacobian matrix of this point is visualized as a numerical table (Figure 3).
To run a parameter estimation with the model, the algorithm, iteration limit to search fitted parameters, and fitting tolerance can be set. Available algorithms include the Levenberg-Marquardt algorithm [44,45], the Nelder Mead-algorithm [46], the particle swarm optimization method [47], and the differential evolution method [48]. The two latter optimization methods had been found to be particularly promising for the task of dynamic model calibration in systems biology applications [49]. The execution of a parameter estimation leads to a visualization of the simulation result with calibrated parameters and experimental results in Figure 4 and fitted parameters as a numerical table. The range of search parameters can be set in the window on the right side, and an analysis based on it can be executed after pressing return.
All result data can be downloaded via the “Download” tab. The graphs and tables are downloaded as PNG and CSV file, respectively. In parameter estimation, the model with calibrated parameters can be downloaded in SBML format.

In the following section, one working example is provided, which demonstrates the functionality of the SBMLWebApp. This example is based on the work by Perelson et al. [50] and can be found on the BioModels database https://identifiers.org/biomodels.db/BIOMD0000000874, accessed on 13 October 2021. The SBMLWebApp provides three different methods for further analyses of kinetic models (time-course simulation, steady-state analysis, and parameter estimation). First, we have shown that the SBMLWebApp can reproduce the results of the simulations performed by Perelson et al. [50] on the population changes of T cells, latently infected T cells, actively infected T cells, and free viruses under various conditions (Supplementary Figures S1–S4). We have also shown that their theoretically derived unstable fixed points, stable fixed points, and unstable fixed points with oscillations for these populations can be analyzed numerically equivalent by the SBMLWebApp (Supplementary Figures S5–S7). Furthermore, in the parameter estimation for the time-series change of free virus in 10 HIV-infected patients by Stafford et al. [51], we showed that the SBMLWebApp could estimate parameters in good agreement with the measured results (Supplementary Figure S8). Table 1 provides an overview of the model and compares the outcomes of their analyses based on the model created as part of the study at hand.

5. Limitations of the Application

The app is developed using the most recent standards from the systems biology community, see also [52]. It currently only supports models in the format SBML Level 3 Version 1 [53]. Model calibration was performed using CellDesigner [54,55]. As such, the SBMLWebApp is bound by the features of CellDesigner. Some features of the SBMLWebApp are based on COPASI [27], which belongs to the leading simulation tools in the field of computational biology. However, this dependency also brings with it the application’s limitation to the features of this third-party software, see also [56]. This is also the reason why the SBMLWebApp is not able to estimate parameters using log-transformed loss functions. Kinetic models in biology often grow in size and thus in complexity. It is recommendable to use small or medium-sized models to allow the best possible functionality of the features provided by the SBMLWebApp. As such, computation times for individual analysis steps will differ, depending upon the size of the model. For data security reasons, the application does not store any user information. As such, any data that is not downloaded after running the analysis steps will be lost. At the moment, the SBMLWebApp is restricted to a selection of fundamental analyses in kinetic modeling. Future versions of SBMLWebApp will also include an easily accessible flux balance analysis tool because of the growing importance of this method.

SBMLWebApp is a user-friendly, web-based and freely available application to execute time course simulation, steady-state analysis, and parameter estimation for models in SBML. As open-source software, SBMLWebApp can be used as an example implementation of such a service and allows contributions and feature requests from the scientific community. It was developed to provide novice modelers and other non-specialist intuitive access to the core analyses for kinetic SBML models.

We thank all organizers of Google Summer of Code, National Resource for Network Biology (NRNB) in particular, and Google Inc. for allowing us to start this project. M.K. is supported by the Federal Ministry of Education and Research (BMBF, Germany) within the research network Systems Medicine of the Liver (LiSyM, grant No. 031L0054) and by the Deutsche Forschungsgemeinschaft (DFG, German Research Foundation) within the Research Unit Programme FOR 5151 “QuaLiPerF (Quantifying Liver Perfusion–Function Relationship in Complex Resection––A Systems Medicine Approach)” by grant No. 436883643. A.D. was funded by the German Center for Infection Research (DZIF) within the Deutsche Zentren der Gesundheitsforschung (BMBF-DZG, German Centers for Health Research of the Federal Ministry of Education and Research), grant No. 8020708703. M.F. is funded by the DFG under Germany’s Excellence Strategy – EXC 2124 – 390838134 and supported by the Cluster of Excellence Controling Microbes to Fight Infections (CMFI) (grant No. EXC-2124/05.037_0 to AD). The authors acknowledge support from the Open Access Publishing Fund of the University of Tübingen (https://uni-tuebingen.de/en/58988, accessed on 13 October 2021).

The SBMLWebAPP is accessible from http://simulate-biology.org, and all source code of the project is available from https://github.com/TakahiroYamada/SBMLWebApp.

The authors are grateful to Theresa Anisja Harbig and Martin Lang for their support in administrating the compute server. 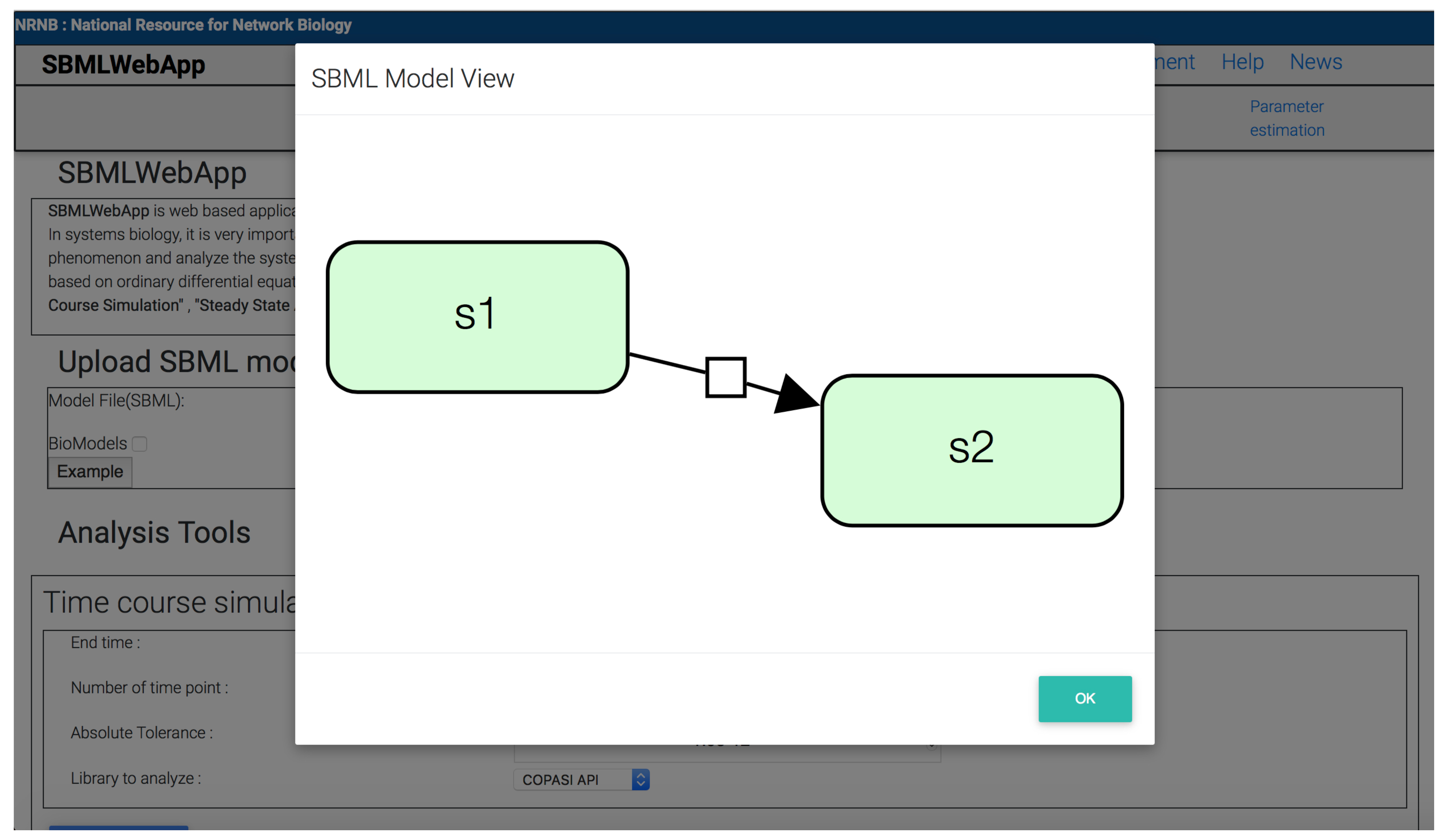