The development of novel delivery systems for bioactive substances has a wide field of applications in food [1], cosmetic [2], and pharmaceutical [3] industries. Many of those organic active substances are either unstable, and/or insoluble in water and consequently have low bioavailability. Especially targeting and influencing release kinetics is a great challenge. Encapsulation of these substances in colloidal lipophilic systems, such as emulsions, allows an application in aqueous solutions for use in human bodies or other life science systems [4,5]. The transformation of such emulsions into suspensions enables a further specialization. The solid state of the obtained colloids allows surface functionalization and diffusion controlled release for site-specific and adjusted release kinetics of bioactive substances [6,7,8].
Colloidal delivery systems with a crystalline dispersed phase can be produced in a two-step melt emulsification process [9]. In the first step, the dispersed phase is emulsified above its melting temperature in a mechanical or thermo-physical emulsification process. In the second step, the droplets are cooled down until crystallization occurs and the emulsion forms a fine dispersed suspension [10,11,12]. While bulk crystallization is quite well understood today, crystallization of molten droplets in emulsions poses challenges [13]. Different to bulk crystallization, organic droplets in oil-in-water emulsions show individual crystallization behavior which differs from droplet to droplet. During supercooling, droplets can remain as supercooled liquid, form amorphous particles, or crystallize as mono and multi crystalline structures. The formation of different structures within emulsions during crystallization depends on the materials used, the thermal energy, and external forces which influence nucleation in emulsions [14]. For example, surfactants may initiate heterogeneous nucleation at the interface and influence the form of particles after crystallization [15,16], collisions cause secondary heterogeneous nucleation and increase nucleation rates [17,18], and shear stress can influence nucleation mechanisms by forming shear-dependent crystalline structures [19,20]. Therefore, resulting particle size, shape, and physical state of dispersions after cooling depend on the formulation and on the melt emulsification process itself, and can eventually influence application properties such as bioavailability, drug loading, and release behavior of colloidal delivery systems [21,22].
Apart from life science systems, solidification of droplets occurs in a number of industrial applications, such as formulations of mold release agents, mini emulsion polymerization (including semi crystalline polymers), or hydrate formation in droplets during pipeline transport of crude oil [23,24]. Therefore, various methods to characterize crystallization behavior, crystal structure, and solid fraction in emulsions were developed and established in the past decades [25,26,27,28,29,30,31]. Commonly used methods are based on differential scanning calorimetry [32], ultrasound velocimetry [33], and X-ray diffraction [34]. Unfortunately, those methods describe integral quantities and are not able to detect crystallization events in single droplets or to differentiate between crystallization events in different single droplets within emulsions.
In this contribution, we propose a novel direct thermo-optical method that was developed to: (1) describe the crystallization behavior of droplets in the range of 1 µm to several hundred µm in concentrated micro emulsions, and (2) to detect and characterize individual crystallization events in single droplets of droplet clusters. At the same time, the determination of particle size, size distribution, and morphology—with additional differentiation between liquid, amorphous, and crystalline structures—enables the introduction of the crystallization index, CIi. We applied the thermo-optical analysis to a hexadecane oil-in-water model emulsion stabilized with Tween® 20, and compared the results with calorimetric measurements of crystallization behavior within the dispersion. Using our thermo-optical approach, we were able to detect single crystallization events within droplet clusters and differentiate in our model emulsion between liquid, supercooled liquid, and multi-crystalline states of the dispersion during the crystallization process.

All substances used were commercially available and used as obtained without further purification or processing, unless otherwise noted. Hexadecane (purity 99%, melting point at 18 °C) was purchased from Sigma-Aldrich® (St. Louis, MO, USA) and polyoxyethylen-20-sorbitanmonolaurat (Tween® 20) was purchased from Carl-Roth® (Karlsruhe, Germany). Water was purified in a Milli-Q® instrument (Q-POD®, 18.2 MΩ) (Darmstadt, Germany).

Every emulsion was prepared three times for triple determination and consisted of 1 wt % hexadecane (dispersed phase), 1 wt % Tween® 20 (surfactant), and 98 wt % Milli-Q water (continuous phase). First, Tween® 20 was dissolved in tempered Milli-Q water at 28 °C (10 K above melting point of hexadecane) and stirred for 10 min at 28 °C in a glass vessel of 25 mm inner diameter. Afterwards, hexadecane was added to the surfactant solution and tempered with a tooth-rim dispersing element for an additional 15 min at 28 °C without stirring. Then, hexadecane was dispersed with a tooth-rim dispersing machine (IKA® T25 digital, ULTRA-TURRAX®, Staufen im Breisgau, Germany) at 2.2 m/s tangential speed (3200 rpm, 13 mm rotor outer diameter) 10 K above its melting point for 10 min. After emulsification, samples were taken for differential scanning calorimetry (DSC), laser diffraction/droplet size measurements, and thermo-optical polarized microscopy analysis. Between emulsification and analysis, the emulsions were continuously stirred to avoid creaming/inhomogeneous sampling and kept above the melting temperature of hexadecane (18 °C). During the experimental part, emulsions did not show any sign of instability.

2.3. Characterization of Emulsions and Crystallization Behavior

For thermal analysis, samples of bulk hexadecane (between 5 and 6 mg) and samples of hexadecane-in-water emulsions (between 9 and 10 mg) were weighed and sealed in aluminum pans. Samples with bulk hexadecane and hexadecane emulsions were then loaded in a differential scanning calorimeter (DSC 8000, Perkin Elmer, Waltham, MA, USA) and cooled from 25 to 0 °C with a cooling rate of 1 K/min. Afterwards, samples were heated from 0 to 25 °C with a heating rate of 1 K/min. The DSC apparatus had previously been calibrated against n-decane and indium. Every sample was run against an empty aluminum pan. Differential scanning calorimetry measurements were performed to measure the solid fraction and the onset phase transition temperature during controlled cooling and heating of bulk hexadecane and 1 wt % hexadecane in Milli-Q water emulsions stabilized with 1 wt % Tween® 20. Therefore, the heat flows of bulk hexadecane and hexadecane oil-in-water emulsions were recorded as a function of temperature. The peaks of the heat flow curve were used to identify crystallization and melting onset temperature during temperature scans. Peak areas were calculated to quantify the solid fraction during liquid-solid and solid-liquid phase transitions according to McClements [32].

The droplet size distributions (DSD) of emulsions were determined by a laser diffraction particle size analyzer (HORIBA LA-940, Retsch Technology, Haan, Germany) in a stirred fraction cell. The measuring range of the instrument is between 0.01 and 3000 µm due to data analysis using a combination of laser diffraction and Mie scattering theory. The refractive index used for hexadecane was 1.434 + 0.000i. Emulsions were strongly diluted and measured three times above melting temperature of hexadecane. Measurements of crystallized emulsions were not possible due to the absence of cooling equipment in the stirred fraction cell.

The thermo-optical observation of the crystallization behavior of hexadecane-in-water droplets in a droplet collective was investigated using a customized polarizing microscope (Eclipse Ci-L, Nikon, Shinagawa, Tokyo, Japan) equipped with an optically accessible temperature controlled stage (LTS 420, Linkam Scientific, Tadworth, UK).
After the emulsification step, 25 µL of emulsion were pipetted between two microscope cover slips placed on a tempered microscope object slide using a tempered pipette, then covered with a third cover slip and sealed with silicone at 28 °C. Afterwards, the sealed samples were placed in the optically accessible temperature-controlled stage and held at 28 °C until the start of experiment as shown in Figure 1. Time between emulsification and experiment was always less than 15 min.
To investigate the crystallization behavior of droplets in emulsions, sealed samples were cooled down from 28 to 0 °C with cooling rate of 1 K/min. During the entire experiment, picture sequences of the crystallizing dispersion were taken every 0.2 K.

We thank AiF for funding our IGF-project 18462 N and the research association GVT. 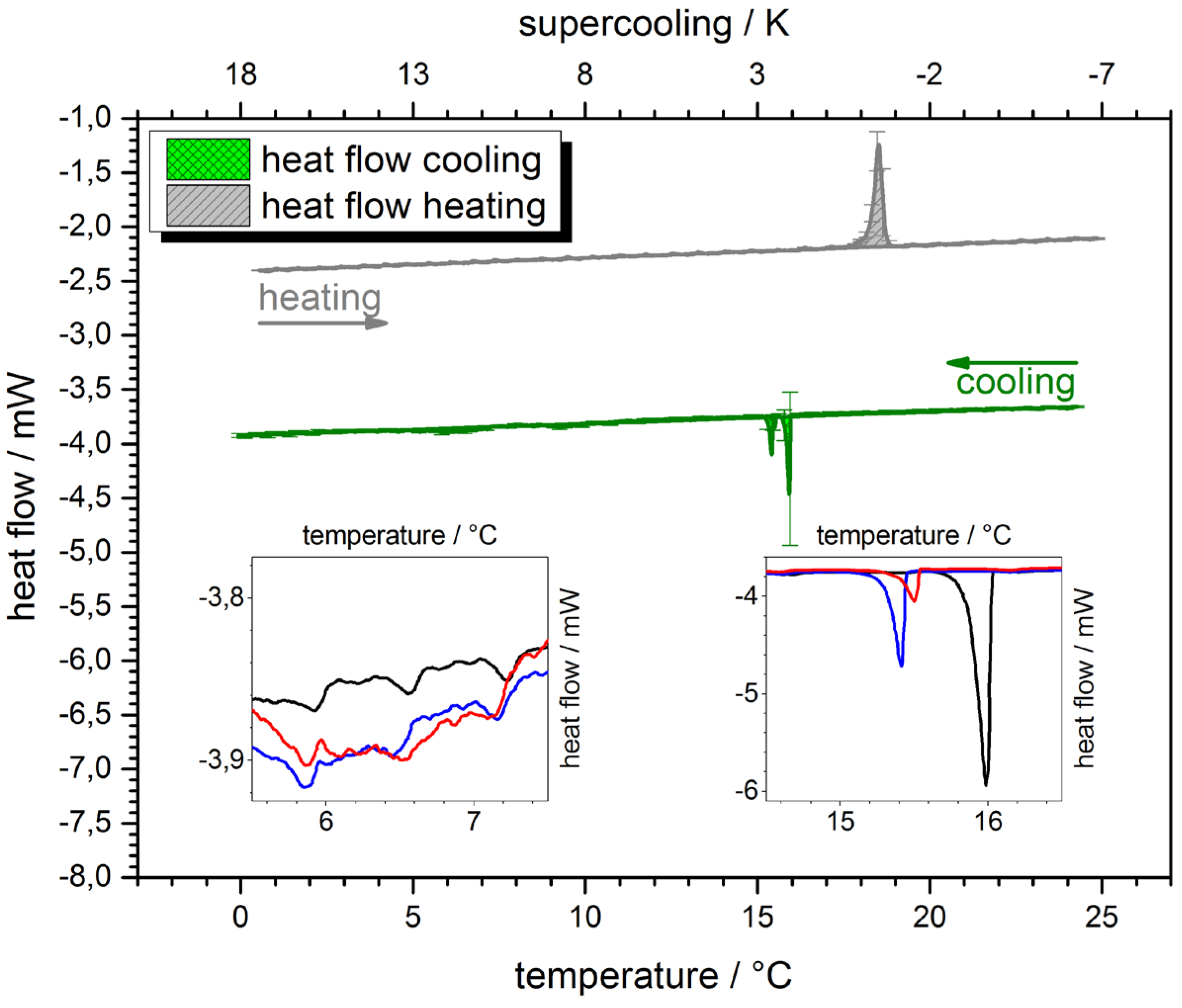 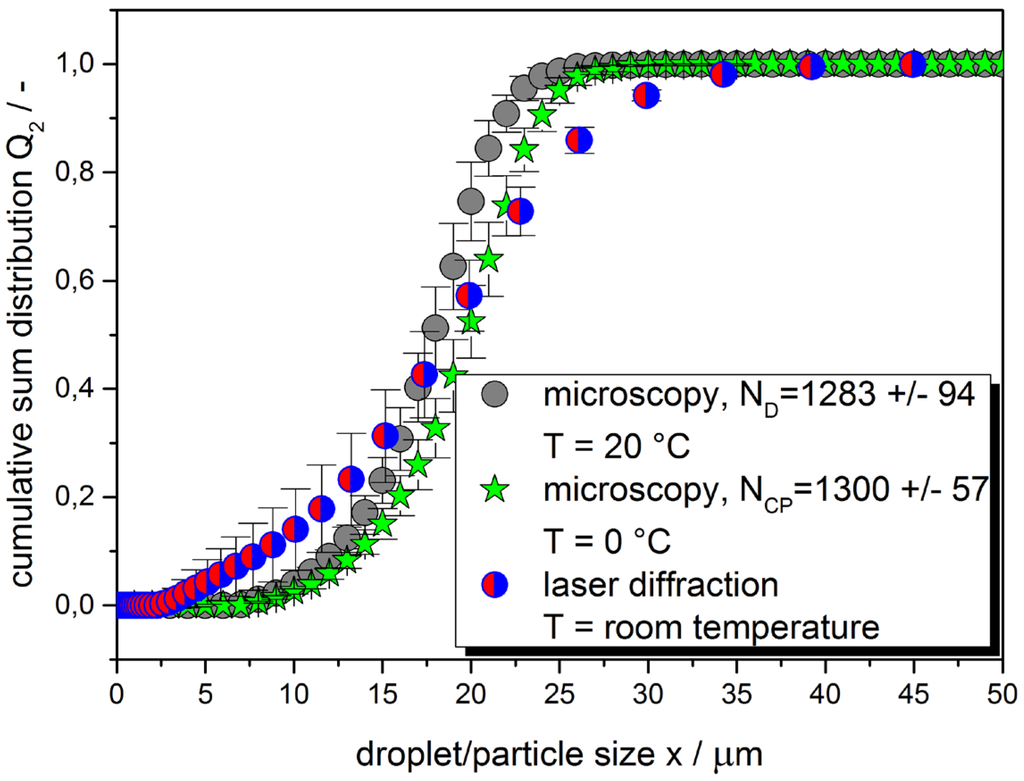 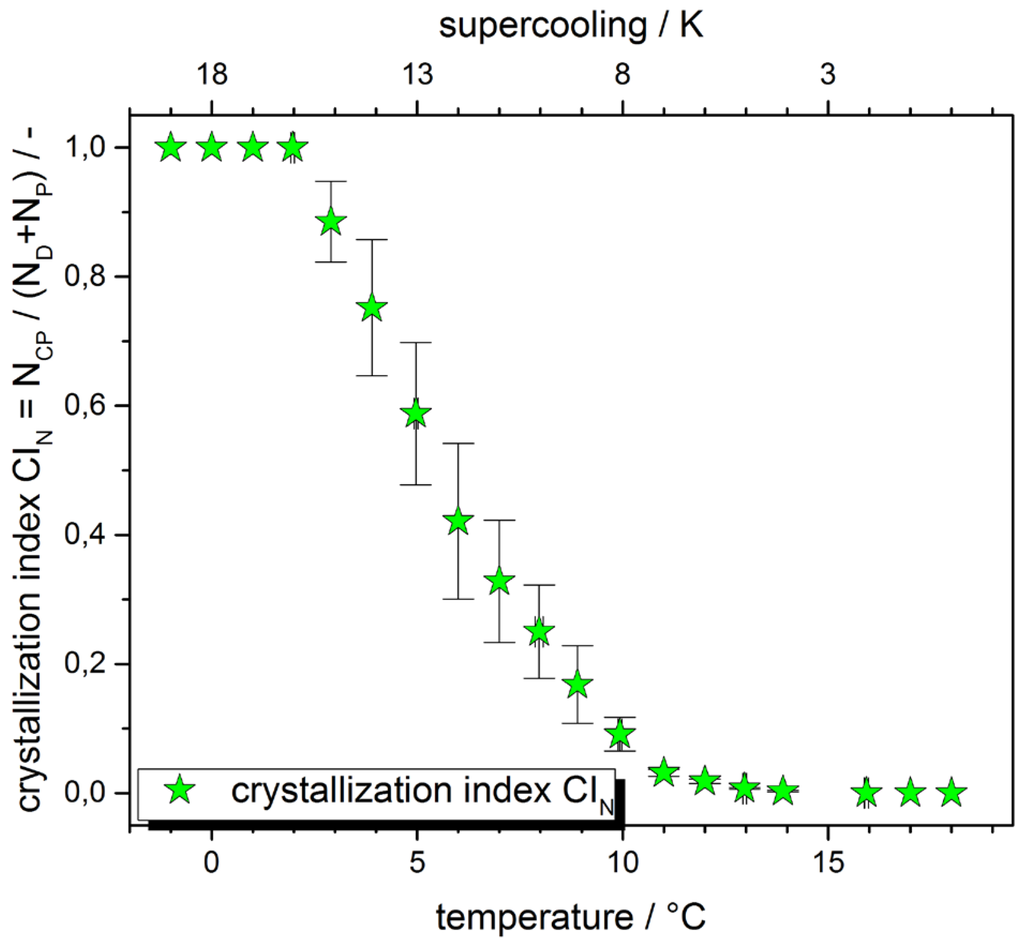 Table 1. Evaluation of phase transition onset temperature, energy and enthalpy of thermal analysis measurements of bulk hexadecane and of 1 wt % hexadecane in Milli-Q water emulsions stabilized with 1 wt % Tween® 20 according to Figure 3 and Figure 4.