Structure and Dynamics of Oxidized Lipoproteins In Vivo: Roles of High-Density Lipoprotein
Previous Article in Journal

Dyslipidemia is a major traditional risk factor for cardiovascular disease (CVD) in chronic kidney disease (CKD) patients, although the altered lipid profile does not explain the number and severity of CVD events. High-density lipoprotein (HDL) is a heterogeneous (size, composition, and functionality) population of particles with different atherogenic or atheroprotective properties. HDL-cholesterol concentrations per se may not entirely reflect a beneficial or a risk profile for CVD. Large HDL in CKD patients may have a unique proteome and lipid composition, impairing their cholesterol efflux capacity. This lack of HDL functionality may contribute to the paradoxical coexistence of increased large HDL and enhanced risk for CVD events. Moreover, CKD is associated with inflammation, oxidative stress, diabetes, and/or hypertension that are able to interfere with the anti-inflammatory, antioxidative, and antithrombotic properties of HDL subpopulations. How these changes interfere with HDL functions in CKD is still poorly understood. Further studies are warranted to fully clarify if different HDL subpopulations present different functionalities and/or atheroprotective effects. To achieve this goal, the standardization of techniques would be valuable.
Keywords: HDL subpopulations; cardiovascular disease risk; chronic kidney disease; inflammation; oxidative stress; HDL functionality HDL subpopulations; cardiovascular disease risk; chronic kidney disease; inflammation; oxidative stress; HDL functionality

Chronic kidney disease (CKD) is characterized by a decline in kidney function and/or altered renal structure, causing a gradual to permanent loss of kidney function over time. In end-stage renal disease (ESRD), the worst stage of CKD, the loss of kidney function is irreversible, and patients require renal replacement therapy for survival.
CKD has a major effect on global death risk, being an important cause of morbidity and mortality worldwide [1]. In CKD patients, cardiovascular disease (CVD) events are the most frequent cause of death, with ESRD patients presenting the highest risk of mortality due to CVD [2]. According to the Global Burden Disease of Chronic Kidney Disease Collaboration report, kidney disease per se is an important independent risk factor for CVD [1]. Undeniably, there is a close relationship between CKD and CVD—the dysfunction of one organ causes dysfunction of the other, culminating in the failure of both organs, which is known as cardiorenal syndrome.
The high prevalence of traditional and non-traditional CVD risk factors has been pointed to as an explanation for the high incidence of CVD in CKD patients. In fact, the traditional CVD risk factors alone do not explain the high CV risk in CKD [3]. Moreover, standard clinical interventions for CVD management that are successful in the general population are often unsuccessful in reducing the mortality rate in CKD patients [3]. In the more severe stages of CKD, coronary artery disease (CAD), congestive heart failure, arrhythmias, and sudden cardiac death seem to be important causes of CV mortality [4].
Dyslipidemia is one of the major traditional risk factors for CVD in the general population, and the same occurs in CKD patients, showing dyslipidemia due to alterations in lipid metabolism. The most common changes in lipid profile include an increase in triglycerides (TG), lipoprotein (a), and oxidized lipids, and a reduction in high-density lipoprotein cholesterol (HDLc) values. Hypertriglyceridemia may be explained by an increase in apolipoprotein (Apo) C-III and impairment of very-low-density lipoprotein (VLDL) catabolism, due to lipoprotein lipase deficiency/dysfunction [5]. Both decreased production of Apo A-I and reduced activity of lecithin-cholesterol acyltransferase (LCAT) contribute to the reduction in HDL production observed in CKD [6]. In line with these changes, a rise in TG/HDLc values has been pointed to as a predictor of poor CVD outcome in CKD patients [7]. Decreased values of total cholesterol and low-density lipoprotein cholesterol (LDLc) have been also observed in ESRD patients [8]. These alterations in the lipid profile of CKD patients do not completely account for the number and severity of CVD events, which remain inappropriately high. Interventions in ESRD patients on dialysis with statins (3-hydroxy-3-methylglutaryl coenzyme A reductase inhibitors) provide limited protection for CVD events, despite the reduction in LDLc levels that is usually achieved [9].
HDL, as well as LDL, is a heterogeneous population of particles with different atherogenic or atheroprotective properties. It has been hypothesized that lipoproteins’ qualities (size, composition, and functionality) may be more important as CVD risk factors than their total circulating levels. HDLc and LDLc concentrations per se may not entirely reflect a beneficial or a risk profile for CVD. Data regarding the biology of these lipoproteins indicate that their subpopulations present different atherogenic/atheroprotective properties [10,11,12,13,14].

In a recent study by our group, in ESRD patients on dialysis, we found higher values of large HDL and lower intermediate and small HDL levels (Figure 1; Figure 1b vs. Figure 1a), despite lower (vs. control—Figure 1a) HDLc concentration [8]. Using the same technique (Lipoprint® kit), identical profiles of HDL subpopulations in ESRD patients were reported by others [41,42]. In our study [8], oxLDL and oxLDL/LDLc were inversely correlated with large HDL and positively correlated with intermediate and small HDL subpopulations, in agreement with the concept that HDL subpopulations have different antioxidant activities. We also found that adiponectin correlated positively with large HDL and negatively with intermediate and small HDL, suggesting that the enhancement in adiponectin induces a beneficial change, by favoring an increase in large HDL and a decrease in intermediate and small HDL subpopulations [8]. However, as stated previously, the possibility that the alterations in size and cholesterol composition of HDL subpopulations are not accompanied by improvement in their functionality cannot be ruled out. In normotriglyceridemic patients on hemodialysis (HD), a distribution of HDL towards an increase in large and less dense subpopulations, HDL2, was also reported [43].
Tsuzaki et al. [44] studied the association of adiponectin levels and of a single nucleotide polymorphism (SNP) of the adiponectin gene with the size of HDL subpopulations. The authors observed that adiponectin levels and SNP276 of the adiponectin gene may condition the size of HDL subpopulations; small HDL was found to correlate negatively, significantly, and independently with adiponectin and the SNP276 G allele [44]. These findings [44] and our data [8] suggest that a close relationship exists between adiponectin and HDL subpopulations.
As referred to previously, HDL can be also divided into HDL containing Apo A-I (but not Apo A-II) and HDL containing both Apo A-I and ApoA-II, which seems to be less cardioprotective [40]. Pre-β1-HDL is a minor subfraction of HDL containing Apo A-I, that contains neither Apo A-II nor the initial acceptor of cellular cholesterol in the process of reverse cholesterol transport [41]. Enhanced levels of pre-β1-HDL were observed in patients with stages 3a, 3b, and 4 of CKD, which clearly reveals disturbances in the metabolism of HDL in kidney disease [45]. Moreover, it was reported that, as the estimated glomerular filtration rate decreases, the ratio pre-β1-HDL/HDL containing Apo A-I without Apo A-II increases [45].
Controversially, Alabakovska et al. reported that in ESRD patients, HDL2b, the larger subpopulation, was reduced and HDL3c was increased [46]. Another study reported that HDL2 was significantly decreased in both CKD and ESRD patients, while HDL3 was higher in ESRD patients, as compared to controls [47].
Kidney transplantation, a common option for the treatment of ESRD patients, has been associated with improvement of the lipid profile [48]; however, data indicate that dyslipidemia still persists after transplantation [49]. Concerning HDL subfractions after kidney transplantation, Stefanovic et al. [50], conducting a study in children and adolescents with ESRD, reported that non-transplanted patients had lower mean HDL particle size, lower percentages of HDL2b, and higher percentages of HDL3a, 3b, and 3c subpopulations than post-transplantation patients, suggesting an atheroprotective effect for kidney transplantation [50].
A shift in HDL size towards larger subpopulations was found in patients with proteinuria [51], suggesting that proteinuria is associated with the loss of small HDL by the kidney; however, the impact of these alterations in cholesterol transport were not evaluated. It was also reported that HDL3 subpopulations decrease and oxidized HDL2 augments with increasing severity of CKD [52].
Doubts concerning which HDL subpopulation(s) are more or less atheroprotective still remain.

4. The Concept of HDL Dysfunctionality in CKD

The size, density, and composition of HDL subpopulations, modulating its functionality, are altered in numerous inflammatory- and oxidative stress-associated conditions, including CVD and CKD. How these changes interfere with HDL functions in CKD and in other diseases is still poorly understood. However, data indicate that these alterations in HDL subpopulations have a significant impact in the two-way association between kidney and cardiac dysfunction, known as cardiorenal syndrome.
The standardization of techniques to evaluate HDL quality is warranted to fully clarify if different HDL subpopulations present different functionalities and/or atheroprotective effects, as well as a uniform concept of HDL functionality. 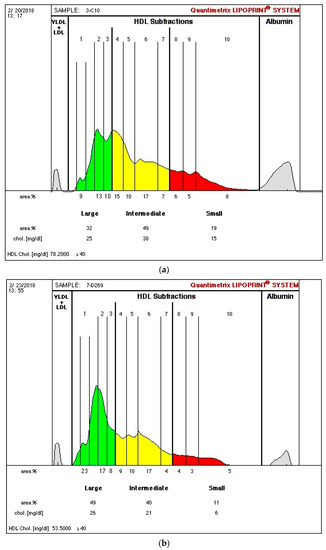