The immune system plays an essential role in the development and progression of atherosclerosis and related diseases, including coronary artery disease (CAD), peripheral artery disease, and stroke. Moreover, there is a growing body of evidence for the contribution of allergic mechanisms, such as those related to the immunoglobulin E (IgE) network, to the pathogenesis of atherosclerosis [1,2,3]. The IgE network comprises proteins associated with IgE activity, including its two principal receptors, the high- (FcԑRI) and the low-affinity IgE receptors [4,5].
Previous studies have demonstrated that the severity of CAD associates with total serum IgE levels [6,7,8]. In turn, atherosclerosis shares multiple pathophysiological features and risk factors with aortic (valve) stenosis (AS) [9,10,11], the most common acquired heart valve disease, and another chronic vascular inflammatory disorder [9,12]. Therefore, we hypothesized that AS severity may also be related to the IgE network. To verify this speculation, we sought to investigate the associations between AS severity and total serum IgE concentrations as well as the polymorphisms in the gene encoding the α-subunit of FcԑRI (FCER1A) representing the two tagging bins constituting the primary total serum IgE susceptibility loci [13,14,15,16].

A total of 115 consecutive patients with acquired AS, recruited between March 2015 and November 2017, represented the original study group, in which total serum IgE levels were assessed (Table S1). The Jagiellonian University Ethical Committee approved the study, and all the participants provided their written informed consent. AS was defined as a mean transvalvular gradient greater than or equal to 40 mm Hg and/or aortic valve area (AVA) less than 1 cm2 on the basis of transthoracic echocardiography, performed by an experienced cardiologist using a Vivid 7 ultrasound equipment (GE Healthcare, Chalfont St Giles, UK).
For the purposes of the genetic association study of AS severity, we enriched the original group with an additional 305 acquired AS patients, recruited for our previous studies between September 2009 and May 2012 [17,18], thus forming the expanded study group of 420 subjects in total (Table S2).
All patients were originally referred to either the Department of Cardiology, John Paul II Hospital, or the Department of Cardiovascular Surgery and Transplantation, Jagiellonian University School of Medicine, both in Krakow, Poland, for further diagnostic work-up, and all came from the Malopolska region in the south of Poland. The exclusion criteria were acute infection; Valsalva sinus aneurysm or rheumatic AS; known cancer; autoimmune or allergic disorders; endocarditis; previous cardiac surgery; liver failure with an alanine aminotransferase above the upper limit of the reference range; and a history of myocardial infarction (MI), stroke, venous thromboembolism, or bleeding.

DNA was extracted from whole blood or a buffy coat using the NucleoSpin Blood DNA Kit (Macherey-Nagel, Düren, Germany) according to the manufacturer’s protocol. FCER1A rs2252226 and rs2251746 variants were genotyped for the purposes of the present study using C_15886139_10 and C_1840470_20 TaqMan SNP Genotyping Assays (Applied Biosystems, Thermo Fisher Scientific, Foster City, CA, USA), respectively. Genotyping methodology has been validated in a control group comprising healthy individuals, as previously reported [19]. Both polymorphisms were successfully genotyped in AS patients with a call rate of about 98% and their genotypes remaining in Hardy–Weinberg equilibrium (HWE; Table S3).

3.1. Correlations between Total Serum IgE Levels and Echocardiographic Parameters in Acquired AS Patients

First, we sought to investigate whether the echocardiographic parameters correlate with total serum IgE concentrations in AS patients. Although a mean or maximum gradient and left ventricular ejection fraction were not associated with total serum IgE, we documented a positive correlation between IgE and aortic valve area (AVA; R = 0.27, P = 0.01; Table 1, Figure 1). This correlation remained significant also after adjustment for age, sex, BMI, and CRP levels (P <0.05).

3.2. Association between FCER1A Polymorphisms and AVA in Acquired AS Patients

3.3. The Effects of FCER1A Polymorphisms on Total Serum IgE in Acquired AS Patients

To our knowledge, relationships between IgE network and acquired AS severity have not been investigated thus far. However, on the basis of the mechanistic similarities between AS and CAD [9,10], as well as previously reported correlations between the severity of CAD and IgE levels [6,7,8], we speculated that similar relationships could also be observed in AS.
Indeed, we found significant and robust associations between the elements of the IgE network and AS severity, but their directions were opposite to what we had originally expected. Specifically, larger AVA indicating less advanced AS [20] correlated with increased serum IgE concentrations. Furthermore, the major allele of the rs2251746 polymorphism, known to be strongly associated with elevated total serum IgE levels [13,14,15,16], was related to the higher AVA. These are intriguing and unexpected findings requiring a comment.
An increase in FcεRI expression might lead to higher concentrations of IgE in serum, for instance, through the stabilizing effect of mast cell or basophil receptor on IgE upon binding [21,22]. This might mechanistically explain the association of the major allele of the rs2251746 polymorphism [4], shown to increase FCER1A promoter activity and thus FcεRI(α) expression [23,24], with higher total IgE in serum. Hence, our current results might suggest that higher total serum IgE and/or cell surface FcεRI expression levels protect against the development of more severe forms of AS. Mechanisms behind that effect remain unclear, particularly because numbers of mast cells in pathologically altered aortic valve tissue in AS correlate positively with disease severity, thus inversely with AVA [25]. However, it has been reported that cardiac mast cells are activated directly predominantly by noxious metabolic agents or neuropeptide substance P via MAS-related G protein-coupled receptor-X2 (MRGPRX2) and not through the IgE–FcεRI-dependent pathway [26,27,28,29,30]. Therefore, one might speculate that other FcεRI-expressing cell types might contribute to the protective role of the IgE network in AS progression, such as monocytes or macrophages. Monocytes play an essential role in each AS cardinal component, including inflammation, fibrosis, and calcification [31]. These cell populations may remodel tissue matrices, regulate fibrosis, and structural repair. Furthermore, active recruitment of circulating monocytes into the valve is increased with age, promoting differentiation into macrophages and degenerative valvular changes. In turn, although cross-linking of IgE-FcεRI complexes on monocytes might increase secretion of pro inflammatory tumor necrosis factor α (TNFα) and interleukin-6 (IL-6), it also significantly upregulates the production of IL-10, limiting the further development of inflammation. Moreover, IgE binding could critically impair these cells’ phagocytic function, a primary mechanism contributing to the tissue injury repair and extracellular matrix remodeling [32,33]. It is worth mentioning that patients with more severe AS are characterized by increased circulating monocyte numbers, which interestingly correlate with AVA [34]. Thus, monocyte-related inflammation seems to be critical in a more severe stage of the disease. Our outcomes indicate an auxiliary role of IgE network in this regulation, although extensive observational and experimental studies are needed to verify the above hypothesis. The findings and the speculations potentially providing them with some mechanistic explanations are presented in Figure 3.
Another possible explanation of the observed relationship might be a linkage disequilibrium between rs2251746 polymorphism and genetic variants in another gene localized distantly from FCER1A and not directly related to the IgE network. For example, a strong correlation was observed between a FCER1A polymorphism belonging to the same tagging bin as rs2251746 and the expression of OR10J5, a gene located about 250 kb upstream [35]. One cannot exclude a similar relationship between rs2251746 and another gene on chromosome 1, which is not directly related to the IgE network but has anti-inflammatory or immune modulating properties, slowing the AS progression. In this scenario, the effect of the rs2251746 polymorphism on serum IgE would be functionally meaningless, at least in the context of the AS severity, although higher total serum IgE could be used as a biomarker of the less severe AS. The contribution of other mechanisms, however, cannot be excluded.
Our study has several limitations. Most importantly, total serum IgE was not measured in all analyzed subjects. The reason behind this was the design of the study, with the original group (Table S1) being a screening group for detection of the association between IgE network and acquired AS severity and the expanded group (Table S2) designated for genetic association testing without IgE level analysis. Other limitations, such as a lack of a replication group or functional studies, make our results preliminary, matching the type of this report, i.e., communication.

We found for the first time the relationships between the elements of the IgE network and acquired AS severity. Specifically, higher AVA corresponding to the less advanced AS was associated with elevated total serum IgE levels or the major allele of FCER1A rs2251746 polymorphism. This intriguing observation is, however, preliminary and requires further investigation. Moreover, the mechanisms underlying our current results need to be elucidated.

This work was supported by a grant from the National Science Centre (UMO-2013/11/B/NZ5/00157); a grant from the Japan Society for the Promotion of Science (JSPS); the Myeloma Treatment Foundation Centre; and a Grant-in-Aid for Scientific Research (C) from the Ministry of Education, Culture, Sports, Science and Technology of Japan.

The study was conducted according to the guidelines of the Declaration of Helsinki, and approved by the Ethics Committee at the District Medical Chamber in Krakow (protocol no. 111/KBL/OIL/2014, December 12, 2014).

The authors declare that they have no known competing financial interests. 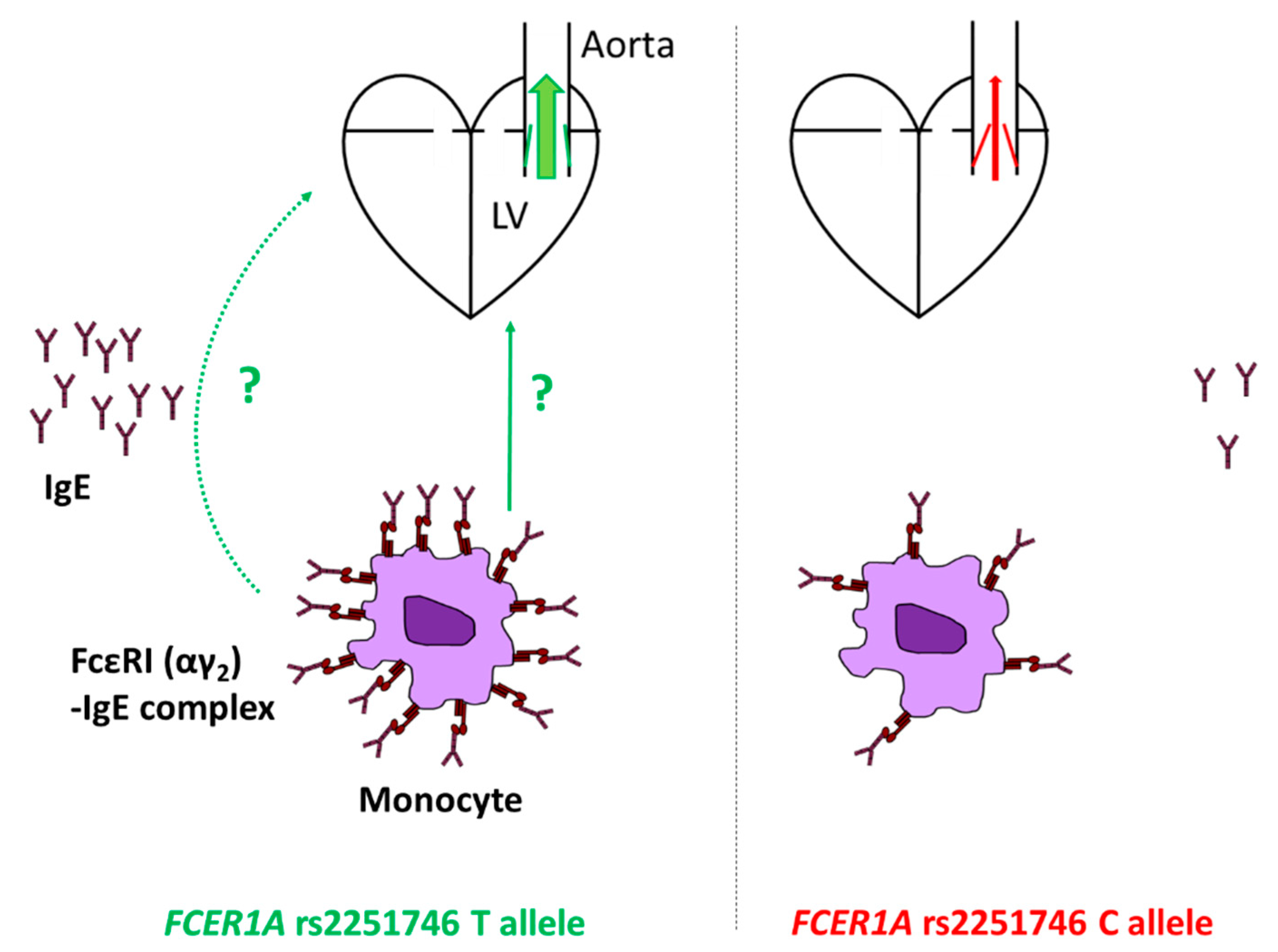