On the Critical Issues in Temozolomide Research in Glioblastoma: Clinically Relevant Concentrations and MGMT-independent Resistance
Previous Article in Journal

Temozolomide and Other Alkylating Agents in Glioblastoma Therapy

Temozolomide, a DNA methylating drug, is currently being used first-line in glioblastoma therapy. Although the mode of action of this so-called SN1 alkylating agent is well described, including the types of induced DNA damage triggering the DNA damage response and survival and death pathways, some researchers expressed doubt that data mostly obtained by in vitro models can be translated into the in vivo situation. In experimental settings, high doses of the agent are often used, which are likely to activate responses triggered by base N-alkylations instead of O6-methylguanine (O6MeG), which is the primary cytotoxic lesion induced by low doses of temozolomide and other methylating drugs in O6-methylguanine-DNA methyltransferase (MGMT) repair incompetent cells. However, numerous studies provided compelling evidence that O6MeG is not only a mutagenic, but also a powerful toxic lesion inducing DNA double-strand breaks, apoptosis, autophagy and cellular senescence. MGMT, repairing the lesion through methyl group transfer, is a key node in protecting cells against all these effects and has a significant impact on patient’s survival following temozolomide therapy, supporting the notion that findings obtained on a molecular and cellular level can be translated to the therapeutic setting in vivo. This comment summarizes the current knowledge on O6MeG-triggered pathways, including dose dependence and the question of thresholds, and comes up with the conclusion that data obtained on cell lines using low dose protocols are relevant and apoptosis, autophagy and senescence are therapeutically important endpoints. View Full-Text
Keywords: Temozolomide; alkylating agents; DNA repair; apoptosis; senescence Temozolomide; alkylating agents; DNA repair; apoptosis; senescence
►▼ Show Figures 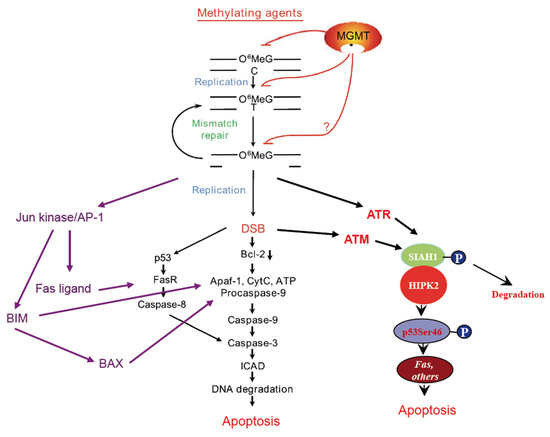