Use of Platelet Rich Fibrin (PRF)-Based Autologous Membranes for Tooth Extraction in Patients under Bisphosphonate Therapy: A Case Report
Previous Article in Journal

The atypical cyclin-dependent kinase 5 (CDK5) is considered as a neuron-specific kinase that plays important roles in many cellular functions including cell motility and survival. The activation of CDK5 is dependent on interaction with its activator p35, p39, or p25. These activators share a CDK5-binding domain and form a tertiary structure similar to that of cyclins. Upon activation, CDK5/p35 complexes localize primarily in the plasma membrane, cytosol, and perinuclear region. Although other CDKs are activated by cyclins, binding of cyclin D and E showed no effect on CDK5 activation. However, it has been shown that CDK5 can be activated by cyclin I, which results in anti-apoptotic functions due to the increased expression of Bcl-2 family proteins. Treatment with the CDK5 inhibitor roscovitine sensitizes cells to heat-induced apoptosis and its phosphorylation, which results in prevention of the apoptotic protein functions. Here, we highlight the regulatory mechanisms of CDK5 and its roles in cellular processes such as gene regulation, cell survival, and apoptosis. View Full-Text
Keywords: CDK5; p25 phosphorylation; p35; p39; neural apoptosis CDK5; p25 phosphorylation; p35; p39; neural apoptosis
►▼ Show Figures 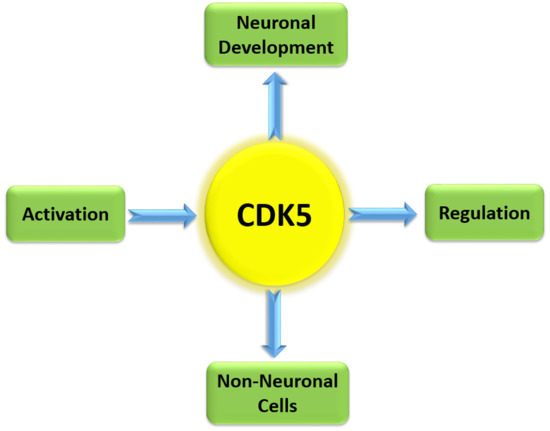