One Year in the Extreme Isolation of Antarctica—Is This Enough to Modulate an “Allergic” Sensitization?
Previous Article in Journal

Severe acute respiratory syndrome coronavirus 2 (SARS-CoV-2) is a serious threat to public health and the global economy. The World Health Organization (WHO) designated the coronavirus disease 2019 (COVID-19) outbreak as a pandemic in March 2020. [1]. To date, according to the WHO, the global cumulative number of novel coronavirus infection cases exceeds 300 million [2]. Rapid identification and isolation of patients diagnosed with SARS-CoV-2 infection is important to prevent nosocomial transmission. Real-time reverse transcription–polymerase chain reaction (qRT-PCR) of samples from nasopharyngeal swabs, sputum, various lower respiratory tract secretions, and saliva of patients is the most widely used diagnostic method for COVID-19 diagnosis [3]. Nevertheless, its adoption has been hindered by factors such as high cost, limited scalability, personnel training, and quality control measures [4]. Using the lateral flow assay (LFA) to diagnose SARS-CoV-2 infection offers a potential point-of-care option that may be obtained in near-infinite quantities and performed at the bedside in 10 min. However, its use in clinical settings has been under debate owing to its low sensitivity compared to qRT-PCR [5], and it requires an experienced operator, which influences the test performance [4].
We previously described a new LFA-NanoSuit method (LNSM) that works in conjunction with desktop scanning electron microscopy (SEM). It combines LFA with the NanoSuit method to prevent deformation of immunochromatography substrates, such as cellulose and residual liquid, resulting in fuzzy particle images when observed via SEM [6]. The NanoSuit method is a simple procedure for SEM examination of multicellular organisms, in which the sample is encased in a thin, vacuum-sealed casing that can be used for medicinal applications [7,8,9]. Moreover, unlike traditional SEM, the LNSM enables easy focusing and gathering of high-resolution images without the need for additional conductive treatment. For influenza A, the detection ability of the LNSM is comparable to that of qRT-PCR [6]. Here, we compared the detection capacity of various diagnostic methods for SARS-CoV-2 using laboratory and clinical samples from patients with SARS-CoV-2 infection, including the nasopharynx, nasal cavity, and saliva. Specifically, we analyzed the specificity and sensitivity of LFA compared with those of qRT-PCR via visual detection and LNSM.

An ImunoAce®® SARS-CoV-2 kit was used to detect the SARS-CoV-2 nucleocapsid protein (NP) antigen (TAUNS Laboratories, Shizuoka, Japan). Anti-mouse IgG antibody and anti-SARS-CoV-2 NP antibody were immobilized on chromatographic paper, whereas the other anti-SARS-CoV-2 NP antibody was tagged with colloidal gold/platinum (Au/Pt) and infiltrated into the sample pad. The sample pad was then attached to the end of the membrane. A positive line was detectable when Au/Pt nanoparticles (100–300 nm) were captured.

A total of 88 clinical samples from 45 suspected COVID-19 patients (Table 1) were examined using the ImunoAce®® SARS-CoV-2 kit and visual detection at Hamamatsu Medical Center and Hamamatsu University Hospital. Nasopharyngeal, nasal, and saliva samples were collected from the same individuals at Hamamatsu Medical Center (n = 65 from 22 patients) (Table 1: patient Nos. 1–22). Nasopharyngeal samples were obtained from 23 patients at Hamamatsu University Hospital (Table 1: patient Nos. 23–45). LFA and qRT-PCR samples were obtained separately for the same patient. The LFA tests were performed immediately after collecting the samples. The samples for qRT-PCR were stored in a transport medium at 4 °C in a refrigerator. The LFA kits were stored in a biosafety container at room temperature (20–25 °C). The study was conducted in accordance with the Declaration of Helsinki and was approved by the Ethics Committee of Hamamatsu University School of Medicine (No. 19–134 (14 July 2019), No. 20–250 (12 November 2020)) and Hamamatsu Medical Center (No. 2021-074) (31 August 2021) for studies involving humans.

Preparation Stock solution (1 mg/mL) of the human recombinant NP of SARS-CoV-2 (HEK293) and the His-tag C-terminus (Diaclone SAS, Besançon Cedex, France) was prepared. First, a series of working solutions (0, 0.1, 1, 10, 102, 103, 104, and 105 pg/mL) was prepared by diluting the stock solution with different volumes of buffer. Subsequently, the diluted solution buffer (120 μL) was slowly applied to the sample region of the test strip.

2.4. Method of Visual Detection for the Test Strip

Three drops (80–120 μL) of clinical sample solution and 120 μL of laboratory sample solution were gradually applied to the test strip sample area to determine the diagnostic cut-off point. Results obtained within 10 min were deemed valid and those obtained after 15 min were deemed invalid. Two investigators read the test line and classified it as “positive”, “negative”, or “positive to undetermined”. The investigators were blinded to the results of each type of test when samples were obtained from the same individual.

The intensity of the test lines on the test strips was determined using an Immunochromato-Reader C10066–10 (Hamamatsu Photonics, Hamamatsu, Japan). The values are expressed in milli-absorbance units (mABS).

As previously described [6], the LFA kit’s cellulose pad was coated with a modified NanoSuit®® solution with Tween-20-based components (Nisshin EM Co., Ltd., Tokyo, Japan), mounted on the wide stage of the specimen holder, and then placed under a desktop scanning electron microscope (TM4000Plus, Hitachi High-Technologies, Tokyo, Japan). Backscattered electron detectors, operating at 10 or 15 kV and 30 Pa, were used to capture the images [6].

Statistical analysis using Student’s t-test was carried out using Microsoft Excel version 16.57 (Microsoft, Redmond, WA, USA). A receiver operating characteristic (ROC) curve was created and analyzed using software from International Business Machines Corporation’s statistical package for social sciences (IBM Corp., Armonk, NY, USA). The ROC curve was used to compare the accuracy of the diagnostic test with that of a reference/gold standard test. MedCalc (MedCalc software, Ostened, Belgium) was used to conduct the statistical analysis of the sensitivity and specificity of the assay at a 95% confidence interval (CI). Limit of detection (LOD) was defined as the mean blank signal plus 3.3-times the standard deviation (SD) of the blank (LOD = meanblank + 3.3 × SD blank) [12].
The average number of particles from test line (TL) and background area (BA) were compared by counting six fields of view at 1200× magnification. According to the observational data and statistical analysis, if there was more than one particle on an average in a single visual field (1200×), and the average ratio of TL/BA was >2, the result was considered positive. The approximation line, correlation coefficient, and null hypothesis were calculated using Excel (Microsoft).

Diagnostic kits were prepared to test the sensitivity and specificity of SARS-CoV-2 diagnosis (Figure 1a). A black line formed on the test strip when the Au/Pt particles combined with SARS-CoV-2 antigen in clinical samples, which were placed on the sample pad in lysis buffer, indicating the presence of the desired antigen in the sample (Figure 1b). NanoSuit solution was then introduced upstream of the test line (Figure 1b), causing a thin layer of NanoSuit liquid to develop (Figure 1b,e). The LFA kit was installed on a sample stage of a desktop scanning electron microscope to be as close as possible to the camera (Figure 1c). At set distances from the control line boundary, the TL and BA observation stations were established. The observation areas were defined as the areas with the highest number of TL signals. The TL observation line was 5.9 mm from the right edge of the control line and the BA observation area was 6.3 mm from the right edge of the control line (Figure 1d). The average number of particles from TL and BA were compared by counting six fields of view at 1200× magnification. The electron beam penetrated the NanoSuit layer, as shown in Figure 1e, and released considerably more backscattered electrons from the Au/Pt particles than from the cellulose surface.

3.3. Determination of the Diagnostic Cut-Off Point

According to our findings, the LNSM, including the recently developed SARS-CoV-2 LFA, can be effectively employed for the automated quantitative measurement of SARS-CoV-2 antigens. Overall, the LNSM can help advance the use of LFAs for the rapid diagnosis of new infections and may be applicable to other infectious diseases.

This research was funded by The Japan Science and Technology Agency (JST), Program for Creating STart-ups from Advanced Research and Technology (START) (grant number 714 to H.K.), the Japan Agency for Medical Research and Development (AMED), Translational Research Strategic Promotion Program Seeds A (grant number A508 to H.K.), and the Nakatani Foundation, Emergency support: Countermeasures against new coronavirus infectious diseases Grant program to H.K.. The financial sources had no involvement in the study design, data collection, analysis or interpretation, report writing, or the decision to submit the article for publication.

The raw data supporting the conclusions of this study will be made available by the authors without undue reservation. 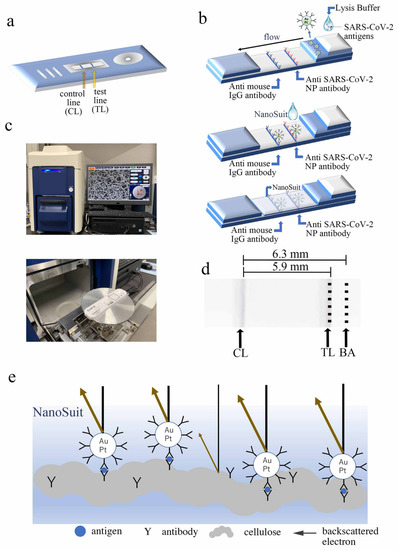 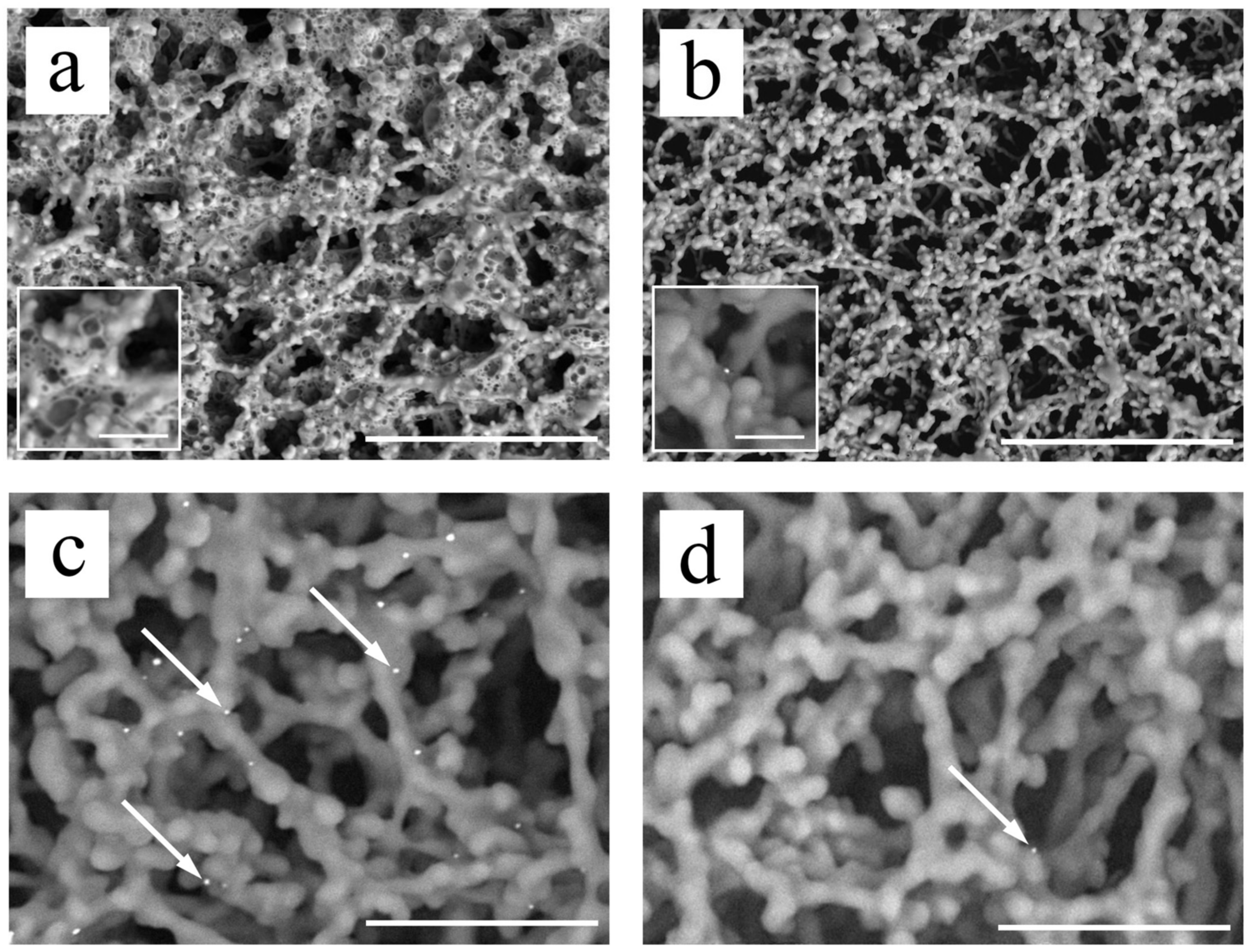 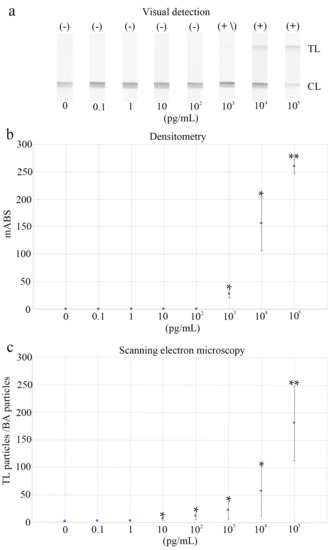 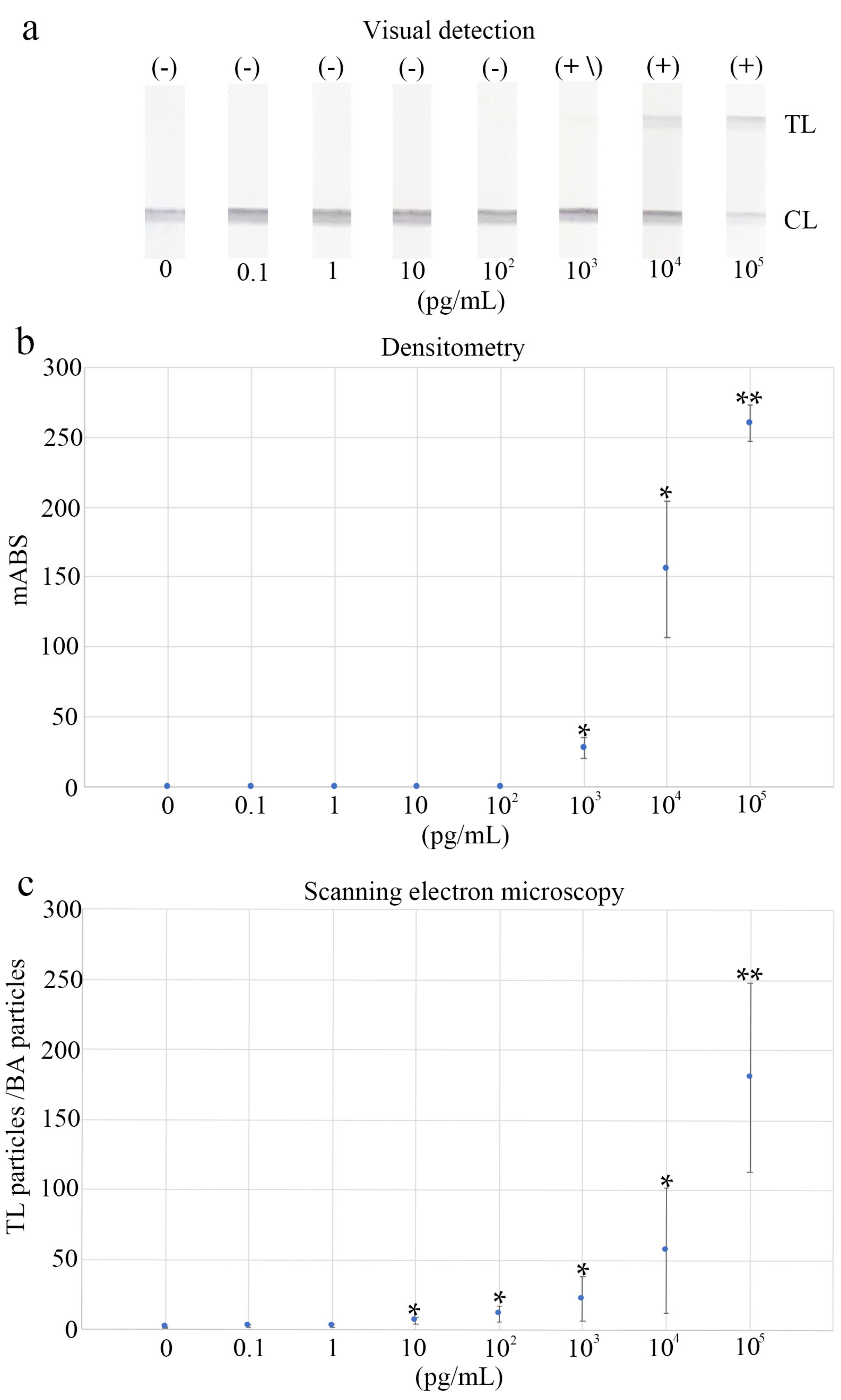 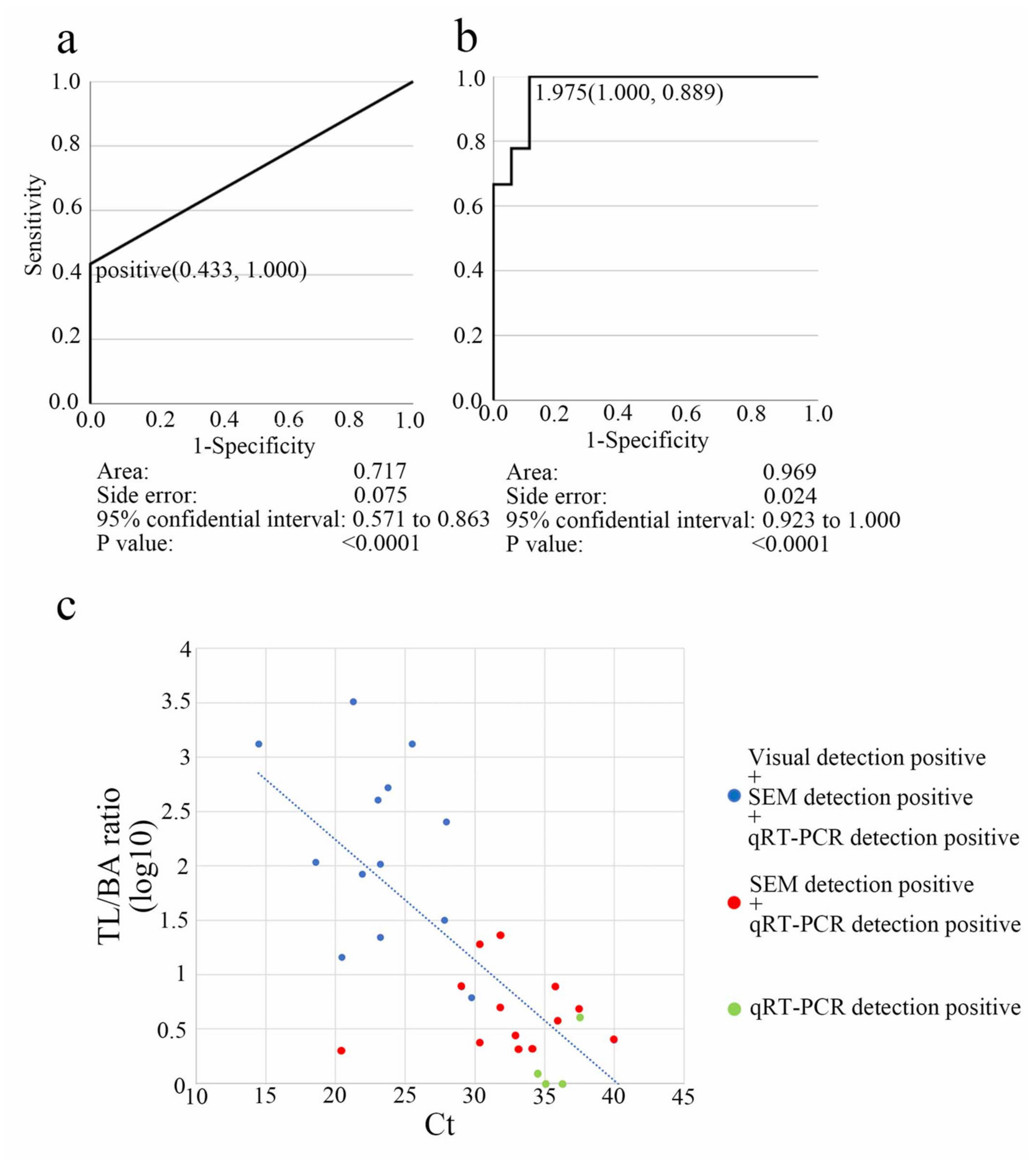 Table 3. SEM diagnosis with qRT-PCR and visual detection using LFA.
Table 3. SEM diagnosis with qRT-PCR and visual detection using LFA.
Abbreviations: LFA, lateral flow assay; qRT-PCR, real-time reverse transcription–polymerase chain reaction; SEM, scanning electron microscopy. a Number of samples in each setting are indicated. b kappa coefficient: the extent of agreement between frequencies of two sets of data collected on two different occasions.
© 2022 by the authors. Licensee MDPI, Basel, Switzerland. This article is an open access article distributed under the terms and conditions of the Creative Commons Attribution (CC BY) license (https://creativecommons.org/licenses/by/4.0/).
We use cookies on our website to ensure you get the best experience. Read more about our cookies here.
Accept
We have just recently launched a new version of our website. Help us to further improve by taking part in this short 5 minute survey here. here.
Never show this again