Development of an ImmunoFET for Analysis of Tumour Necrosis Factor-α in Artificial Saliva: Application for Heart Failure Monitoring

Assessing tumour necrosis factor-α (TNF-α) levels in the human body has become an essential tool to recognize heart failure (HF). In this work, label-free, rapid, easy to use ImmunoFET based on an ion-sensitive field effect transistor (ISFET) was developed for the detection of TNF-α protein. Monoclonal anti-TNF-α antibodies (anti-TNF-α mAb) were immobilized on an ISFET gate made of silicon nitride (Si3N4) after salinization with 11-(triethoxysilyl) undecanal (TESUD). The obtained ISFET functionalized with the mAbs (ImmunoFET) was used to detect TNF-α protein in both phosphate buffer saline (PBS) and artificial saliva (AS). The change in the threshold voltage of the gate (∆VT) showed approximately linear dependency on the concentration of the antigens in the range 5–20 pg/mL for both matrixes. The cross-selectivity study showed that the developed ImmunoFET demonstrated to be selective towards TNF-α, when compared to other HF biomarkers such as N-terminal pro-brain natriuretic peptide (NT-proBNP), interleukin-10 (IL-10), and cortisol, even if further experiments have to be carried out for decreasing possible unspecific absorption phenomena. To the best of our knowledge, this is the first ImmunoFET that has been developed based on Si3N4 for TNF-α detection in AS by electrical measurement. View Full-Text
Keywords: ImmunoFET; tumour necrosis factor-α; heart failure; saliva analysis; TESUD ImmunoFET; tumour necrosis factor-α; heart failure; saliva analysis; TESUD
►▼ Show Figures 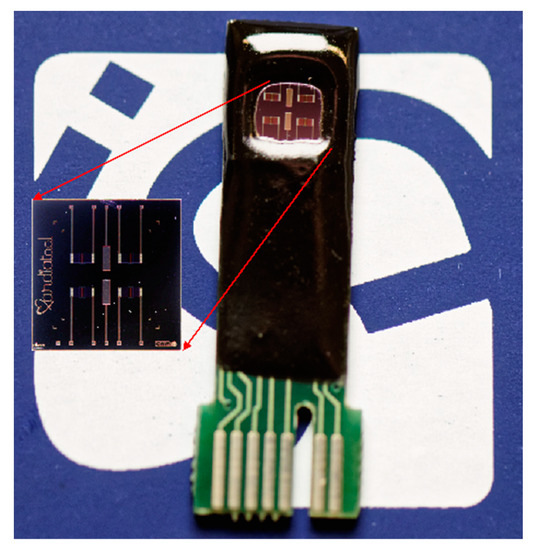