Can Social Media Be Used as a Community-Building and Support Tool among Jewish Women Impacted by Breast and Ovarian Cancer? An Evidence-Based Observational Report
Previous Article in Journal

Trends in the Prescription of Benzodiazepine Receptor Agonists from 2009 to 2020: A Retrospective Study Using Electronic Healthcare Record Data of a University Hospital in Japan
Previous Article in Special Issue

Association between Teenage Pregnancy and Family Factors: An Analysis of the Philippine National Demographic and Health Survey 2017

Adolescence is a key developmental period in one’s life course; health-related behaviors of adolescents can be linked to lifelong consequences, which affect their future health. Previous studies highlight the role of family and its significant association with adolescents’ health. In East Asia and the Pacific, the Philippines is the only country that is showing an upward trend of teenage pregnancy while other countries in the region have declining teenage pregnancy rates. Against this backdrop, this study investigated the association between teenage pregnancy and family factors, specifically parent structure. Data for the study were extracted from the Philippine National Demographic and Health Survey 2017. All adolescent women aged 15–19 years old (n = 5120) were included in the analyses. The dependent variable was teenage pregnancy, while parent structure, defined as a presence or absence of parents in the domicile, was the exposure variable. Multivariable logistic regression was utilized in assessing the association of teenage pregnancy and family factors after adjusting for several potential confounders. Adolescent women were more likely to become pregnant as a teenager when they lived with neither parent (aOR = 4.57, 95% CI = 2.56–8.15), were closer to 19 years of age (aOR = 2.17, 95% CI = 1.91–2.46), had knowledge of contraception (aOR = 1.27, 95% CI = 1.22–1.32) and lived in a big family (aOR = 1.14, 95% CI = 1.09, 1.20). Furthermore, adolescent women who lived with neither parent and belonged to the poorest wealth quintile were more likely to become pregnant as a teenager (aOR = 3.55, 95% CI = 1.67–7.55). Conversely, educational attainment higher than secondary education (aOR = 0.08, 95% CI = 0.01–0.49) and those who belonged to the richest wealth quintile (aOR = 0.40, 95% CI = 0.18–0.92) exhibited a statistically inverse association with teenage pregnancy compared with those with no education and from the middle wealth quintile, respectively. Living with neither parent was found as a risk factor for teenage pregnancy. Furthermore, we found that several sociodemographic factors exhibited a non-uniform increment and reduction in the risk of teenage pregnancy. View Full-Text
Keywords: teenage pregnancy; risk factors; parent structure; demographic health survey teenage pregnancy; risk factors; parent structure; demographic health survey
►▼ Show Figures 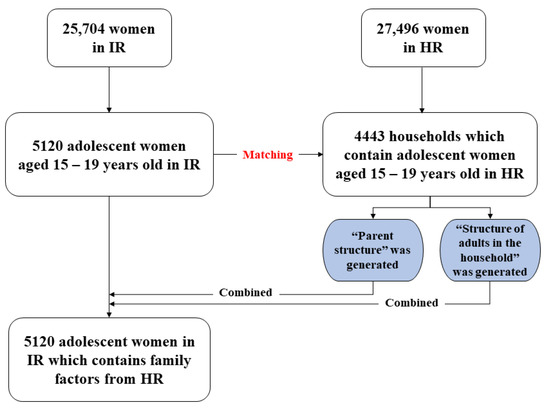