Taking Another Look: Thoughts on Behavioral Symptoms in Dementia and Their Measurement

Background: Craniosynostoses are congenital defects in the construction of the skull involving premature fusion of one or more cranial sutures. Premature fusion of sutures causes characteristic skull deformation(s). This affect the structure and thus the appearance of the entire head and face. The aim of this study was to analyze parents’ subjective assessments of head and facial appearance in children with craniosynostoses before and after surgery. Parents also assessed the interpersonal relationship of their children with peers and adults (after surgery). Methods: This study was conducted among parents of 230 children treated in Poland, in two multidisciplinary centers. Detailed statistical analysis was conducted among children who had undergone surgery. Independent variables were age (at survey) of the child (three years and less, four years, and five years and more) and type of craniosynostosis (isolated and syndromic). A chi-square independence test was used. Data was collected using surveys. Results: In the opinion of most parents, the appearance of their child’s head and face after surgery did not differ or differed only slightly from that of their peers. The results of subjective assessment of appearance of children’s face and head after reconstructive treatment remains comparable in three subgroups of patients according to the age. It seems that specific head shape according to the type of craniosynostosis does not have an impact on relations with peers and adults. Conclusion: Surgical treatment of children with craniosynostoses improves the appearance of their head and face. This improvement seems not to depend on the type of isolated craniosynostosis, and is constant over time.
Keywords: craniosinostosis; results of surgery; craniofacial disfigurement; clinical survey; subjective assessment; surgical outcomes craniosinostosis; results of surgery; craniofacial disfigurement; clinical survey; subjective assessment; surgical outcomes

Especially important to identity is the face, which in contrast to the rest of the body is always exposed [1]. This means that “the face tells others about who we are” [2]. The face plays a key role in building and maintaining social relations. An atypical or distorted face may cause problems in social interactions and affect individual self-esteem [3,4,5].
Numerous studies show that craniofacial disfigurement affects various aspects of the lives of those suffering therefrom as well as their loved ones. Parents of children with craniofacial anomalies may fear the reactions of others to the appearance of their child, and wonder whether their child will be accepted. Furthermore, parents may find it difficult to talk frankly with their child about his or her craniofacial differences, and/or become overprotective [6] (pp. 93, 98). Children with craniofacial disfigurement are more prone to negative self-perception and low self-esteem [6] (pp. 93–94) [7]. Adolescents with craniofacial anomalies feel less attractive, and are ridiculed by their peers [8,9,10,11,12].
Facial disfiguration can be congenital or acquired [6]. Acquired disfigurements can be caused by injury, disease, or surgical treatment (e.g., scars). One example of congenital malformation of the entire head and the face is craniosynostoses.
Craniosynostoses are a heterogenous group of congenital diseases occurring in one out of every 2000–2500 live births. Although they are the second most common group of facial and skull defects after orofacial clefts, their frequency classifies them as a rare disease [13,14].
The surgical treatment of children with craniosynostoses is based on multidisciplinary reconstruction of the skull, including reconstruction of the upper and/or middle part of the face.
The aim of this study was to analyze parents’ subjective assessments of the appearance of the head and face of children with craniosynostoses. The interpersonal relationships of these children were also assessed. More specifically, we will focus on: (1) if there are any statistically significant differences in subjective assessment of the child’s head and face appearance before and after surgical correction; (2) if specific etiology of craniosynostosis (syndromic vs. non-syndromic) is responsible for objective assessment of the child’s head and face; (3) if the age of the child influences the assessment of the head and face appearance; and (4) if the children with craniosynostoses after head reconstruction had problems with social relations with peers and adults.

The study was conducted among parents of children with various types of craniosynostoses treated in Poland, in two multidisciplinary centers: the John Paul II Upper Silesian Child Health Centre in Katowice; and the Craniofacial Treatment Centre in Olsztyn. Over 60% of Polish children with craniosynostoses are treated in these centers. The sample group consisted of 230 children with various craniosynostoses. Inclusion criteria consisted of diagnosis of craniosynostosis made by pediatric neurosurgeon according to clinical examination and 3D-CT scan. We exclude children with any other than non-syndromic or syndromic craniosynostosis abnormalities.
Data was collected using surveys. Surveys were conducted during control visits in craniofacial centers. Parents were asked to complete the questionnaire anonymously. The questionnaire (see Appendix A) consisted of three sections, concerning: (1) Basic child data—gender, age at the time of survey (the children were divided into three subgroups according to age: three years and less; four years; and five years and more), type of craniosynostosis (sagittal, metopic, unicoronal, bicoronal, lambdoid, complex, genetic syndrome). The parents of children who had undergone surgery were also asked to assess: (2) the head and facial appearance of their children before and after surgery and (3) child’s interpersonal relationship after surgery. The response rate was 91%.

3.2. Parent Assessment of Head and Facial Appearance before and after Surgery

3.3. Influence of Type of Craniosynostosis on Parents’ Assessment of Head and Facial Appearance before and after Surgery

3.4. The Children’s Age (at the Moment of Survey) and Assessment of Head and Facial Appearance after Surgery

3.5. Parents’ Assessment of Their Child’s Interpersonal Relationships after Surgery

Parents do not view their children had problems relating to other children (86.2%), or adults (86.2%) (details are presented in Table 5). They also declared that their children “really like” or “like” to play with peers (64.6% and 27.3%, respectively). Only 2.4% of parents declared that their child “really does not like” or “does not like” to play with peers. Likewise, 85% of parents declared that their child’s peers “really like” or “like” to play with their child (28.8% and 56.3%, respectively) (data not presented in the table).
Within the individual age groups, there were no statistically significant differences in relations between peers and adults. However, there was a statistically significant reduction in the frequency of negative reactions of both peers (p = 0.014) and adults (p = 0.001) to the head shape of children with syndromic craniosynostoses after such treatment. This was not true in case of willingness to play with and relate to peers and adults. The type of isolated craniosynostosis did not seem to have an impact on relations with peers or adults, or their reactions to head shape.

One of major limitations of this survey is that it is conducted after surgery, not both before and after surgery. The bias may thus be introduced based upon our clinical experience. This study analyzed the opinions of parents of children with craniosynostoses. Due to the age of the children, the children themselves were unable to assess the appearance of their head and face, or their interpersonal relations. We are planning to study this in the future, and correlate the results with the assessments of their parents. The size and age distribution of the analyzed group did not allow for comparison of children who had undergone surgery with those who had not (there were only a few such children, and they were very young). Finally, separate analysis of children with genetic defects as part of syndromes may provide more specific insight into this extremely heterogenous group.

D.L. and E.N. contributed equally to do the research and write this paper.

The authors would like to acknowledge the respondents for participating in this study.

Questions for parents with child after surgery 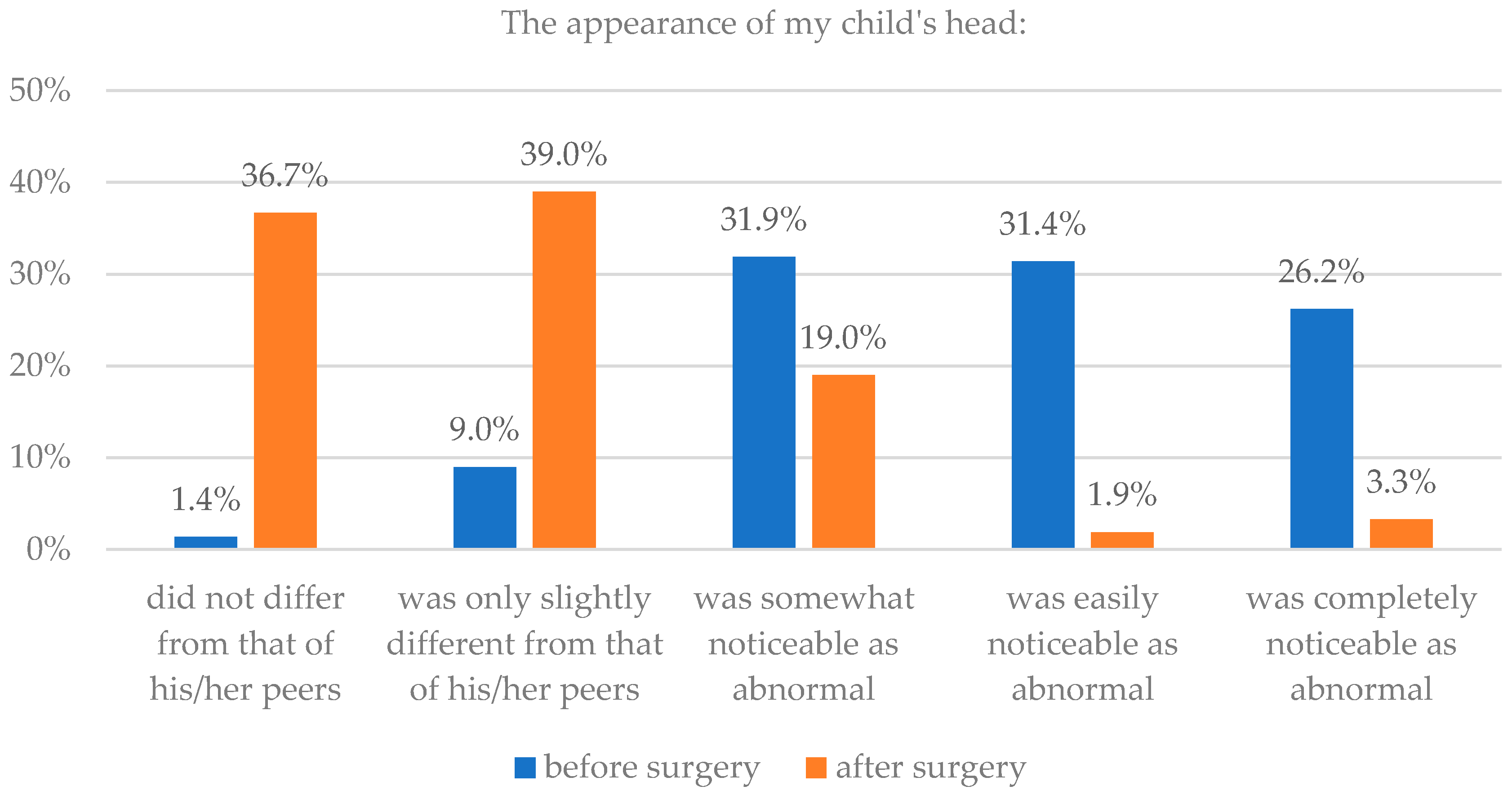 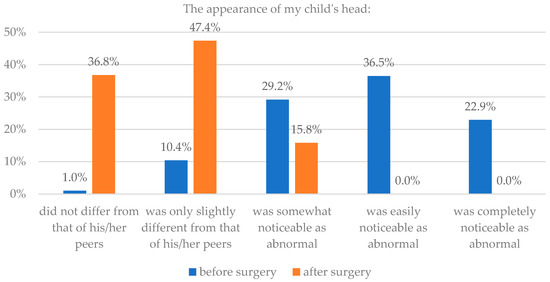 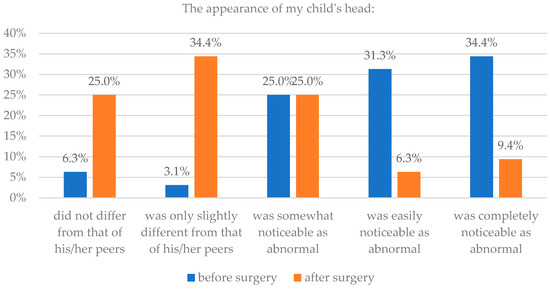 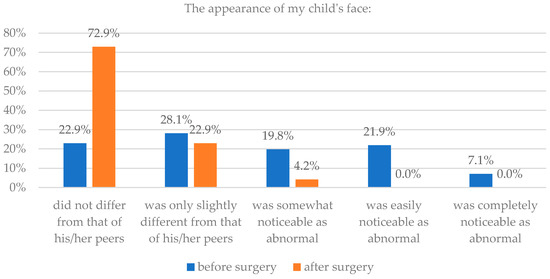 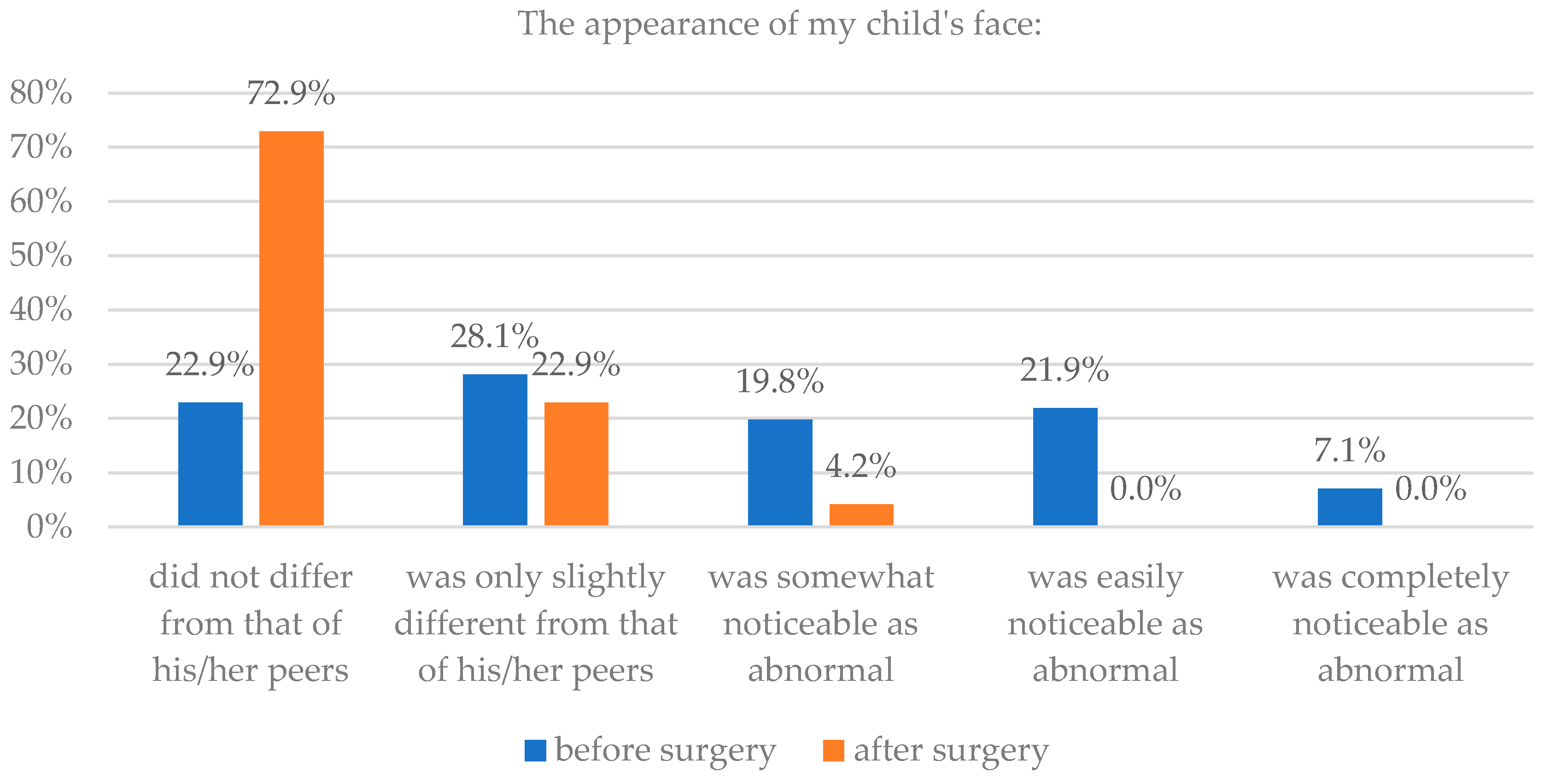 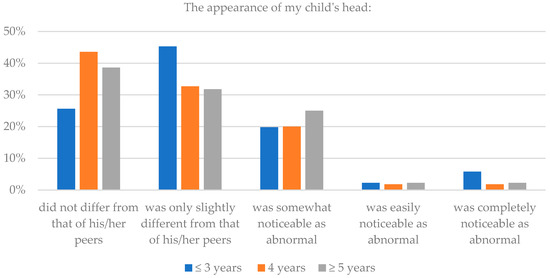